Curiosity and Cravings at Club Syn

Curiosity is the name of the wicked, little game that starts off most games of chase in the world of sex. A man wanders into a place filled with carnal treats from nearly naked dancers to a stunning queen whose deep, raspy voice could tempt him to syn in ways he’d never imagined.

Yet, a sensual liaison is so much more than that orgasmic end. It is the unspoken gazes, the wicked thoughts, and the forbidden touches that stroke the reader until their minds explode with the same intense release. So I invite the readers to step into Between the Lies and experience the build-up to each explosive moment of discovery. Come visit Club Syn and uncover your curiosity. 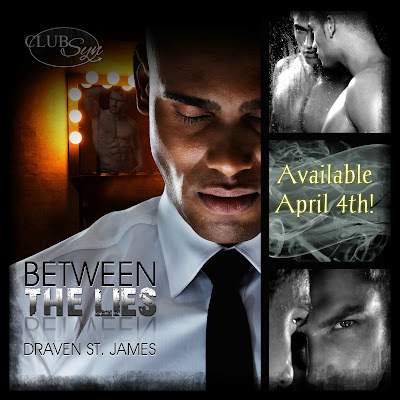 Between the Lies
Professor Graham Darrius leads a double life, everyday he enriches the lives of students, but at night he struts the stage as Ebony Powers at Club Syn. The two personas cannot mix, which is an easy rule to follow until a sexy man from Iowa stumbles through the door.

Spencer Neil, has never stepped foot into a gay bar and holy shit did he get more than he’s ever imagined. What did he know about drag queens, go-go boys and heated exchanges in dark corners? The world he lives in is academic and predictable. At least until he meets Graham, and sees that sometimes all is not what it seems.

Beneath the shock of discovery, misunderstandings, and wicked instruction Graham finds himself falling for Spencer and Spencer finds he’s getting a whole different kind of education.

Excerpt from Between the Lies

He didn’t bother looking at himself in the mirror; he could imagine the desperation he’d see. Instead he stalked over to one of the stalls and slammed the door behind him. Hands on the wall, he breathed in deeply through his nose, trying to calm his overheated body.

A glance over his shoulder revealed the stall lock remained open, although he’d closed the door. Only an idiot would leave it open. Hell, anyone could walk into that bathroom. Then what would he do? Or maybe Ebony had just been fucking with him. Reaching for the lock, he stared at the dingy metal, his fingers hovering… His hand twitched as he considered his options—latch the lock in place, or reach for his zipper to take care of his problem. Glaring at the bulge in his jeans, he shook his head. Why couldn’t his horny side stay in for the night? Why tonight? Why Ebony?

A squeak and slam told him someone else had joined him in the bathroom. The click-clack of heels on the cement floor made his heart pound.

“Iowa,” Ebony’s raspy voice teased when the door behind him opened. “I’m surprised you didn’t heed my warning, or were you hoping to get me alone?”

Spencer’s head dropped forward. God, his cock throbbed at the feel of Ebony’s body so near. The spicy scent of Ebony’s perfume filtered through his aroused brain. He couldn’t get his muscles to cooperate and turn to face his temptation.

“You’re giving off some mixed signals with your silence, hon.”

The touch of fingers along his back had him tensing with need but chained by confusion. He bit his lip to hold in whatever whimpered plea might have escaped. He’d spent years suppressing his sexual nature, so the tendency toward silence was automatic by now. It was far more difficult to make himself let out noise of any kind, much less anything intelligible.

“I may be a lot of things, but I don’t seduce unwilling men.” Ebony’s soft caress left his body, and Spencer swayed toward the touch.

“Stay,” Spencer whispered before he could rethink the word, but he knew he meant it. Whatever Ebony had to offer him, his body sure as hell wanted…needed.

The warmth of Ebony’s body caged him in the small space, like a furnace. The click of the lock being set into place had his heart speeding. What am I doing?

“And what would you have me do?” Ebony murmured, pressing close enough Spencer could feel the definite outline of a hard-on against his ass. “With you all alone in here?” 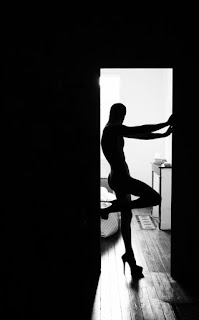 Between the Lies will be available April 4th from Amazon.