I’m an Okie through and through. Well, with maybe a little influence from Arkansas, Texas, and perhaps even southern Germany. I’ve lived in all those places, so they must have impacted me somewhat. But now New Mexico, my permanent home, is the primary influence. It’s a good place to foster my long-held interest in Native American cultures. Historical events and cross-cultural relationships are crucial to the plots of the Wildyr books. Thus far, I’ve published 60 or so short stories, a novella, and 7 novels. I try to give back to the literary community by teaching a free writing class every Monday afternoon at an Albuquerque multigenerational center.

The following scene takes place in Chapter 3 as Roger Mackie, a Denver architect, and his young Chippewa rider named Johnny Two-Guns continue down I-15 toward Arizona.

Upon spotting a rest area, I wheeled the car off the highway and parked near the toilets beside the only other vehicle in the lot, an old Ford Taurus rife with rust and Bondo.

“I need to take a leak, and then we’ll switch places if you don’t mind.”

Johnny grunted a reply and got out to stretch his legs.

I got bad vibes as soon as I entered the restroom. Two men in their middle twenties stood at the sinks combing their hair. I didn’t even make it to the urinal before my fears were confirmed.

“Hey, buddy,” the one nearest me called. “You help a fella out? We’re busted and need some gas money.”

There was no sense in giving them gas money because that wasn’t what they were after. They wanted everything. “Sorry. Hell, I was hoping you could help me out. Nobody leaves Las Vegas with any money.”

The second one gave a sneer. “Ain’t he cute? Guy driving a Mercedes claiming he’s broke. You got credit cards.”

“All maxed out,” I said. “I really took a beating at the tables.”

“If they’re maxed out, you won’t mind giving them to us.”

“Think the bank would appreciate me holding on to them.”

They approached, staying well apart. The nearer one spit on the floor and held out his hand. “You gonna give them to us one way or the other. Won’t rough you up too much, you do it the easy way.”

I grabbed his hand and pulled it sharply. He reeled forward and met the wall. He let out a yell and stumbled backward. His buddy started for me, but a shadow moved behind him. Johnny swung him around and clubbed him with a right. The first one was mad now, and bent on doing some damage. He lunged for me, but I got out of the way and slugged him in the kidneys.

I can’t say that we really beat them, but we fought them to a draw. The punk Johnny had been handling pulled a knife, and I was gratified to see the man’s eye was swelling shut and his nose was bleeding. My opponent was relatively unscathed except for the raw place where his cheek had met the wall. When Johnny picked up a heavy trash can, the two thugs decided it was time to find easier prey. We followed them outside to make certain they didn’t do any damage to my car and watched them race out onto the highway toward Las Vegas.

I looked at Johnny. He was unmarked. He looked at me. We both laughed at the same time. Pure adrenaline.

“I gotta hit the urinal or I’m gonna pee my pants!” I ran for the toilet.

“Me too!” Johnny followed on my heels.

Standing there at the open urinal, peeing and laughing from relief and nervousness, I glanced at his big, uncircumcised cock. I noticed that he took a quick peek at mine. There went those butterflies again!

And so Rog gets a first look at what he’s beginning to understand he wants. Not sure who’s the true innocent here, the Denver architect or the shy Montana kid? Here are some links where you can learn a little more about me and my writing. 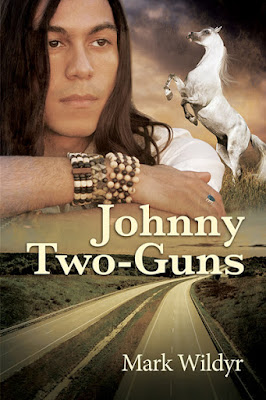 When vacationing Denver architect Roger Mackie rolls into a quaint old trading post in Montana’s Bitterroot Mountain Range to gas up his car, it’s the start of a life-changing journey. Lean, handsome Chippewa Johnny Two-Guns is looking for a ride. He’s on a mission to recover some clan treasures. Roger is immediately smitten and drives Johnny all the way to Arizona.

Although the two successfully build a friendship, Roger is unable to initiate the intimacy they both seem to desire. A second visit gives Roger another chance to draw Johnny out of his shell. The payoff is spectacular, leading to a week of sex and discovery, during which Johnny’s innocent enthusiasm shows Roger a new side of love between men. But trouble is on the horizon for the new couple, as fate seems set against them. And what does the sudden appearance of sexy young architect Brad Beaver portend for the future?

Johnny Two-Guns is available from Dreamspinner Press in Ebook and Paperback formats.