Monday Tour Stop with Garrett Leigh and Between Ghosts

Join us as we turn the spotlight on Between Ghosts the latest release from Garrett Leigh.  And don't forget to check out the giveaway! 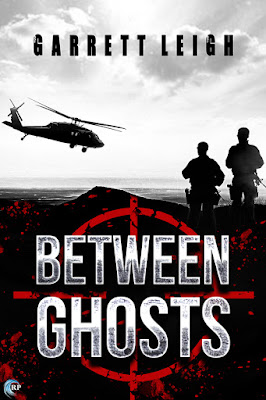 In 2003, journalist Connor Regan marched through London to add his voice to a million others, decrying the imminent invasion of Iraq. Eight months later, his brother, James, was killed in action in Mosul.

Three years on, Connor finds himself bound for Iraq to embed with an elite SAS team. He sets his boots on the ground looking for closure and solace—anything to ease the pain of his brother’s death. Instead he finds Sergeant Nathan Thompson.

Nat Thompson is a veteran commander, hardened by years of combat and haunted by the loss of his best friend. Being lumbered with a civilian is a hassle Nat doesn’t need, and he vows to do nothing more than keep the hapless hack from harm’s way.

But Connor proves far from hapless, and too compelling to ignore for long. He walks straight through the steel wall Nat’s built around his heart, and when their mission puts him in mortal danger, Nat must lay old ghosts to rest and fight to the death for the only man he’s ever truly loved.

Between Ghosts is available from Riptide Publishing

Garrett Leigh is a British writer and book designer, currently working for Dreamspinner Press, Loose Id, Riptide Publishing, and Black Jazz Press. Her protagonists will always always be tortured, crippled, broken, and deeply flawed. Throw in a tale of enduring true love, some stubbly facial hair, and a bunch of tattoos, and you’ve got yourself a Garrett special.
When not writing, Garrett can generally be found procrastinating on Twitter, cooking up a storm, or sitting on her behind doing as little as possible. That, and dreaming up new ways to torture her characters. Garrett believes in happy endings; she just likes to make her boys work for it.
Garrett also works as a freelance cover artist for various publishing houses and independent authors under the pseudonym G.D. Leigh. For cover art info, please visit blackjazzpress.com.
Social media:
Website: http://garrettleigh.com
Twitter: https://www.twitter.com/Garrett_Leigh
Facebook: https://www.facebook.com/garrettleighbooks
Cover art enquiries: blackjazzdesign@gmail.com

Leave a comment for a chance to win $20 in Riptide credit. Entries close at midnight, Eastern time, on March 19, 2016. Contest is NOT restricted to U.S. Entries. Thanks for following the tour, and don’t forget to leave your contact info!