Character Development in the Bedroom

I have written a number of guest posts in my career and I want to thank the awesome folks at Cup O Porn for having me.  Given the name of the blog, I decided to write a different kind of post.  When I develop my characters, in addition to the usual type of characteristics, I also develop characters sexual profile.  Everyone behaves and likes different things in bed, so I like to include those characteristics as part of character development and it goes beyond simple top or bottom or whether they are vanilla or kinky.  I include details about kissing, biting, strength or gentleness, what characters like and what they don’t.

Sometimes characters are quiet most of the time and I think they’re going to be the same in the bedroom, and lord, they’re large and in charge.  I have had huge, strong characters who are meek and quiet in bed as well as slighter men with huge… egos, and small guys who are determined to take control.  I really love when characters throw me a curve and surprise me.   That doesn’t happen very often, but sometimes once I’ve developed the characters and I’m actually writing the story, the characters will have a mind of their own and the entire profile can go out the window.  That’s’ okay as well.  Let the characters speak to you both in and out of the bedroom and you can’t go wrong. 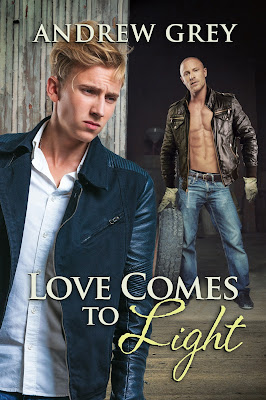 Artist Arik Bosler is terrified he might have lost his creative gift in the accident that left his hand badly burned. When he’s offered the chance to work with renowned artist Ken Brighton after winning a contest, Arik fears his injury will be too much to overcome.

He reluctantly travels to Pleasanton to meet Ken, where he runs into the intimidating Reg Thompson. Reg, a biker who customizes motorcycles, is a big man with a heart of gold who was rejected by most of his family. Arik is initially afraid of Reg because of his size, however it’s his heart that warms Arik’s interest and gets him to look past the exterior to let down his guard.

But Arik soon realizes that certain members of Reg’s motorcycle club are into things he can’t have any part of. Reg can’t understand why Arik disappears until he learns Arik’s injury was the result of his father’s drug activity. Though neither Reg nor Arik wants anything to do with drugs, the new leadership of Reg’s club might have other ideas.

At the edge of Pleasanton, his nerves began to get the better of him. He pulled into a gas station and up to the pumps, then turned off the engine. He needed gas and a chance to think. He should have stayed home and not put himself through all this.

A tap on the doorframe pulled him out of his thoughts. Arik turned and squeaked at the huge man half leaning into his window. “You want some gas or what?” the man asked gruffly. Arik was belted in or he’d have scooted into the passenger seat to get away.

“Yeah,” he answered shakily. Arik watched as the huge, bald-headed man, dressed in jeans and a plaid shirt with a leather jacket hanging open over the top, stared back at him with eyes that said he wanted to tear Arik apart. At least that was what Arik saw in them. He shivered and tried not to look scared. “Th… thank you?” God, he hoped this guy worked at the station.

The guy didn’t move—he just watched Arik for a few seconds as Arik chilled and willed his legs not to shake while hoping the guy wasn’t about to reach in and grab him.

The huge man pulled back, and Arik breathed a sigh of relief.

“You need to open your gas cover,” the man said, and Arik pulled the gas-cap lever, fingers shaking. He reached over and raised the passenger window. He also raised his partway and felt a little safer. Arik adjusted his rearview mirror, watching the man and wishing like hell he could get out of here. He reminded himself that the two of them had never met before, and the guy pumping his gas had no reason to hate him. That still didn’t stop Arik’s insides from churning. When he heard the sound of the gas nozzle being removed, he pulled out his wallet, checked the pump for the amount, and got out some bills.

Arik handed him thirty dollars. “Thank you,” he said hastily, and then he raised the window and started the engine. The man might have said something, but Arik pulled away and turned back onto the main road, following the directions his GPS system gave him.

It took a good ten minutes for his breathing to return to normal. He hated that the gas station guy had intimidated him, but he hadn’t been able to help his reaction.

Love Comes to Light is available from:

Andrew’s hobbies include collecting antiques, gardening, and leaving his dirty dishes anywhere but in the sink (particularly when writing)  He considers himself blessed with an accepting family, fantastic friends, and the world’s most supportive and loving partner. Andrew currently lives in beautiful, historic Carlisle, Pennsylvania.