Hi, I'm Lauren Sattersby, and this is the blog tour for my very first novel, Rock N Soul!

I'll be featured on various blogs over the course of the tour, and I'll be sharing deleted scenes, playlists, answers to questions, and some of my thoughts on what it's like to write a ghost story and make it both hot and romantic. Comment on each spot to be entered in a drawing for a $25 gift card to buy some books from Riptide Publishing!

In Rock N Soul, Chris Raiden is the recently-deceased bassist of the band Incite the Masses, a rock/metal band that’s world-famous. Tyler is a big fan of the band (“No, I’m really not that big of a fan,” he would say) and a couple of times, he mentions ITM’s first album, which had a fire theme. There are also two songs mentioned in the book, which were called “Strike a Match” and “Houses on Fire” that were both part of the fire-themed album. I got a little enthusiastic about what the album would be like if it was real, so one day while procrastinating, I sat down and made cover art for this fictional album. There was obviously no place to put it in the novel itself, but I present it to you here. You can consider this part of the Director’s Cut of Rock N Soul! 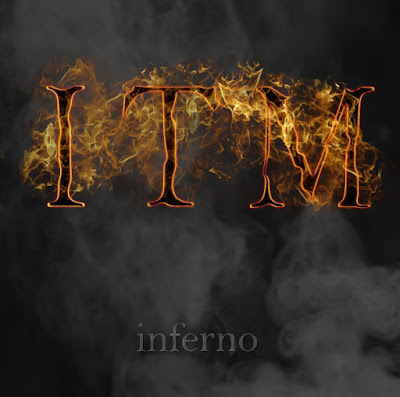 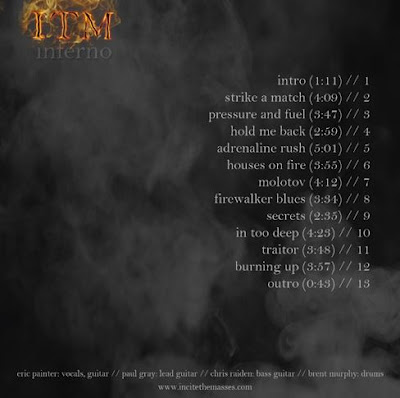 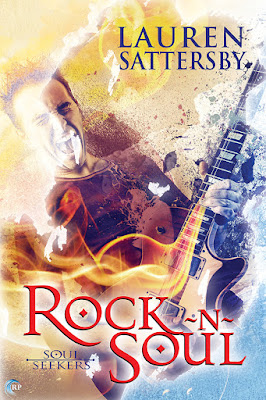 I’m Tyler Lindsey, and until recently, I had an okay apartment, an okay girlfriend, and an okay job as a bellboy at a respectable Boston hotel. Then rock star Chris Raiden died right before I brought his room service—stiffing me on the tip, by the way—and my life went to hell. My fifteen minutes of fame was more like five seconds, and my girlfriend left me in disgust.

But even worse—Chris is haunting me. Not the room where he died, like a normal ghost. No, somehow he’s stuck to me and is insisting on taking care of a bunch of unfinished business in California. So now I have to traipse across the country with the world’s most narcissistic ghost.

But . . . I keep having these weird thoughts. Thoughts about how much I like the way he makes me laugh. Thoughts where I kind of want to kiss the emo-narcissist, even though he’s a ghost and an asshole and I can’t touch him anyway. And even if I could, what will happen when he finishes his business and nothing’s keeping him here anymore?

Lauren Sattersby works as a budget manager by day, but while she’s at her desk mindlessly crunching numbers, it’s a good bet that she’s also writing M/M romance in her head and counting the minutes until she can get home and write it all down. She is a grammar enthusiast, which is why she has a Master’s degree in technical writing, but that tends to scare friends away so she keeps that to herself.

Lauren lives in Wisconsin with her partner and their three terrible cats. She’s a recent transplant from a thousand miles further south, so she still gets crazy excited about snow. When she isn’t writing, she can usually be found playing video games or scouring the countryside looking for interesting birds.

To celebrate the release of Rock N Soul, Lauren is giving away $25 in Riptide credit! Your first comment at each stop on this tour enters you in the drawing. Entries close at midnight, Eastern time, on January 23, 2016. Contest is NOT restricted to U.S. Entries. Follow the tour for more opportunities to enter the giveaway! Don’t forget to leave your email or method of contact so Riptide can reach you if you win!