Hi! I’m J.A. Rock, and right now I’m touring the internet talking about my latest release The Subs Club—Book 1 in The Subs Club series. Thanks so much to the blogs that are hosting me on this tour, and be sure to leave comments on the tour posts for a chance to win your choice of two backlist ebooks and a $10 Amazon gift card! 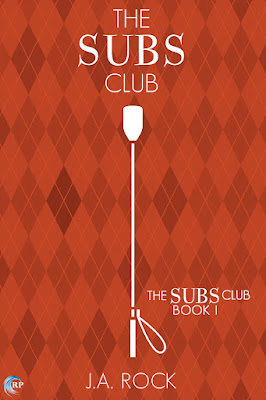 A year ago, my best friend Hal died at the hands of an incompetent “dom.” So I started the Subs Club, a private blog where submissives can review doms and call out the douche bags.

A perfect example of the kind of arrogant asshole I mean? The Disciplinarian. He has a pornstache. He loves meat, stoicism, America, and real discipline. And he thinks subs exist to serve him.

But . . . not everything about him is awful. His Davy Crockett act just seems like a cover for his fear of intimacy, and part of me wants to show him it’s okay to get close to people. And, I mean, sue me, but I have fantasized about real discipline. Not role-play, but like, Dave, you’re gonna be thirty in four years and you still work in a mall; get your ass in gear or I’ll spank it.

Not that I’d ever trust anyone with that kind of control.

I’m gonna redefine “battle of wills” for the Disciplinarian. Or I’m gonna bone him. It’s hard to say.

About The Subs Club Universe

After the death of their friend Hal at the hands of an irresponsible dom, submissive friends Dave, Kamen, Miles, and Gould band together to form the Subs Club—an organization seeking to expose dangerous local doms. The club slowly evolves as romances blossom, loyalties are tested, and tensions mount in a community already struggling for unity in the wake of Hal’s death.

From domestic discipline to knife play to fashion paraphilia, and from family drama to new jobs to first loves, the members of the Subs Club explore life’s kinks inside and outside of the bedroom as they attempt to let go of the past and move forward.

The Subs Club is available from Riptide Publishing.

J.A. Rock is the author of queer romance and suspense novels, including By His Rules, Take the Long Way Home, and, with Lisa Henry, The Good Boy and When All the World Sleeps. She holds an MFA in creative writing from the University of Alabama and a BA in theater from Case Western Reserve University. J.A. also writes queer fiction and essays under the name Jill Smith. Raised in Ohio and West Virginia, she now lives in Chicago with her dog, Professor Anne Studebaker.

To celebrate the release of The Subs Club, J.A. Rock is giving away two titles from her backlist and a $10 Amazon gift card! Your first comment at each stop on this tour enters you in the drawing. Entries close at midnight, Eastern time, on December 12, 2015. Contest is NOT restricted to U.S. Entries. Follow the tour for more opportunities to enter the giveaway! Don’t forget to leave your email or method of contact so Riptide can reach you if you win!