Like it or not, the world doesn’t have one language and not all languages are spoken, or even heard. In the case of ASL, it is a language, it’s just not one that’s spoken/heard. Well, you can speak it, but it would be very strange to Engish speakers (or any other spoken language) as its sentence structure isn’t the same as English nor does it use all the words one would think would be used. Interpreters don’t just have to see the ASL and switch the signs to spoken English, no, it’s far more complicated that that. That would only be if one were signing in ‘Signed English’ which is very tiring to use, by the way.

When I created Adrian, I knew he wouldn’t just be around for Desires’ Guardian, but wasn’t worried about how much research I’d have to do to write a full novel with a Deaf character as I did in Signs of Desire. You see, Deaf Studies was my minor is college and I joined my first Deaf and Hearing Alliance group in high school (something I want to get back into, btw). I’ve wanted to write a Deaf character for a long time, actually, but then Adrian came along and gave me my outlet!

It wasn’t the research so much as deciding how to write out the signed but not spoken parts. When signed, sentences are very different than how Hearing people speak or write. Instead of “Would you like to go to the store with me today?” you would be asked something like “go store,” “go store now/today/later,” etc. It would depend on the asker, the situation, the familiarity, and the context of what else was going on.

Translating isn’t always a very direct thing to do between languages, ASL is no different. But we need flow and readability, right? So what’s an author to do?

A hand fluttered in his vision for a moment. When he looked up, a tall, thin woman signed, “Hi. My name is Anna.”

Name… right. Um… “Hi, my name is Simon,” he signed and mumbled, spelling out his name slowly. He concentrated and thought he got it all right.

Her long, thin face lit up. “Simon’s a good name. Are you new to ASL?”

“Yes.” He thought about it for a moment but couldn’t remember the right signs.

“I don’t know much yet,” he said, hoping she could read lips.

“Oh, you’re brand-new, then.” She spoke that time but still signed as well. It was worded as a question, but the tone was all statement. Thankfully she didn’t seem upset or annoyed with him.

“Yes. I start classes next week and have been using ASLPro and HandSpeak.com, plus Adrian signs when he talks to help me learn.” He signed what words he knew, spelling out the sites.

“You’ll get there. Don’t worry. Is this Adrian?” she asked, motioning to Adrian as he stepped up beside Simon again.

Simon leaned into Adrian’s side a moment and smiled. “Yes. Adrian, this is Anna.” This time he signed the whole thing, knowing he had it all right by how Adrian’s face radiated approval.

“Hi, Anna. Thanks for helping Simon.” Adrian touched his cheek, a delighted expression on his beatific face. “And Si, Anna will probably be one of your teachers. She teaches ASL at the community college and at the continuing education center.”

“Oh!” Great, he’d already failed in front of a teacher. He’d never done anything but exceptionally well in school, whether as a child or once in university.

“Calm down,” Anna said and signed. “It’s good to see you trying. No one here is going to be upset if you have to spell most of the words or ask them to slow down and repeat, either. Everyone understands that most of the Hearing here are learners.” She scowled at Adrian. “You, however, should have taught him such things as slow down, again, don’t understand. It’s not fair to him if he’s not been taught yet.”

“I…. You’re right. He tries when we’re alone. I didn’t think about it overwhelming him.” Adrian turned to face Simon more. “I am so sorry, Si. I wanted you to see my world, not make you feel bad. We can go if you’d rather.”

Shaking his head before Adrian was through, he said and signed, “No. I want to learn. I want to see. I just wasn’t prepared as well as I thought.” He was pretty proud of himself. He’d made it to the last sentence before he lost the ability to sign anymore.

Anna laughed. “You’ll do fine.” She patted his shoulder. “I look forward to having you in class, Simon. We’ll have you signing in no time.” With that, she said her good-byes and wandered off to start signing with others.

“I really am sorry, Si. I wanted you to see what it’s really like, to be certain you could handle being with someone Deaf. I didn’t mean to—”

Simon held up a hand, pressing the tips of two fingers over Adrian’s lips and clutching Adrian’s hand with the other. When Adrian went still, Simon released him. “I don’t want an apology, Adrian. I understand the logic, though I wish I was better at all this. But I don’t mind learning, I promise. I want to learn for you but also for us and for myself.”

“You sure?” Adrian finally asked, hands flying as he spoke. “We can go as soon as you want.”

“No, I’m going to go get a drink and maybe see if I can’t find someone else to have pity on me and let me practice what little I know.”

For more information on ASL, here are a couple of interesting dictionary sites (mentioned in the book, btw):
http://aslpro.com
http://handspeak.com 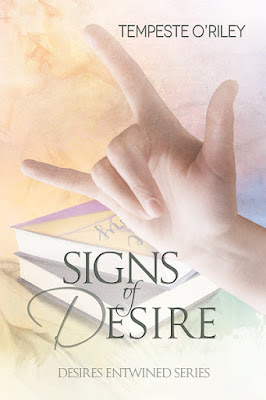 Simon Tyler knows his job as a gay romance author makes his lack of faith in love more than a little ironic, but he’s tired of being used for his wallet. When a night out turns into a matchmaking scheme orchestrated by his best friends, Simon’s not thrilled, but since he’s not the target and he’s sworn off happily-ever-after anyway, he goes along with it… until he meets Adrian, the object of their efforts, and finds perhaps he hasn’t given up on love after all.

Professor Adrian Keys has tried to date Hearing men before, but being Deaf himself, he’s never had any success at making a connection. After his friends con him into going out and Adrian realizes it’s all an elaborate plan to set him up, he braces for yet another failure, only to discover there is a spark—except it’s not with the man his friends had in mind, but with Simon Tyler instead.

Not all their friends have found a way past their romantic failures, but Simon and Adrian might be on the path to happily-ever-after.

Be sure to check our Signs of Desire, by Tempeste O'Riley, available now from Dreamspinner Press.

Tempeste O’Riley is an out and proud pansexual genderfluid whose best friend growing up had the courage to do what they couldn’t—defy the hate and come out. He has been their hero ever since.

Tempe is a hopeless romantic who loves strong relationships and happily-ever-afters. Though new to writing M/M, they has done many things in their life, yet writing has always drawn them back—no matter what else life has thrown their way. They counts her friends, family, and Muse as their greatest blessings in life. They lives in Wisconsin with their children, reading, writing, and enjoying life.

Tempe is also a proud PAN member of Romance Writers of America®, WisRWA, and Rainbow Romance Writers. Tempe’s preferred pronouns are they/them/their/theirs/themselves. To learn more about Tempeste and their writing, visit http://tempesteoriley.com.