Last time I visited, I talked about dreams and how they don’t always work out the way we plan. My holiday release, Cascades, sure fits that description! My wonderful Dreamspinner Editor encouraged me to write something for last year’s Advent Calendar. That anthology was full of lovely winter holiday stories from around the world. I enjoy most challenges so I tried to write a story that would fit. Cascades didn’t fit so I expanded it a little and am thrilled to have my first standalone Christmas novella published this year!

My characters tend to be working people, the kind of folks who don’t usually spend their summer vacations in Europe or Spring Break in the Caribbean. It wasn’t easy to find a way to get my “regular guys” out of the country so I sent the main character, JB, on one of my favorite trips—Portland to Vancouver, BC on Amtrak’s Cascades line. It’s a beautiful trip through some amazing country, and within the means of a small town bartender (especially one with low overhead who’s fine with staying in a hostel). I’ve taken that trip a couple of times, but only in the warm months. It’s not hard to imagine how gorgeous the route would look with a dusting of snow on the scenery. Probably something like the amazing cover Bree Archer created for this novella.

Like my previous holiday story, “Toy Run”, Cascades isn’t the most traditional holiday romance. If it had a warning it would probably include JB’s aversion to the holidays, references to opposite-sex relations, and a love interest who’s been living on the streets and doing things to survive the most of us haven’t and wouldn’t want to do. Oh, and both of these guys are pushing 50.

JB may break with tradition but I don’t want to, so here’s a question to answer in the comments for a chance to win a $5 Amazon gift card. I’m super busy with deadlines and the day job, so it’ll be an easy one. 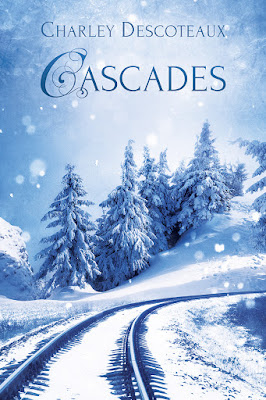 Justice “JB” Bishop tells himself he’s satisfied with life in the small town of Upright, Oregon. He was born and raised there, and has settled into a comfortable, if lonely, routine working at his uncle's bar. JB doesn’t expect anything to change after he turns fifty, until an old friend drops in. She suggests he get out of town for the holidays, and soon JB finds himself on an Amtrak to Canada. JB expected to feel different in Canada, to see things he couldn’t see at home. He never expected to find the one who got away.

Follow the buy link below to read Chapter One on the Dreamspinner Press website. Here’s an exclusive excerpt from the beginning of Chapter Two:

I couldn’t keep the shock—and yeah, revulsion—off my face. It was a shitty thing to do, letting Doug know how I really felt at seeing him like that. The last time I’d seen him, in my bedroom in Upright, he’d been gorgeous, his clear blue eyes sparkled, and his sculpted body beckoned me senseless. The man taking refuge under the awning had been battered and abused by life. Even under his smile and obvious relief at seeing a face that should’ve been friendly, the empty space where hope should’ve lived was easy to spot.

He closed his eyes and slid farther down the wall, limp. Fear gripped my heart and my gut at once. I shook him gently, but he didn’t respond, so I hauled him up off the sidewalk and took him inside.

“Can’t.” I barely heard him, but at least he was talking. “They’ll kick you out.”

“Let me worry about that.” I got the stink eye from a kid behind the desk, but he didn’t make a move to stop me. I’d used my key card to get in; he could try to kick me out if he dared.

I practically carried Doug up to the third floor, and didn’t stop until we were in the bathroom. He didn’t look like he could keep his feet on his own, so I sat him in the corner near the showers and ran back to my room for a towel and a change of clothes, dropping my coat. He fell asleep while I was gone and woke with a start and a weak attempt to fend off a nonexistent attack.

Once I managed to convince him I hadn’t brought him there to kick his ass, Doug let me strip him down and shove him into a shower. Far too thin, sporting more than a few new scars and tattoos, he was still handsome underneath it all. Still Doug.

Cascades won’t be released until Dec. 9 so I wanted to link to one of my free reads, because everyone likes a little instant gratification. If you haven’t read “Comfort” it’s free on All Romance and Smashwords. You can find the links on my blog here.