Like many New Yorkers, I've spent most of my summers visiting the Jersey Shore. For me, that's been the stretch of beach that includes Ocean Grove and Asbury Park.


Both towns, which together encompass little more than two miles of beachfront, are peculiar relics of another age. Asbury was one an amusement park town; today, while the mini golf and pinball hall of fame remain, the rides are all gone. Ocean Grove, on the other hand, started and continues life as a Methodist Camp Meeting town.

Today both towns are also popular destinations for LGBTQ travelers and have significant LGBTQ populations. Sometimes, this makes things awkward, like that time someone hissed something about lesbian witches at my partner and I as we walked down the boardwalk. Mostly,though, no one cares.

We set the opening of Twelfth Night in Ocean Grove and Asbury because we wanted to capture our hero John, who is still in the process of coming out to himself and others, adjusting to being someplace that was strongly queer and would recognize him as one of their own. But we also wanted to capture the sense he has of embodying a lot of internal conflicts, much like these towns.

Both towns are easily accessible by public transit and are just a few hours from New York City, and our worth your visit in you're in the area. Regrettably, the nightclub with the "Less Lights, More Fun" marquee mentioned in Twelfth Night is no more. 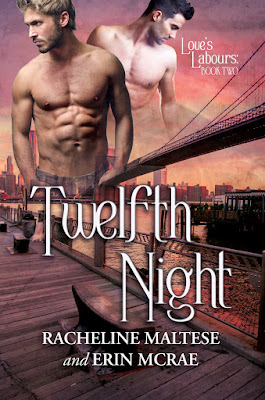 
Michael and John, a May/December couple, navigated the repercussions of their gay-for-you love affair in the hothouse of a summerstock theater production.

Back in New York City at the conclusion of their show’s run, John is overwhelmed by his obsession with Michael and the difficulties of learning to date again after the death of his young son and his recent divorce. John gradually comes out to his colleagues, his football rec league friends, and even his ex-wife.

But when he invites his parents over for Christmas to meet the person he’s been seeing, the holiday—featuring Michael’s family’s amateur production of Twelfth Night—quickly turns into a French farce of potentially catastrophic proportions, forcing John finally to take the lead in claiming his evolving identity as he takes the next step in his relationship with Michael.

John doesn’t expect Michael to be as weirdly taken with the ocean as he is with the wild woods. It doesn’t seem like his element the way the trees are. But he is mesmerized by the beach almost instantly upon their arrival, insisting they walk along the hard wet sand of the tide line. It doesn’t matter how many times John says their muscles will ache unhappily tomorrow from miles walked at the edge of the frigid fall water; Michael either doesn’t hear him or doesn’t care enough to respond.

John is fascinated as Michael keeps a close eye on shells and rocks. One is shaped like a small egg, and he’s disappointed when it’s not. Still he makes John hold it for him, running ahead to a rock jetty to comb through the midden of mussel shells left by persistent and angry seagulls.

John tries not to be horrified, but the sight of Michael’s fingers picking through the dead bivalves and seaweed stinking in the sun is a bit much.

“What’s this?” Michael asks, eventually, holding out a shell, colored and swirled, to him.
It’s in perfect condition, and John is about to be impressed with the find until he realizes there’s still a creature using the shell as its home.

“That’s an animal in there.” He doesn’t actually know what kind. But it’s gelatinous and of the sea and not really a thing they should be messing with. They’ve seen dozens of jellyfish washed up on the beach already today.

“Ocean,” John says. He’s not 100 percent sure, but he suspects, like the jellyfish, the sun and the birds will eventually cook and peck it to nothing if it’s not saved by the sea.
Michael throws the shell back and returns to the tide line as they walk, gaze carefully on the ground and picking at every shell he sees that looks like whatever creature he just rescued. Most of them have their animals in them, and John suspects the coming hurricane that’s going to ruin their trip is churning them up.

As Michael throws each one back into the water, John is charmed that he’s trying to save creatures that have no spine, names he doesn’t know, and forms he’s never seen before.
Eventually Michael decides they can leave and reaches for John’s hand. John flinches away. It’s not the strangeness of the town this beach is attached to, half religious meeting town, half gay beach paradise. There’s even a club down the block from their inn that advertises “Less Lights, More Fun!” It’s that he can only think about whatever bacteria Michael is now coated in from all the dead mussels.

God, but he’s going to look like an idiot explaining that.

When he tries, stumbling through a mini monologue about seaweed and sea creatures and sand, Michael just listens with his head tipped to the side.

“Okay. I swear the handholding thing has nothing to do with anything except your gross dead bivalve hands. But I think I may be freaking out.”

Michael blinks at him. “Did this start when we checked in and you had to deal with people who know we’re here to fuck?”

It’s sharp, but John knows he probably deserves it.

“You know I don’t mind being out in public with you,” he says cautiously. He wants to be honest with Michael, but he also doesn’t want to provoke anger by being less willing to be out than Michael deems sufficient.

Thankfully Michael considers John for a moment and then grins. “Somewhere in the romantic beach getaway, I got that.”

John lets out a relieved sigh and wraps an arm around Michael’s waist. He wants to prove his willingness to be fully in this relationship without shame, but life is also just better when they’re touching. Michael leans into his side, and they start walking down the sand again.

“But it’s something I can’t help being aware of,” John says quietly as they walk. “What we are and what people see when they look at me. Which apparently means I’ve found my internalized homophobia, and I am completely aware of how gross that is. I’m going to work on that, but there it is.”

“You still want to, like, go out to dinner tonight and make out on the boardwalk, though, right?”

“Oh my God, you have no idea. I want to tell everybody about you.”

Michael smirks. “So why don’t you?”

“Coming out at my age is kind of more complicated than it is at twelve. Or however old you were when you did.”

“I was fourteen, thank you.”

“So how did you come out to your parents?” John asks after they walk for a few minutes in silence.

Michael buries his face in John’s arm and apparently can’t stop laughing. “You do understand how ridiculous this is, right?”

“I understand that I’m forty-two and have to come out to everyone in my entire life that I give a remote shit about, because you are addictive and fascinating and wonderful and also are sadly holding me to some pretty legitimate ethical standards. So help a guy out, okay?”

“I was making out with my first high school boyfriend in the living room, and my mom walked in.”

John is entirely not surprised. “So hey, when you meet my family, let’s not go with that plan, yeah?”

“Yeah,” Michael says, drawing the word out in a way that makes it clear it’s his turn to be defensive and weird.

John smirks, pleased to be off the hook for the moment. “You haven’t told them about us either,” he says smugly.

Michael mumbles something against John’s arm.

Twelfth Night is available from

Erin McRae is a queer writer and blogger based in Washington, D.C. She has a master’s degree in International Affairs from American University, and delights in applying her knowledge of international relations theory to her fiction and screen-based projects, because conflict drives narrative.
Racheline Maltese lives a big life from a small space. She flies planes, sails boats, and rides horses, but as a native New Yorker, has no idea how to drive a car. A long-time entertainment and media industry professional, she lives in Brooklyn with her partner and their two cats.
Together, they are co-authors of the gay romance series Love in Los Angeles, set in the film and television industry -- Starling (September 10, 2014), Doves (January 21, 2015), and Phoenix (June 10, 2015) -- from Torquere Press. Their gay romance novella series Love’s Labours, set in the theater world -- Midsummer (May 2015), and Twelfth Night (Fall 2015), is from Dreamspinner Press. They also have a story in Best Gay Romance 2015 from Cleis Press and edited by Felice Picano. You can find them on the web at http://www.Avian30.com.