Hi, and welcome to the Dead Ringer release tour! We’re Heidi Belleau and Sam Schooler. Thanks to our generous blog hosts, and thanks to you for hanging out with us! Be sure to check out our full list of tour stops so you can see the rest of our extras and snag yourself more chances to win our giveaway! 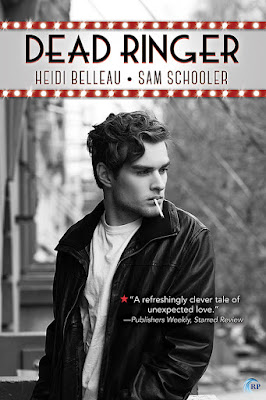 Brandon Ringer has a dead man’s face. His grandfather, silver-screen heartthrob James Ringer, died tragically at twenty-one, and Brandon looks exactly like him. But that’s where the resemblance ends. Brandon is unknown, unemployed, and up to his ears in bills after inheriting his grandparents’ Hollywood mansion. He refuses to sell it—it’s his last connection to his grandmother—so to raise the cash he needs, he joins a celebrity look-alike escort agency.

Percy Charles is chronically ill, isolated, and lonely. His only company is his meddlesome caregiver and his collection of James Ringer memorabilia. When he finds “Jim Ringer” on Hollywood Doubles’ website, he books an appointment, hoping to meet someone who shares his passion for his idol.

Brandon? Not that person.

But despite their differences, they connect, and Percy’s fanboy love for James shows Brandon a side of his grandfather he never knew. Soon they want time together off the clock, but Percy is losing his battle for independence, and Brandon feels trapped in James’s long shadow. Their struggle to love each other is the stuff of classic Hollywood. Too bad Brandon knows how those stories end.

Heidi Belleau was born and raised in small town New Brunswick, Canada. She now lives in the rugged oil-patch frontier of Northern BC with her husband, an Irish ex-pat whose long work hours in the trades leave her plenty of quiet time to write.

She has a degree in history from Simon Fraser University with a concentration in British and Irish studies; much of her work centred on popular culture, oral folklore, and sexuality, but she was known to perplex her professors with unironic papers on the historical roots of modern romance novel tropes. (Ask her about Highlanders!)

When not writing, you might catch her trying to explain British television to her newborn daughter or standing in line at the local coffee shop, waiting on her caramel macchiato.

Sam Schooler is queer and nonbinary, and she grew up surrounded by corn, churches, and cliché “Hell Is Real” signs. After twelve years of Catholic school in southwestern Ohio, she applied to the most liberal university she could find and wound up with a degree in journalism. Now, she writes trope-subverting new adult books about people of all genders and orientations—and all the ways they can love each other. Sam lives with her wife and their two cats in Regina, Saskatchewan.

You can find her backlist and details about upcoming projects at samschooler.com.

If you’re feeling daring, follow her on Twitter as @samschoolering or on Tumblr as meetcute-s to get the full immersive experience.

Feeling lucky? Leave a comment with your email on this or any of our other DEAD RINGER tour posts for a chance to win one of our two grand prizes. Each winner will receive a $15 gift card to Riptide Publishing, plus get their choice of either a poster-sized print of DEAD RINGER’s gorgeous cover photo by Marisha Dudek, or a postcard set featuring the eye-catching ephemera of James Ringer’s filmography, designed by Vivian Ng. Contest is not restricted to US entries.