For some reason trilogies seem to work well in both the written and the cinematic world. There’s a nice arc of beginning, middle and end that allows the author or filmmaker to explore the highs and the lows. For some reason, the middle part, in this case the Retribution story in the Tribute Series, is often the darkest or the one where you think the story is going to end badly—think Han Solo stuck in that block of black stuff.

It’s also hard to jump into a series of three connected books in the middle, which might give a reader the impression that the series is not quite ‘complete’. So if you are interested in reading the Tribute books, I’d suggest you start with Sacrifice and read onward through Retribution and Triumph. All three books are closely connected and form one complete big book at the end. You can also get the whole thing in one volume, which is super cool.

I’ve never written a series quite like this one before either in tone—(non con, dub con, violence you name it). There are elements of all those things in my other books, but this one pushes the boundaries even further. I suppose it comes down to the fact that I’ve never liked anyone telling me what I can do, and what I can write. The more someone says ‘that isn’t romantic, or nice girls don’t fantasize about rough sex or non con or tentacled aliens’, the more I seem to want to write it.

It’s taken women a long time to get to a place where we can consider ourselves to be sexual beings and I’m really not into shaming anyone for what they want to fantasize about—unless its something to do with cats—I draw the line at cats. :)

So the question is-do you like reading trilogies? How do you feel if an author changes course and adds in books to that original idea? 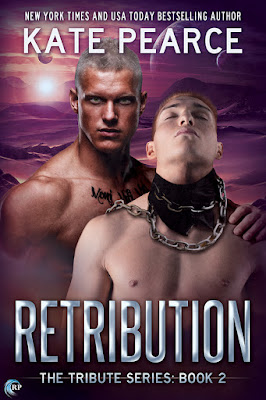 Cheated out of his exit from the Tribute program, Kai Mexr is forced to return as a trainer for one more year. His trainee, Aled Price, is an idealistic Mitan patriot who Kai struggles not to loathe on sight, and who seems up for any challenge Kai sets him. As Aled learns to give up control and endure the program’s worst, Kai is drawn into an intense sexual game that leaves him wanting more.

But then Aled must fulfill his duty as Tribute. He must endure the Ungrich—or die.

When Aled returns, it takes Kai’s ruthless presence to pull his trainee back from the brink of madness. Surviving the Ungrich makes Aled doubt his blind allegiance to his planet—and to everything else he’d never thought to question. But with Kai at his side, Aled finds a new cause to believe in. And with the help of master trainer Akran and his partner Anna Lee, Aled and Kai forge unbreakable allegiances of blood, sex, and love that could save the entire planet from the Ungrich for good.

Retribution is available from Riptide Publishing.

New York Times and USA Today bestselling author Kate Pearce was born into a large family of girls in England, and spent much of her childhood living very happily in a dream world. Despite being told that she really needed to “get with the program,” she graduated from the University College of Wales with an honors degree in history. A move to the USA finally allowed her to fulfill her dreams and sit down and write her first romance novel. Along with being a voracious reader, Kate loves walking on the beach and climbing live volcanoes in her new home in Hawaii.

Kate is a member of RWA and is published by Kensington Aphrodisia, Cleis Press, Carina Press, and Virgin Black Lace/Cheek.

Every comment on this blog tour enters you in a drawing for a $50 Amazon gift card! Entries close at midnight, Eastern time, on October 10. Contest is NOT restricted to U.S. entries. Don't forget to leave your email or a way to contact you if you win!