How Much Is Too Much?

What brings us to this chasm of rated-R romance and the backroom of a sleazy adult video store?

So, how much is just enough? I believe if a reader can close a book having felt something of the character’s heart, then there was enough lust to induce love.

Granted sometimes one character needs to say no to sex. Even in the face of another character’s incredible flexibility.

“You know something that would help me sleep? Sex. Yes, that always works.”

The warm brush of Aaron’s lips on the side of his neck nearly had him dropping Aaron as a shaft of desire tore into him. Wren couldn’t control the shudder that resulted.

“No,” Wren rasped, then cleared his throat. “No,” he said more firmly, setting Aaron on the bed.

Aaron propped himself on his elbows, giving Wren a lazy grin. “Aww…come on. I’m very flexible.” He waggled his eyebrows.

Above is an excerpt from Lost in the Fire (Firehouse Six, book Five), where sex, love and complications are all equally meshed together. 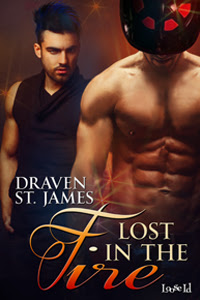 Lost in the Fire

Aaron Evans embodies every complication Wren Tucker knows he doesn’t need. The tempting go-go dancer refuses to leave him alone and his attempts to get into Wren’s bunker pants don’t stop at the club--even the walls of the Firehouse aren’t safe. Wren’s control is only so strong, and his desire for Aaron is turning into a clawing need that’s digging through the many reasons keeping Aaron at bay.

Aaron is two cold showers away from hypothermia if the hot fireman of his dreams won’t give in to the lust he sees blazing in Wren’s eyes. The only issue is, Wren is a forever man, and Aaron doesn’t have that in him to give, not with so many secrets locked behind the glitter and gold of his beautiful world.

As Wren begins to cave to Aaron’s delicious demands, he gets a deeper view of the tarnished landscape Aaron exists in. A murky pit of drug addiction that’s slowly dragging Aaron under, and Wren is going to have to fight like hell to save Aaron from it, to even have a chance at a new beginning with the man who brought him out of the shadows.

Lost in the Fire is available from Loose Id.
Also from ARe and Amazon