This Tuesday Favorite Things list is all about the sexy older actors who make my libido do cartwheels. Why sexy older men? Immediate answer is why not? But the actual answer is because Mr. Malena, one of the stars of VIP Room Service (Other Related Duties #1)—now on sale for 99¢ (regularly $2.99) until 26 Sep—is an older gentleman. I don’t say how old but I do hint at him being up there in years. But not so much up there that he can’t keep pace with a sex-hungry 30-something.

So here’s my list, in no particular order, of the older men who will get me to the movie theater no matter what they are starring in…well almost. Some movies can’t be redeemed no matter who is acting in them.

Of course, I have to start with Sir Sean Connery. Of course, right? If you don’t start a list like this with Sean Connery, there’s something wrong with you. The man is HOT. 85 years old (25 August 1930), 6’2” and the star of every granddaddy fantasy I’ve ever had. Yowza.

Next up is Johnny Depp. 52 (09 June 1963) and 5’10” the versatility of this man means you would never, ever be bored in bed and out. As Captain Jack Sparrow (Pirates of the Caribbean), he would be a wacky spontaneous lover, who would keep you guessing and on the edge of orgasm. As Mort Rainey (Secret Window), his tortured soul would cry out to you to cuddle him right before throwing him on the bed and having your wicked way with him so he has something to write about.

Born 19 March 1955, Bruce Willis is 60 years old and 6’0” of bald hotness. Seeing him in Red (1 & 2) and A Good Day to Die Hard rekindled a low burning torch I’ve had for him ever since I saw that one scene in Color of Night. Anyone who has seen that movie (and it’s hard to find now) knows what scene I’m talking about. (wink wink)

James Spader. That’s it. That’s all I’m going to say. Okay, I take that back. That’s not all I’m going to say. The star of Blacklist, who first came to my attention in the theatrical release of Stargate, thus prompting me to watch every movie he’s ever made (every movie I could find), including The Secretary. He was Grey long before E.L. James came on the scene…no seriously, his character was named Mr. Grey in a movie that came out in 2002 about a BDSM relationship between a man and his secretary. Good movie. You should see it…if you can find it. 5’10” and 55 years old (07 February 1960). I would do this man for his voice alone. Did you see Avengers: Age of Ultron? Me melting into a puddle every time he spoke.

Jeff “friggin” Goldbum is 62 (22 October 1952), 6’4” and has a swagger no man can match. Just watch that one scene in Independence Day after he and Will Smith return from blowing up the mothership (spoilers but it’s been almost twenty years, if you haven’t seen it yet, you’re SOL). Those hips swaying. Have mercy. I wanted to jump on him the same way Margaret Colin did. This Earth girl is definitely easy so far as he’s concerned.

And just to toss in some color to the proceedings, I give you my final pick, Mr. Samuel L. Jackson, Nick Fury himself (see everything Marvel has put out in the last few years). In the words of Ted from Ted 2, “You ever seen any movie ever? He’s the black guy.” Which isn’t actually true, but I still like that line. 6’2” and 66 years old, he was born on 21 December 1948 (almost a Capricorn…missed it by that much. And yes, I’m a Capricorn). It’s his versatility and his looks that I love, especially when he’s wearing that eye patch.

And those are my first string picks of the older actors that make my libido stand up and say, “Hallelujah! Yes Lord!” I might have been imagining some or all of them when I wrote Mr. Malena. You’ll have to read him and see. 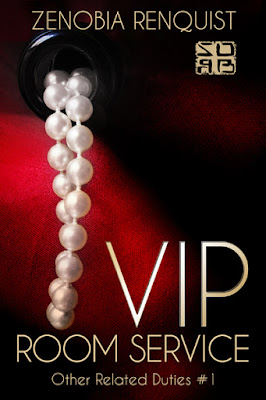 A hotel erotica tale hot enough to set the screen on fire.

She offers satisfaction above and beyond what is requested.

Lexie's job as a maid at a five-star hotel doesn't normally include the unique and risqué form of room service that rich guest Mr. Malena has requested, nor the generous tip he's offered. Submission and exhibition and a ménage. Lexie can't resist. What should have been a one-time thing turns into an introduction into the sensual world of customer satisfaction. This is one workplace encounter that could get her fired...or will it?

Lexie backed up a step.
“Now, now. Don’t be frightened. Nothing untoward. I promise.”
She snorted. “What exactly is your definition of untoward? I just rode a bottle for your wanking pleasure.”
“That’s all part of wine service. As is what comes next.”
“Next?”
“I didn’t bring it up last night because of how skittish you were, but there is more to it than stuffing that beautiful pussy of yours with a five-hundred-dollar bottle of Chardonnay.”
“Five hun—” She choked on the word. She’d been riding a bottle of Chardonnay that cost five hundred dollars. True, she knew nothing about wines or why one cost more than another—beyond age—but hadn’t known a single bottle could cost five hundred dollars.
“Yes. In honor of you and your first night. I thought it appropriate a five-hundred-dollar woman should ride a five-hundred-dollar bottle.” He wiggled his eyebrows. “Does it get you hot to think about it?”
“You’re insane.” She laughed. “You’re also joking.”
“I’m not. Call Franceska if you don’t believe me.” He gestured to the phone.
She looked at the bottle and then at him. “Five hundred dollars?”
“Yes.”
“Wow.” She’d never had anything that pricey between her legs. Her most expensive toy had barely broken the two hundred mark, and here she’d used a five-hundred-dollar bottle of Chardonnay to get off. “So what else is there? Sex, right?”
“If you want, but not what I had in mind right this instance.” He chuckled. “I’m not as spry as I used to be. I need a little more time to regain my stamina.”
“You look plenty spry to me.” She eyed his semi-erect dick. It hadn’t gone limp after he came. A few well-placed licks would probably have it hard again in an instant.
“Bless you, dear girl. You are good for my ego.” He lifted her hand to his lips and kissed the back. “Now then. After riding the bottle comes drinking the wine.”
“I’m on the clock.”
“Not you. Me. And a little shouldn’t hurt your performance.” He gazed into her eyes. “Unless you’re a lightweight.”
“No, but I don’t want someone to smell alcohol on my breath either.”
“True. True. But you won’t be drinking.”
“So why do you need me?”
He kissed her hand again and ran his tongue up to her wrist. “You’re my glass.”

Zenobia Renquist is the alter-ego of D. Renee Bagby. Call her Zen or Renee, she answers to both. Air Force brat turned Air Force wife, she was born in Europe, has lived in Japan and in several states of the US, including Virginia, Florida, North Carolina, Texas, California, Maryland and Hawaii.

She moved a lot in her younger years and remembers all too well being the new kid in fish-out-of-water situations. But those experiences only made her better able to adapt, as well they gave her a love of travel, preferring road trips over flying.

Turning her favorite pastime into her career, Renee loves to build worlds and torture her characters for the enjoyment of her readers. She can’t fill everyday with writing alone, and also enjoys watching anime, reading manga, crocheting, knitting (yarn and mail), and binging shows on Netflix. She’s a Whovian (David Tennant for the win!), a trekkie (DS9 because Odo rocked), and a fan of pretty much every Marvel live action movie and DCU animated movie.

She has a wacky imagination and tends to write all over the place. In order to keep up, she only asks one thing—Leave Your Reality Behind to Discover Different and Unique Romance & Erotica.