Ravon Silvius here! I am an author with Dreamspinner Press and Extasy books, and I write M/M books with a sci fi and fantasy flavor. Today I’m going to talk a bit about life goals and dreams. And after that, I’ll introduce my newest release from Dreamspinner Press.

Dreams, fantasies, desires…everyone has them. They can be anything from becoming an astronaut (sadly, I had to give up on that early when I realized just how bad my vision was) to finding love. Dreams and hopes are part of what makes us human and keep us busy in our lives.

I’ve even made a list of my dreams. Some of these are dreams from when I was a kid, and some are ones I developed later on. Some, of course, will likely never happen, but hey, that’s what dreams are
or! Here’s my bucket list. What does yours look like?

2. Be in a movie: Haven’t done this yet. This is one of those dreams that’s unlikely to come true. I was in a video on youtube, though. I was random unnamed villain number 2, and my face was covered, but it still counts!

3. Be physically fit enough to do gymnastics: Still working on this one. I’m likely to be working on it my whole life. It doesn’t help that as I get older doing somersaults and the like makes me incredibly dizzy. But hey, even the attempt at it will keep me fitter than I would be otherwise, right?

4. Last but not least: Publish a book. Done! Freshman Blues is my very first print book! And now I’ll talk a bit about it.

Freshman Blues is a New Adult book about Chris Taklo, a young gay man who enters college for the first time. But the world he lives in isn’t like ours—in this world, people can develop superpowers based on their field of study, which are called abilities. People’s dreams revolve around acquiring these powers, which can be anything from levitation to empathic skills. Chris never thought he’d have such an opportunity. And as he strives for an ability of his own, he also has another dream—to find love with Frederick, another student he meets at college.


The book is about dreams and desires for life and love, and how those things are shaped early on in life by one’s experiences. Dreams are one thing, but they are different for different people, and they change as life goes on.

So, what sort of things shaped your dreams? What are your dreams for life, or are you still figuring them out? Share in the comments, if you’d like! 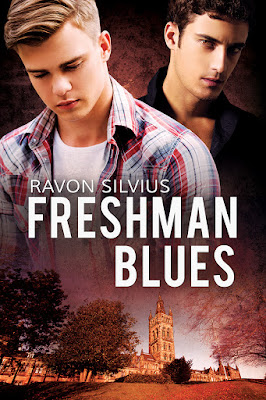 When Chris is invited to prestigious Creekville University, he discovers he is part of an experiment by the mysterious Professor Faran. There’s no other way a C student like him would have been accepted into a college where academic mastery results in unique powers like levitation or empathy. But if Faran is right, even below-average students can get special abilities and a good job after graduation. Chris just has to work hard.

Chris isn’t the only one, either. Frederick has worked for Faran for years, and Chris is intrigued by the aloof and sexy older student. But Frederick is too terrified of life after graduation to pursue romance. As they work together, Chris tries to help Frederick out of his depression, all while juggling friendship, classwork, dating, and trying to carve out a place he can belong.

But funding for the experiment is running out, and Chris has to acquire an ability—any ability—soon, or he’ll lose his opportunity at Creekville, and any chance with Frederick, for good.


If you’re interested in reading Freshman Blues, you can check it out at Dreamspinner press, Amazon, at All Romance Books, and anywhere else books are sold!