Must Love Dogs, my latest novella from Dreamspinner Press, focuses on the emerging love story of Ben and Jay.


I've written stories with disabled characters in the past, but I tend to gravitate towards mobility issues rather than losing one of the senses. When writing a blind character, it poses the challenge of how to describe the world to the reader without the use of visual cues. Ben has to rely on his sense of hearing, smell, and touch to ground him and share what's going on around him. I hope I achieved that through this novella.

When Ben lost his sight, he had to learn to adapt. He was a painter, so how does someone who relies so much on his sight for his career find a new path? In the case of Ben, he is just starting to explore other artistic outlets. He used to sculpt, and has been using that as a means of recovery since it allows him to explore his work through touch. In the novella, he is thinking about whether he can make a living through those means now. It's a time of new beginnings, and Ben's ready to take that next step.

Having a blind main character also focuses on the issue of not judging someone by their appearance. Ben is self-conscious of how he looks, especially because of the scar that is left on his face as a result of the mugging. He cannot see for himself how bad it looks, so he relies on others to tell him. And even though they tell him it's not bad, that his glasses cover it up mostly, his mind still conjures up mental images.

He has a lot of mental images to fill in the gaps of what he cannot see. Though he tries to stick to places he's been prior to going blind, he cannot do that always. So, he makes up a picture in his mind of how the veterinary clinic looks, how the streets might look, and how Jay looks...though the latter doesn't matter as much as how Jay acts. The way he treats Ben is what brought them closer, and what ultimately makes Ben fall in love with him. Jay doesn't see his limitations, but instead the person he is. Seeing what's inside is what it's all about. The heart loves who it loves, no matter what the outside package. 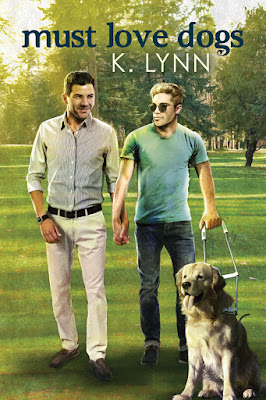 Since a mugging a year ago, Ben’s lived with blindness. Despite an art career on hold and a deadbeat boyfriend who left him because of his disability, he's finally getting his life back on track. Ben is gaining a new sense of independence thanks to his guide dog, Colt.

But Ben’s carefully balanced life is thrown into chaos when veterinarian Dr. Jay Connor hits Colt with his car. While Colt is on the mend and recovering nicely, Ben finds that Jay is not only fond of Colt, but also quite interested in Ben.

However, one overheard conversation might put a stop to their romance before it can grow into something more. Maybe Ben’s destined to go it alone in the dark. Or can Jay help him see there’s still a chance for happily ever after?

Must Love Dogs is available from:

K. Lynn has been an avid reader and writer since childhood. While in college, K. Lynn increased her involvement in LGBT issues and writing within the LGBT fiction genre. She has become a long-time fan of the authors that seek to explore the commonality that exists within all sexualities and genders. Most of K. Lynn's work features LGBT characters, many of whom are in established relationships and show how love perseveres through every trial and tribulation that life holds. She also has a particular interest in seeing transgender characters gain a larger foothold within the LGBT fiction genre, hoping that the market for these works expand in the future. Contact K. Lynn at writerklynn@gmail.com or follow her on Twitter @WriterKLynn