Dream a Little Dream of Me

I’ve always been blessed (or cursed) with unusually vivid dreams. Sometimes the dreams are your usual variety of somnolent acid trip (dancing with a rainbow-hued tiger while extreme sport guru Bear Grylls wades through lava with the orange school lunchbox I had when I was five) and sometimes they’re eerily prescient or even historical. I once woke abruptly from a very vivid dream of being a Roman arena slave watching the eternal city burn to the ground. When my dad woke me, I was down on my knees screaming “Rome! Oh my God no! The fire!” 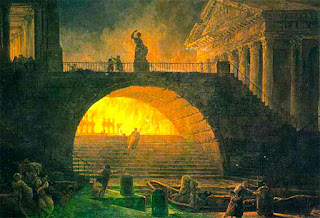 For a writer, vivid dreams and their attendant imagery can be a very useful resource. A dream image may resonate with us for days, weaving itself into our waking lives, haunting us. A nighttime vision of a departed loved one can instil feelings of love and security; ‘seeing’ a cherished friend or family member can be a kind of visitation.  Several days after my old dog died (she was fourteen when she passed, and she had been very ill with cancer) I dreamed of meeting her in a field of beautiful wildflowers. She was no longer old and no longer sick. She was young and vibrant and free. 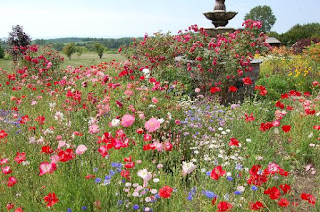 The characters who’ve visited me are usually the ones with whom I feel a deep connection – as if they were more than fictional, actually composed of some reality of their own. Characters who appear in my dreams often appear in the dreams of other characters, a kind of boxes-within-boxes – Freddie Crook, Philemon Raft’s fearless constable and lover, (Come to Dust) shows up in Raft’s dream, while Freddie is in South America, recovering from a laudanum addiction. Freddie is also the character of whom I dream the most, perhaps because he has a certain reality and solidity to him. I remember telling a friend once that “Freddie is real!” because there were times when it seemed as though he came and sat beside me. (That either makes me artistic or delusional. You be the judge.) 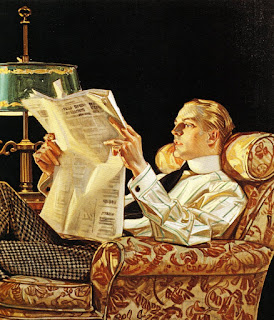 From time to time, I’ve dreamed plots. The second book in the Inspector Raft series, Rag & Bone, came from a dream I had about an old rickety tenement building with some sort of liquid dripping from the ceiling constantly. In my dream, the liquid turned out to be alcohol illegally stored in barrels in the attic – alcohol which later caught fire, turning the building into an inescapable inferno. As soon as I woke up, I wrote it down. I knew if I left it for later I’d forget it. I’m glad I did jot it down, because it soon developed into a plot that I was able to spin into a nice piece of fiction.

One of the more interesting things about dreaming is the evolution of landscape in my dreams – houses, streets, cities, towns, secret passageways, and so on. There is a particular city that ‘exists’ in any “urban” dream I have. It’s always the same city. I’ve come to know it so well that I can direct my dream-self where I want to go – say, up one street and not another, or to stop in front of a particular house or other building. If my dream-self is trying to get somewhere, I can point out shortcuts for her to take. I know what every part of this city looks like, from the downtown/waterfront area to the uptown.

Sometimes I meet people I know in my dreams, usually within the confines of this dream city, and I wonder if they, too, are dreaming and we’ve somehow managed to cross paths. A lot of the time these are fellow authors – only very seldom are they family members or other relatives. Usually we converse for a while, or give each other directions or advice. Sometimes the people I meet are dream constructs, no one I know in the waking world. Often they are benevolent and helpful but a few times they have been hostile and combative, and I’ve had to escape by running away – or waking up.

I’ve had dreams, however, that were familiar to other people. Once I dreamed I was in a Grecian temple in a half-flooded world where there were dolphins and abundant sea life, and people eating fruit and playing musical instruments, conversing, gossiping, living. I told my mother this dream and she said “Oh, you dreamed of Atlantis!” 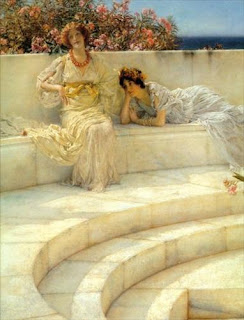 One of the most terrifying dreams I have ever had seemed to take all night and felt more like a memory than a mere brain invention. I was standing in a city on an alien world, a very beautiful city made of sandstone, with narrow, cobblestoned streets and tall buildings. There was a very heated debate going on when I arrived, between two separate factions of people, each of whom had a different idea about a certain weapon that had been proposed. The assurances that it was perfectly safe didn’t ring true for the opponents of the plan, who feared total annihilation should they ever deploy it. This conversation took place time and again in various parts of the city, in shops and businesses, in temples and universities.

The people of this alien world looked exactly like humans except for one thing, a translucent strip of some material worn on the forehead, that seemed to register thoughts and emotions. The people were very intelligent and their society highly developed, and all seemed to be well except for the ongoing debate about this weapon. Gradually the ‘for’ side began to win the debate. Against great opposition, the weapon was deployed, whereupon it promptly destroyed the entire planet. I remember in the dream I seemed to be floating in space (?) a little ways from their world, watching as it crumbled into dust. They had destroyed themselves. Believe me, that dream stayed with me for a long time afterwards. 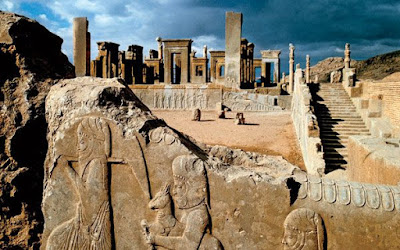 I’ve saved the worst and most frightening for last: night terrors.

Night terrors or pavor nocturnis (to use the Latin name) are literally the most scared you can be without being awake. While I often had nightmares of the usually childish variety as a kid, night terrors seemed to occur only after I became an adult. Thankfully I haven’t had any lately, but fifteen or so years ago they were an almost nightly occurrence. While many people experience bad dreams and other ‘parasomnias’ (such as sleepwalking, talking in your sleep and so on) night terrors are, for most people, rare. A sufferer describes it thus:

Occasionally as an adult, for days on end, months at a time, I wake to find myself in a state of panic, clutching my chest, gasping for air, drenched in sweat. (Lizette Boreli, Night Terrors in Adults: When Sleeping Turns to Terror After Dark)

That pure and absolute horror has no equal; the fear you feel during a night terror invades and owns your mind, pushing out all other thoughts and destroying your capacity for reasoning. Moreover, the imagery of a night terror usually consists of brief, repeated scenes that are often not even remembered the next morning! (My husband would frequently advise me when I’d had a night terror. I never recalled it. Once he told me about it, however, the experience came streaming back.) For me, the imagery was always the same and always so terrifying that it reduced me to a primal, animalistic fear.

Here’s how it went: I would be dreaming your average kind of dream (floating down a river on a refrigerator with Napoleon and his cousin Harold) when the dream would ‘split open’ – that’s the only way I can describe it. Where the dream images had previously been, now there were three figures standing around my bed, all of whom bore a strong resemblance to the ‘grey’ aliens of modern urban folklore. Those are the little ones with the grey skin and the huge eyes that seem to always crop up on TV shows like The X-Files.

One was standing at the foot of my bed while the other two were on either side. I was terrified and wanted desperately to get away but couldn’t move. Occasionally I would bolt from my bed and run shouting throughout the house, bumping into walls and furniture and sometimes injuring myself, although never severely. Every time I had a night terror, the images were the same: three aliens standing around my bed. Every time I ran screaming from them, I would say the same thing: It’s too late. They’re already here. 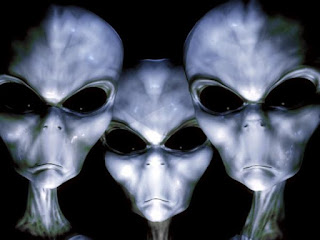 These terrors (and they are aptly named, believe me!) persisted for several years and gradually faded away on their own. I haven’t had one since. Nowadays my dreams mostly consist of elevators, airplanes, or telephones that don’t work. Occasionally I dream about my late grandmother, which is always comforting and very nice. I seem to have left behind the sleepwalking and out-of-body experiences of childhood, as well as nightly horror shows featuring scary aliens. I can’t remember the last time I had a nightmare. Now I go to bed with earplugs in and listen to an audiobook, so maybe that has made the difference; I don’t really know. Falling asleep to the sound of someone else’s voice is comforting, and in a way it’s like having a parent read you a story, like they did when you were a child. It gives a sense of safety that allows me to lay aside the waking world and slip ever-so-gently into the waiting arms of Morpheus. 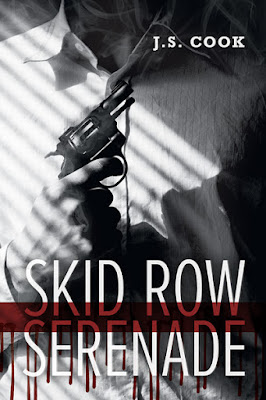 In the tradition of novel noir, nothing is ever quite as it seems.

Novelist and war hero Tony Leonard sees private investigator Edwin Malory being mugged outside a seaman’s mission in downtown Los Angeles, so he takes him home and gives him clean clothes and access to a hot shower. It doesn’t take him long to discover Malory was hired by wealthy industrialist Linton Vanderbilt Stirling, the father of Tony’s estranged wife, Janet. The reason for this is simple: Tony’s father-in-law suspects him of drinking away his daughter’s personal fortune.

On a whim, Tony drops in on Janet one night and finds her naked, dead, and tied up, her skull beaten in. Horrified, Tony flees the scene, knowing that as her husband, he is the number one suspect in the killing. He sees only one way out. He needs to fake his own death.

And who better to send his “suicide note” to than Edwin Malory.

J.S. Cook (JoAnne Soper-Cook) published her first story when she was 8 and hasn't looked back since. Don't let her cynical exterior fool you: this author (whose nickname at university was 'Sarcasmo') is a hopeless romantic and a big mush. She is a dog mom and supporter of animal rights, whose children have four paws and fur. She writes crime/mystery/noir. She does her own forensic experiments.