Whether in real life or on the page, a question people and characters face is: How to keep a relationship hot and interesting, after years of being together?

When Phoenix (Love in Los Angeles, Book 3) opens our protagonists and leading couple, Alex and Paul, have (spoiler alert!) been together for eight years and married for three. They’re deeply invested in their own careers and friendships, and reeling from the tragedy that has struck their social circle.

In this context, sex and physical intimacy is different than it was in the honeymoon phase of their relationship. Which left us with a problem: How could we, as writers, keep Paul and Alex’s sex life interesting enough to capture the attention of readers?

Our solution was largely to write the problem. Couples that have been together that long do face the challenge of how to keep life in bed interesting. And so we had Paul and Alex deal with that themselves: Not only do they have to negotiate interpersonal crises together, they also have to figure out how their evolving relationship and their own personal grief are reflected in sex. We -- and they -- hope their journey on the page is hot, interesting, and truthful. 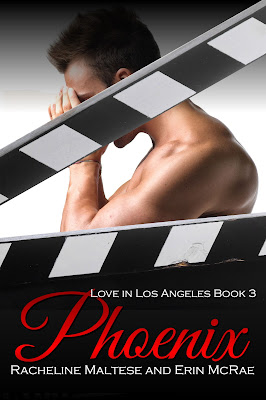 Sometimes the end of everything…

Now happily married to writer and producer Paul Marion Keane, television star J. Alex Cook’s life has been a fairytale of success and romance for years. But when an unexpected tragedy throws his and Paul’s social circle into chaos, the alumni of hit TV show The Fourth Estate are forced to pick up the creative pieces left behind.

...is just the beginning

Confronted with his own mortality, Paul suggests he and Alex start a family. But figuring out what family means when your best friends’ polyamorous marriage may be melting down and you have Hollywood’s most malevolent fairy godmother to thank for your success is no easy proposition.

As Alex questions whether anyone in a profession full of make believe can truly have fame, fortune, kids, and the happily ever after of their dreams, he sets out to take control of his own life and discover that the best love stories never truly end.


Phoenix is Book 3 in the Love in Los Angeles series.


Alex’s eyes flutter shut when Paul slides his hands into his back pockets and pulls him closer. They’re not dancing so much as grinding together, but they’re hardly alone in that regard—at least they still have their shirts on, and if Alex is willing, Paul has absolutely zero desire to stop.


Paul can’t hear it, but he can feel the breath of a moan on his neck when Alex gets insistent about digging his fingers into Paul’s hair while he mouths at the skin above his collar. Six months apart, with only two weeks in the middle, was a very long time, and the time they’ve had since has barely been enough to get used to sharing space with each other again, much less fall back into their relationship with all their knowledge of each other’s bodies and hearts intact.


“This is possibly a stupid idea,” Alex murmurs at some point.


Phoenix is available from the following retailers:


Erin McRae is a queer writer and blogger based in Washington, D.C. She has a master’s degree in International Affairs from American University, and delights in applying her knowledge of international relations theory to her fiction and screen-based projects, because conflict drives narrative.

Racheline Maltese lives a big life from a small space. She flies planes, sails boats, and rides horses, but as a native New Yorker, has no idea how to drive a car. A long-time entertainment and media industry professional, she lives in Brooklyn with her partner and their two cats.

Together, they are co-authors of the gay romance series Love in Los Angeles, set in the film and television industry -- Starling (September 10, 2014), Doves (January 21, 2015), and Phoenix (June 10, 2015) -- from Torquere Press. Their gay romance novella series Love’s Labours, set in the theater world -- Midsummer (May 2015), and Twelfth Night (Fall 2015), is from Dreamspinner Press. They also have a story in Best Gay Romance 2015 from Cleis Press and edited by Felice Picano. You can find them on the web at http://www.Avian30.com.