There’s no question that the friends-to-lovers theme is one of my favorites. Maybe it’s because I grew up watching movies like When Harry Met Sally and shows like Friends, or maybe it’s because I’ve had more than my share of male friends who’ve gone on to become more-than-friends. Whatever the reason, it’s a trope I always enjoy reading and often find myself writing.

What is it about friends-to-lovers stories that’s so appealing? Lots of things. Friendships are close relationships. They’re fun. They’re intense. They’re playful. They’re serious. Friends are the people who know your secrets and like you anyway. You can depend on them. Call them when you’re in crisis. Count on them to cheer you up and want to be there when they need you. There’s an intimacy to friendship that is as personal, deep and bonding as any aspect of a lover’s relationship. So, when someone you’re friends with suddenly (or not so suddenly) seems attractive in addition to all the other things you already adore about the person, the result can be earth shattering.

Realizing that someone you’re such close friends with is someone you’re thinking about in a more-than-friendly way is something that can shake anyone to their core. Everything between you and that friend takes on new meaning. Double meaning. Meaning that keeps you up nights questioning its significance. Did he always hug me so long? Was he watching as I walked away? What did it mean when he said he loves me? Simple things become complex. Possibilities become endless.

Friends who become lovers have a head start in the intensity department because there’s already a level of closeness and caring that isn’t present in brand new relationships. It adds a whole new dimension to what you already shared. That can be exhilarating, terrifying, overwhelming, or more typically some combination of all three.

That’s what makes the friends to lovers storyline so intriguing to me. The dynamics of a friendship are already so complicated and layered I love writing them. Adding the extra ingredients of love, lust and attraction just take that over the top. In a deliciously wonderful way. I love watching it happen with real life friends, I’ve adored the times it’s happened in my own life, and when it happens between characters I’ve created it’s downright magical.

I’ve been writing romance novels for the past five years. The first several were straight romances but, over the past few years, I’ve started writing gay romance as well. Whether the characters are straight or gay, the friends-to-lovers trope is still my favorite to write. In the MOMENTS IN TIME series, Collin and Tanner are college roommates who fall in love in book one (Moment of Impact) and go through the many ups and downs that confront new couples in all three books in their trilogy (no cliffhangers, each novella in the trilogy has its own ending, the couples’ journey just continues). In Tonight, David is a college junior who’s had a crush on his older brother’s best friend Wiley for five years. The problem? Wiley’s straight. Or at least that’s what David’s brother’s been telling him for years…. (Tonight was written as part of the Goodreads m/m romance group’s Don’t Read In The Closet/Love Is An Open Road program and can be downloaded free as a mobi, epub or PDF file here: http://www.mmromancegroup.com/tonight-by-karen-stivali/ ) 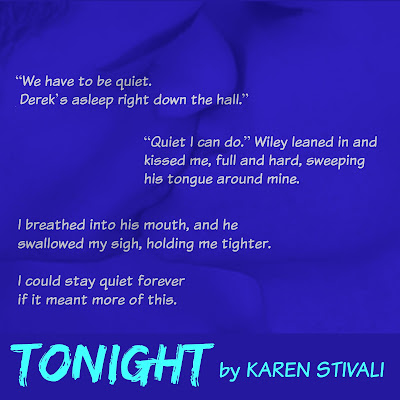 Have you ever had a friendship turn into more? Have you ever watched two friends as they fell in love? Did you know before they even realized or admitted it? Tell me your favorite real life friends-to-lovers story in the comments! 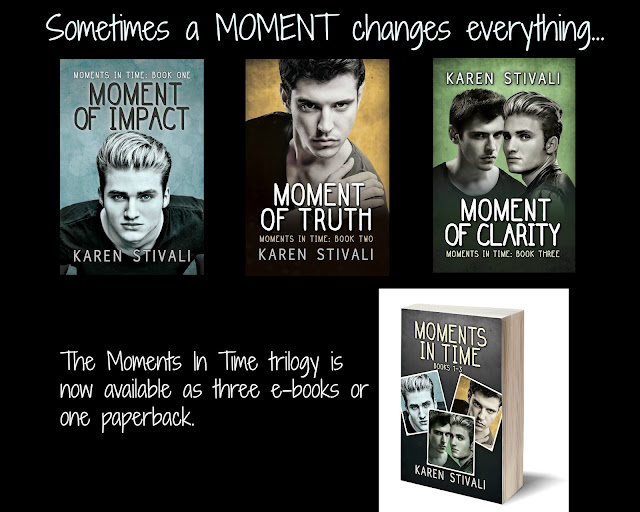 Beyond Collin Fitzpatrick’s dorm room, the students of his conservative college think he’s straight, as does his Catholic family, who'd disown him if they learned the truth. Inside, he’s safe with his sexy roommate Tanner D’Amico. Tanner wants to show the world how much he loves Collin, but Collin’s not sure he’s ready for the impact stepping outside will make.

Collin expected to spend another summer fixing cars and working at the college pizzeria. Instead, he's living in a beach house on Fire Island, and for the first time, he and Tanner can publicly be known as boyfriends. Being “out” takes some getting used to, and doubt and jealousy threaten their happiness. Collin and Tanner must confront the truth or risk losing it all.

Spending the summer on Fire Island brought Collin and Tanner closer than ever, but back in their conservative college town, new challenges confront them.

When Collin's relationship with Tanner becomes an issue in his brother's custody battle and Tanner struggles with feelings for his heartbroken friend Wendy, Collin wonders if everyone would be better off without him. In order to save them both, Tanner must make it clear his love for Collin is all that matters.

Please Note: The MOMENTS IN TIME series is a trilogy that’s meant to be read in order. All three novellas can be ordered individually or the complete trilogy can be ordered as one paperback volume. 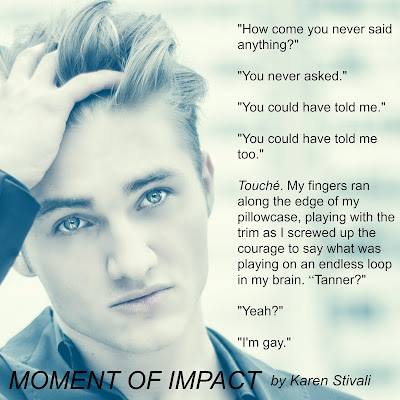 Karen's lifelong fascination with people has led her to careers ranging from hand-drawn animator, to party planner, to marriage and family counselor, but writing has always been her passion. Karen enjoys nothing more than following her characters on their journey toward love. Whether the couples are m/f or m/m, it’s guaranteed that Karen's novels are filled with food, friendship, love, and smoking hot sex—all the best things in life.

When Karen isn’t writing (and often when she is), she can be found on Twitter attempting witty banter and detailing the antics of her fruit-loving cat, BadKitteh. She loves to hear from readers (and other writers), so don't hesitate to contact/follow/like her at: 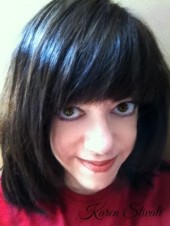