Friday, our buddy, Meg Amor, came buy with a giveaway of a digital copy of her latest release, Hawaiian Lei.  I'm pleased to announce that the winner of the random drawing is...

Congratulations!!  Meg will be in touch soon about your prize.  :)

And once again, thanks to Meg for being our guest here at CoP! 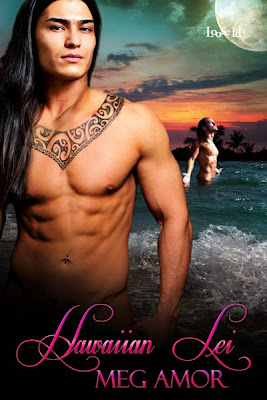 Beau Toyama, biplane pilot and flight instructor on the Big Island of Hawai’i has only been out for a year. His last relationship with a man was a disaster. When he meets Matt Quintal, who’s visiting his sister, he’s stunned by the instant attraction to him. But Beau’s afraid to ask for what he needs in a relationship; his anger frightens him. The “mixed plate” Hawaiian/Japanese/Tahitian man works on being Zen calm but Matt brings all his emotions to the surface. It uncovers a devastating secret from his childhood and deep shame that needs healing.

Matt Quintal, New Zealand painter has been living the wild gay life in LA. After one more night of soulless mechanical sex where his body is engaged but his emotions aren’t—he knows he needs a change. His sister wants him to come to Hawai’i for a visit; another big rock in the middle of the Pacific doesn’t seem like a solution but he has to do something. When he flies with Beau in his biplane, he feels a strong pull toward both man and plane that he can neither explain nor deny.

Matt’s a New Zealander, they’re encouraged to be tough, rugged and durable. He is, but he's emotionally a wreck, afraid to show his emotions, so he’s surprised when Beau encourages him to be all of himself. Has he finally found the freedom to be the man he wants to be? The heat between the two men is like watching Pele let her hair down, releasing her hot, molten lava. Will the gorgeous Hawaiian with his long silky black hair and soulful brown eyes finally convince the gypsy nature in Matt to put down roots in another island culture?

Hawaiian Lei is available from:

Meg hand-wrote and “published” her first book when she was eleven about her parent’s separation. Constantly told as a child she had a vivid and (over) active imagination, the dawn of the computer era meant she could now take dictation at speed from the interesting characters galloping around her head.

She grew up in New Zealand, and temporarily lives in California with her American fur children: Leo Ray Jr., and Mr. Beaumont, the Ginger Ninjas. Her heart and soul are split between her American home state of Hawai’i in Kona on the Big Island, and the sultry, steamy Southern city of New Orleans. Nearly all her books are set in Hawai’i or New Orleans, along with snatches of New Zealand for good luck.

Meg’s a gypsy at heart and loves to travel all over the world. She has a love of open cockpit biplanes and the gentle waft into the air from a grass strip. Given a choice, she’d eat out most nights. Fine dining, French, Fusion, Afghani, and Burmese food are some of her all-time favorites. But her favorite junk food is New Zealand fish and chips cooked in pure fat. Never one to do things by halves, she believes in the motto “Amor Vincet Omnia”—Love Conquers All.