What's Coming Wednesday - On the Clock by Witt & Voinov

Today we have something a little different for us.  A cover reveal!  A cover reveal of the upcoming release (July 13, 2015) from Riptide Publishing, On the Clock by L.A. Witt and Aleksandr Voinov, the latest entry in the Market Garden universe. 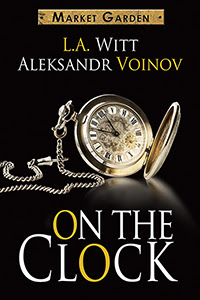 On the Clock (A Market Garden Novel)

When Blake Raleigh’s favorite rentboys retire from Market Garden, they’re sure their friend Jason will be a perfect replacement. Though Tristan and Jared are a tough act to follow, Blake returns to London to test out their recommendation.
Jason is right on the money. Negotiations turn him on. Getting paid turns him on. The higher the stakes, the hotter things get. Each trip to London is more expensive than the last, and the webcam sessions don’t run cheap, but Jason is well worth the sticker shock.
The more time they spend together, the more Blake wants, and not just sex and transactions. But Jason’s been burned before by men who thought they were in love with him, and he’s not making that mistake again. When the lines between personal and professional start to blur, it’s going to take more than money, jewelry, and sports cars to keep Jason from clocking out and walking away.

On the Clock is available for pre-order from Riptide Publishing now.

Aleksandr Voinov has been published for twenty years, both in print and ebook. He has ten years’ experience as a writing coach, book doctor, and writing teacher, and until recently worked as an editor in financial services.
After co-authoring the M/M military cult classic Special Forces, Aleksandr embarked on a quest to write gritty, edgy, sometimes literary M/M and gay fiction (much of which is romance/erotica)—the only way he can use his American Literature degree these days.
He’s been published with Heyne/Random House, Carina Press, Samhain Publishing, and others, and is an EPIC Awards winner and a Lambda Awards finalist.
Connect with Aleks:
Website: aleksandrvoinov.com
Blog: aleksandrvoinov.blogspot.com
Twitter:@aleksandrvoinov
Goodreads: goodreads.com/Vashtan

L.A. Witt is an abnormal M/M romance writer who has finally been released from the purgatorial corn maze of Omaha, Nebraska, and now spends her time on the southwestern coast of Spain. In between wondering how she didn’t lose her mind in Omaha, she explores the country with her husband, several clairvoyant hamsters, and an ever-growing herd of rabid plot bunnies. She also has substantially more time on her hands these days, as she has recruited a small army of mercenaries to search South America for her nemesis, romance author Lauren Gallagher, but don’t tell Lauren. And definitely don’t tell Lori A. Witt or Ann Gallagher. Neither of those twits can keep their mouths shut.