The last six months or so have been, as Arte Johnson used to say on Laugh-In, verrrrrrrrrrrrry interesting. For those of you who were worried that I might have forgotten to fasten my seat belt, and fallen right off the face of the planet as a result, I thought I’d do a quick retrospective. Assuming I can remember all the twists and turns. My date book isn’t much help – you’ll understand why in a few minutes.

Back in January, I bought back the rights to the first four SoulShares books – Hard as Stone, Gale Force, Deep Plunge and Firestorm – from my original publisher. I’d already sold the first book in what I’d originally conceived of as a successor series to a new publisher, late last year, but when the first four books became available, Lori proposed reissuing them, with all new covers, and with an extra I’d always wanted to add – Fae-language dictionaries.

I was thrilled. I’ve learned something, working on the SoulShares… if you commit to writing an eight-book story arc, you really shouldn’t be surprised if your characters start changing things up on you, midway through the series. Just as one example, blond twink mage Conall (Gale Force) announced toward the end of Deep Plunge that he’s actually a redhead, thank you very much indeed, and has been all along. Does he care that I can’t recall his book from Amazon and B&N and ARe and everyplace else it’s found its way to and fix that little detail? He does not. (Fae aren’t big on empathy, they’ll be the first to tell you that.) Then there were all the scenes I’d realized too late were going to be important two or three books down the road, that needed, well, more. And the song lyrics I’d borrowed for club music and ringtones before I had any idea you weren’t supposed to DO things like that. And all the scenes and lines and descriptions and dangling participles (well, okay, maybe not dangling participles) (many, anyhow) that were edited out the first time around and that I wanted put back in, dammit. And Oxford commas. LOVE me my Oxford commas. And Yale, Harvard, and Radcliffe. And the University of Southern North Dakota at Hoople.

So as soon as the ink was dry on the new contract (actually, before that….) I sat down with a paperback copy of each of the old editions and started scribbling in the margins, noting where things needed to be put back, where things needed to be expanded, highlighting all the as’Faein snippets. Dusted off the old manuscripts, opened them up, rewrote. Four books. All the while working on Mantled in Mist, book six in the series.

Finally, all eight of the lads in the first four books were spiffed up to my specifications, and I sent them off in late February.

That was where the fun started.

“How about we release one per week, starting in April?”

“Um…. Okay, sure.” (It’s been so long since I’ve had a book come out, I can’t really remember how hectic it was, one per week should be do-able, right?)

“Whoops, April isn’t going to work, I can’t get five consecutive Wednesdays with room for new releases. How about one every other week, starting the beginning of May?”

“That might be better, it’ll give us some more time, right?”

Send off an e-mail to Will, my go-to publicity maven – “Can we do a joint cover reveal for the first four books?” “Sure, just get me buy links two weeks in advance of the cover reveal.”

E-mail the publisher. “How soon can you get me buy links?”

“The day before the release.”

“Eeeep. Okay, how far out do we have to push the releases, in order for you to get me preorder links ahead of time?”

You get the idea.

Then the fun started. (Yes, I know I said the fun started before that. I think that was called dramatic license. Or possibly hysterical amnesia.) All the manuscripts I’d sent off were in my old publisher’s format. They all had to be reformatted. By me. I will draw a veil over the ensuing few weeks. Suffice it to say that Dante apparently left out the circle of Hell reserved for em dashes.

Finally, the first book was reformatted. With whole days to go before the deadline for getting preorder buy links for the cover reveal. DAYS.

Then I got back the galley proofs.

But… it’s like a ballet. No matter how chaotic, if not downright insane, it might be backstage (or upstage, for that matter – I used to be a supernumerary for American Ballet Theatre, and believe me, I know whereof I speak), when everyone wants things to come together, wants hard enough and with enough pixie dust, things do. Come together. My books are togethering quite beautifully. Hard As Stone debuted on May 27, Gale Force on June 10, and Deep Plunge is coming out this very day, June 24, just in time for Pride and my birthday and the third anniversary of my very first contract (all June 28). Here are the covers, and the links, and I’m throwing the Firestorm cover in as lagniappe even though it doesn’t have a link yet (July 1, the good Lord willing and the creek don’t rise) because it’s just so gorgeous I can’t stand it.

And please come visit me at www.rorynicoileain.com when you get a chance. I may be a little quiet right now, but the link for Firestorm will magically appear there, as will the link for Blowing Smoke on July 15 – the first all new SoulShares in a year and a half. At that point, I will be at Rainbow Con, trying to find out if the poolside bar (they’d better have a poolside bar, is all I can say) knows how to make celebratory frozen raspberry bellinis.

And then? Back to work on Undertow (SoulShares #7). Not sure what I’ll do with myself, being able to focus on one thing at a time…

…wait, what’s that? A Lamia? Wait your turn – hey, what are you – you’re not supposed to shed for another two – 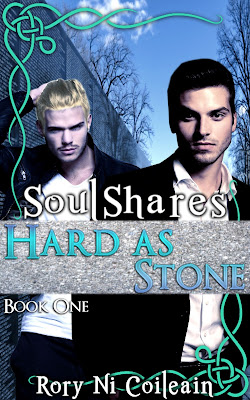 Tiernan Guaire was exiled from the Fae Realm a century and a half ago for his brother’s murder. His soul torn in half, he lives by his vows — never to trust, never to love. And if he can only be whole by finding and loving the human with the other half of his soul? He’s content to live broken and half-souled.


Kevin Almstead’s future, the career he’s worked for as long as he can remember, has been taken away by a vote of the partners at his law firm. Chance brings him to Purgatory, the hottest all-male nightclub in Washington, D.C., to a meeting with a Fae, with long blond hair, ice-blue eyes, and a smile promising pleasures he’s never dreamed of. But there’s no such thing as chance.

But Tiernan isn’t the only one to find Kevin in Purgatory. The most ancient enemy of the Fae race sees in the handsome lawyer a way to destroy the world from which it, too, was exiled. And only the strength of a true SoulShare bond can keep it from what it seeks.

Hard As Stone is available from:  Amazon and All Romance 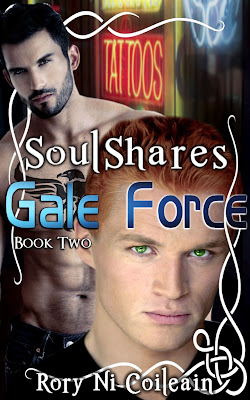 Conall Dary is the mightiest mage born to the Fae race in more than two thousand years, ever since the Sundering of the Fae and human worlds. But that power condemns him to an untouched, virginal life — sex calls to power, and his power is enough to drain the magick, the life, from his entire world. Exiled from the Realm for refusing to turn his talent to service a Noble’s petty revenge fantasies, his soul is torn in two and his magickal gifts blocked.

Josh LaFontaine is a gifted tattoo artist with a heart of gold. While doing a good turn for an ex-boyfriend, he’s stunned when a gorgeous red-haired twink appears out of nowhere at his feet during New York City’s Pride march.

The Marfach was thwarted in its first attempt to capture a Fae. But when a terrible accident separates Conall and Josh before they bond, it’s a race to see who finds the mage first, the monster who will use him as a weapon to destroy his race, or his SoulShare.


Gale Force is available from Amazon and All Romance. 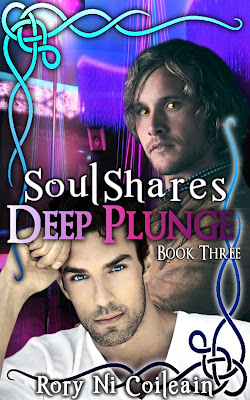 More than two thousand years ago, the healer Lochlann Doran was the first Fae to leave the Realm after the Sundering of the Fae and human worlds. After centuries of wandering the human world, seeking his SoulShare, he has spent all his magick, and lost all his hope.

Garrett Templar is the star pole dancer at Purgatory, the hottest gay nightclub in Washington, D.C. If his past hadn’t taught him the futility of hope, his present surely would; HIV-positive since age 18, his illness has suddenly and inexplicably mutated into drug-impervious AIDS.

A SoulShare bond with Garrett may give Lochlann back his magick, his gift of healing. But it also might kill him. And if he survives the return of his magick, the Marfach and its host are waiting to use the dancer as bait in a deadly trap. Only an impossible love can save them both.

And everyone knows Fae don’t love….

Deep Plunge is available from Amazon, Barnes & Noble, and All Romance. 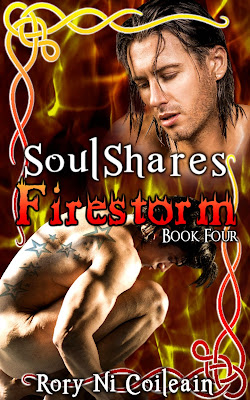