Hi, I’m Ki Brightly, the writer who brought you Threefold Love. Welcome to my tangled brain.

In it you will find book ideas floating like small flickering candles in the darkness alongside tiny wisps of fantasy clouds pulsing with a pleasant pink neon light. If you get close to one of those clouds it will follow you around and start to nag at you and demand things like background story and a name. You can poke it with a stick, but in my experience that only encourages it. Fantasies and dreams are tricky business. I’ve always had mind movies that play in my head, especially when I’ve got nothing better to do, like when I’m trying to fall asleep. I’ve spent hours in my bed before, staring at the ceiling while I fight with sleep, allowing a story unfold in my brain. Sometimes the stories are amalgamations of a movie or book whose characters I am currently crushing on, but more often than not they’re something my brain just cobbled together for my own amusement.

My favorite fantasies are always mind movies, not still shots of perfectly rounded asses or erect throbbing cocks under cut six pack abs, though that’s part of it more often than not. They usually start out a little hazy. The conception of the main player comes first. One of my favorite characters that I like to revisit when I’m having a night alone in my bunk is of a young guy, probably early twenties, in his college years. He’s a whip thin, sun kissed beach warrior with brown hair gone white at the tips, and a shy, pearly smile. Usually he’s sitting on the sand watching the sunset in red board shorts, using his surf board as a pillow while he reads a book. He’s had a long day of surfing and the ocean clings to his skin. (Don’t judge me. Writers think books are super sexy.) Enter a windblown attractive Latino man, wearing nothing but jeans with his tee shirt tucked into the back of his pants accentuating a nice bubble butt. He’s a couple of years older, just enough that he’s lost all of the kid out of his face. He’s got a strait nose and a plump bottom lip. He works out to keep his solid shoulders and biceps you could never hope to span with two hands. He walks by the kid who’s reading, knees bent, flashing a hint of leg high under his shorts. The darker man sits down nearby on a bench with a sketch book in his lap. He arranges himself so he has a good view of our surfer and takes a few graphite pencils out of his small travel bag.

An hour goes by and the beach bum sits up, yawns, looks around a little dazed after emerging back into reality from his book. He glances around and sees the artist, browns furrowed, lip between his teeth while he’s drawing. The artist glances up and the surfer smiles at him before he starts to gather up his board to go home.

Even during private happy fun time, I’m a masochist. I drag this out. Their chance beach meetings go on for weeks, a small flirtation begins, and eventually the surfer realizes he’s the artist’s subject. One afternoon surf boy comes out of the ocean (this entire scene is set vaguely is So Cal…there are palm trees…) and he finds a quick sketch of himself fluttering in the pages of his book. The surfer is stretched out naked on his board in the picture, flawless.

The next time surf kid spots the artist he walks up to him and kisses him. Their bodies fit together perfectly, because it’s a fantasy, tanned skin against the cinnamon brown in a gloriously molded perfect moment. The kiss starts fast and furious and turns into gentle tastings before the artist asks the surfer if he’d like to come back to his loft. Cue up the techno fuck music that fades out to something cheesy and soft with clasped hands and sheet draped writing bodies in a cute little industrial décor loft with a rough brick wall behind the bed draped in crisp white sheets.

After I get to the sex I can’t turn off my brain. I build this whole story about their romance that changes every time I retell it to myself. Sometimes it’s bitter sweet. Sometimes it’s a hot porny thing without any plot at all. Occasionally it’s a story about how the kid’s family is famous and this relationship is just not okay. That one I’ve worked out a few different ways. But then, because I’m an incurable romantic, and most of the time by this point I’ve abandoned my main objective of private play time and I’m just lying there thinking, I end up planning the way they run off together and live poor but happy, or the surf kid’s parents realize they would rather have their son in their life and come to terms with everything. (Yeah, there’s angst in my fantasies. Go figure.)

I have other favorites-a battle hardened warrior mage who falls in love with a fellow soldier. (That one never ends well.) A bumbling, but well intentioned professor falls for his anger management counselor. (That one is potentially going to be a story one day. I can’t leave it alone.) I guess the point is my fantasies are never really fantasies, so much as small stories. My book Threefold Love started out as one of these little mind snippets-a soldier home from war who falls for a hot school teacher. Madness ensues. Okay, it’s more than that. The book has a polyamory theme, so really Xavier (the soldier) falls in love with Andrew (the teacher) and Andrew’s partner Duncan. It also has some fun paranormal elements as well. I always have a lot of fun drifting and letting my characters build their own world for me.

I slipped there calling my fantasies characters, but, well, in the mind of an author sometimes there isn’t much difference. I have fun with my insanity, and I hope you all do too! 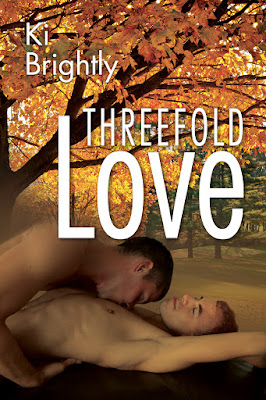 Captain Xavier Hobbs, a decommissioned combat engineer, was chronically lonely in the Army. But once he is back to being a civilian, with no family and nothing to ground him, he drifts. All he wants is a real home, a real life, and love—but that is easy to wish for and hard to make happen.

When he meets Andrew Landry, a high school English teacher, Xavier thinks he has found everything he has ever wanted, maybe even someone he can trust with his scars—the ones on his mind and body. Andrew’s quick wit and outgoing personality reel Xavier in slowly but surely. But he isn’t certain which way Andrew swings, and doesn’t dare to do more than hope the friendly man is actually flirting.

Then, on what Xavier idly wishes were their first date, disaster strikes in the form of Duncan McNeil, a fellow Wiccan and Andrew’s fiancé. Xavier’s hope is smashed to pieces, but Duncan and Andrew may have a different point of view. All they need is a little magic, some hope, and a lot of love to put everything back together.

Threefold Love is available in ebook or paperback from Dreamspinner Press.

Ki Brightly lives and works in Erie, PA. Ki takes on more projects than are probably healthy, beach bums during the summer months, and spends time with family whenever possible.