Tuesday Treat with Mickie B. Ashling

Many thanks to Cup o’ Porn for giving me an opportunity to share an excerpt of Chyna Doll.  This is the fourth novel in the Horizons series and we’ve moved ahead several years. Many of the characters in Chyna Doll are new to the series. There is also enough information on the original characters so that anyone who picks this up without having read the previous 3 books will be able to follow easily. Fans of the original characters won’t miss out as they weave in and out of this story. To celebrate my new release, I’ve brought along some goodies to give away, so stay tuned to see what you can win!

“Can’t sleep?” Grier asked, bringing Lil back to the present.

He turned toward the familiar voice and observed his life partner. He was leaning against the doorjamb with his arms crossed over his bare chest, dressed in nothing but low-slung pajama bottoms. His dark hair was tousled and a worried frown registered his concern. At thirty-three, Grier was far better looking than the hot number who had caught Lil’s attention almost eight years ago at the Taste of Chicago. That tattooed bad boy had been sweet but a little rough around the edges with a long list of hang-ups. This Grier was a man in his prime, a confident, stable, and amazing lover who still managed to set Lil on fire without even trying. Lil appraised the tight body on display and could honestly say he’d never seen anything as enticing. The tiny blue stars tattooed around Grier’s navel disappeared beneath the drawstring, and Lil had a sudden urge to tug on the cotton pants to admire the design in full.

“Did I wake you with my chattering?”

“I reached over to hug you and all I got was a pillow,” Grier pouted.

Grier ambled toward Lil and broke into a grin when he saw the look in Lil’s eyes. “What did you have in mind?” he asked huskily, straddling Lil in a face-to-face position.

“Now you’re talking.” He wiggled around to get comfy and observed Lil’s tenting robe. “I see we’re fully engaged.”

“I’d gladly sit on your cock, but I didn’t bring down the lube.”

“Did you ever see Last Tango in Paris?” Lil asked, drawing the white porcelain butter dish a little closer.

“There was one scene that had the censors in an uproar.”

“Why don’t I show you rather than tell.”

“Do it,” Grier said, eyes widening in anticipation. He lifted the cover off the dish and watched Lil intently.

“Take off your pants,” Lil ordered. Grier scooted back, shoved his pants down, and kicked them halfway across the room.

Grier climbed back on board, settling his naked bottom on Lil’s long legs, which he’d spread apart slightly. From this angle, Lil would have easy access to all of his partner’s dangly bits, starting with his pierced nipples that puckered in arousal. He skimmed over them with a light touch and moved down over the new tattoo that wound its way from Grier’s armpit to his thigh in a fiery dragon design. It complemented the colorful sleeve that had drawn Lil’s attention way back when. Lil picked up the soft brick of butter and squeezed, watching it ooze through his fingers in a creamy yellow mess. “Pull my robe apart,” he prompted, dangerously close to losing his shit before they’d even started. He was so hard it hurt.

Grier obeyed, trancelike. His breath stuttered into a low moan as he observed Lil coating his stiff cock with the slippery goop. “You look good in yellow,” he rasped, licking his lips in anticipation. His eyelids drooped slightly, but his gaze never wavered.

Lil was transfixed by the hunger radiating from the deep-set eyes. Grier’s visceral response was far more effective in alleviating Lil’s irrational fears than a handful of pills. It awakened his inner alpha, which had been pretty dormant lately, thanks to his glass-half-empty attitude. Although the partners switched without a problem, Grier loved bossy Lil, and thrummed with excitement whenever he showed up. Lil swiped some of the butter on Grier’s lips, glossing the soft pillows that parted at his touch.

“Kiss me,” he demanded, craving a taste. Grier bent down and brushed their lips, groaning loudly when Lil began lapping at the buttery corners of his mouth.

“What about your cholesterol levels?” 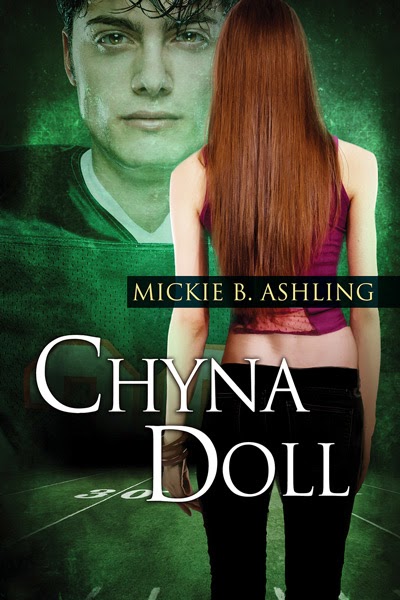 Chyna Doll
Lil Lampert’s forty-fifth birthday turns the effervescent architect into a brooding mess, and his partner, Grier Dilorio, takes him to Italy to help him regain his zest for life. The timing is bad—almost-fifteen-year-old Luca has just started high school, and his mother and stepfather are also traveling. Luca is left in the care of Chicago Bear, Clark Stevens, and his partner, Dr. Jody Williams.
Growing up with two dads and two gay uncles has given Luca a unique perspective on gender roles, but not all the answers. He’s had a secret crush on his straight best friend, Chip, for years. Suddenly, Luca finds himself attracted to Chyna, Chip’s twin sister. Now he's wondering if this means he’s bisexual.
Born with a sexual development disorder, Chyna should have been raised as a male, but due to an epic parenting fail, is being raised as female. Hiding the truth becomes more difficult when Chyna hits puberty, and crushing over Luca adds another element to Chyna’s struggle to fit in.
Is Luca's moral compass strong enough to guide him successfully through this period of discovery or will he succumb to peer pressure and shatter Chyna's dreams for happiness?

Mickie B. Ashling is the alter-ego of a multifaceted woman raised by a single mother who preferred reading over other forms of entertainment. She found a kindred spirit in her oldest child and encouraged her with a steady supply of dog-eared paperbacks. Romance was the preferred genre, and historical romances topped her favorites list.
By the time Mickie discovered her own talent for writing, real life had intruded, and the business of earning a living and raising four sons took priority. With the advent of e-publishing and the inevitable emptying nest, dreams were resurrected, and the storyteller was reborn.
She stumbled into the world of men who love men in 2002 and continues to draw inspiration from their ongoing struggle to find equality and happiness in this oftentimes skewed and intolerant world. Her award-winning novels have been called "gut wrenching, daring, and thought provoking." She admits to being an angst queen and making her men work damn hard for their happy endings.
Mickie loves to travel and has lived in the Philippines, Spain, and the Middle East but currently resides in a suburb outside Chicago.

Giveaway
Using Rafflecopter below, enter to win one of these prizes (contest open internationally): a $20 Dreamspinner gift certificate, one of five ecopies of Chyna Doll, any two ebooks from Mickie’s backlist, or a signed paperback of Chyna Doll. Must be 18 or older to enter. 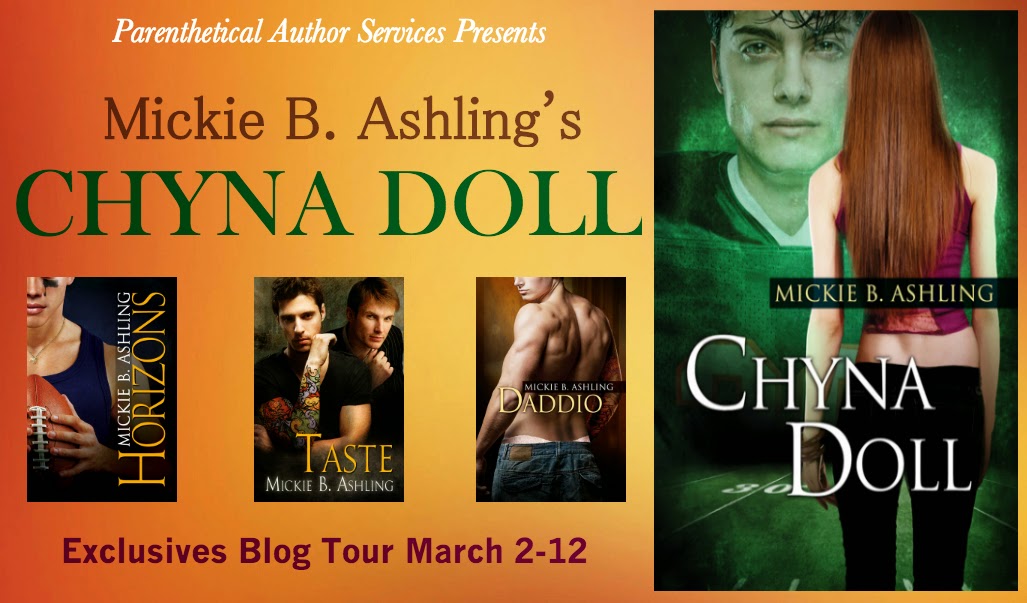