Have you met Irene Preston?  She's the author of the just-released A Taste of You and has dropped by for an interview with CoP.  And there's a link to a giveaway!  So, without further ado, please meet Irene...

1.  What's the first thing you want readers new to Irene Preston to know?

I’ve probably misled you in my blurbs somewhere. I promise I don’t mean to – I’m just really bad at describing what my stories are about.  In the blurb for A Taste of You, I fail to mention that Garrett is…quirky and difficult. Maybe you got that from “high-strung”?

2.  Do you have a daily writing routine or are you more of an "as it happens" writer?   One spot writer or a laptop traveller?   Music to inspire or quiet?

I’m a midnight writer. It’s not on purpose, I’m just a huge procrastinator – so if I have a daily word goal, that’s when it happens. I mostly write at home. Coffee shops and the like are for people-watching and I’m happiest writing when it is quiet.

3.  Have you ever had an inspiration that in retrospect surprised the heck out of you?

Everything I write surprises the heck out me. I’m not an outliner, but I still think I know where the book is going. It always winds up someplace different. Garrett’s “quirks” weren’t planned but I couldn’t seem to write them out. I complained about it the whole time I was writing the book. Whatever I’m writing, when I get to the end and look back I find there are things I didn’t anticipate. I can only hope my subconscious knows what it is doing.

4.  Judging by your blog, you are an enthusiastic foodie.  What's your favourite meal and do you have any recipes you're dying to share?

By foodie, do you mean I like to eat? Yes! My “favorite” meal tends to be whatever I’m eating at the moment. There are so many options – I could never pick just one. Our family has a lot of food traditions plus I like to try new things and experiment. I enjoy food-trucks to fine dining, so I’m versatile.  I’ve been asked for my gumbo recipe a lot – but I think I make it different every time.  If you want to see some of the food that inspired recipes for A Taste of You, I recently started a Pinterest board. Some of the pins have links to actual recipes – the one I tagged as Valentina’s brownies is one I use frequently.

5.  Have you seen anything on TV or the movie theatre lately that's made you go, "WOW!  YEAH!  AMAZING!"?

The episode of Vice on curing cancer. Bones has lost a lot of family members to cancer. Was that a little heavy? I was sad when I found out BBC isn’t picking up In the Flesh for another season. It was one of the more interesting zombie shows I’ve seen.  I’m not sure it was amazing, though.

6.  What are your hobbies, aside from the foodie?  What do you like to do to relax?

Gosh, this question makes me realize how boring I’ve been lately. I read a lot. I like to take my dog, Punkin Doodle, to the park for a run. I meet a group of writers monthly for happy hour.

7.  What is your dream vacation destination?

Ummm… see “favorite meal”? I’ve been fortunate travel a little bit. My husband, Bones, and I love to go to the . We’ve been to , , . After a bit of experimentation, we’ve found the best itinerary is front-loaded with me trying to cram a month of sight-seeing into whatever actual vacation time we have, and finishes with a few days on a beach to relax.  Machu Piccu is on my bucket list. I don’t think they have a beach, though.

Bones is an owl, so I have adapted to some extent. Midnight writer, remember? But I’m not truly an owl.

Cake. Although I have a really good apple pie recipe with rum raisins…maybe I’ll stick that on the blog sometime.

10. What would we be most surprised to know about Irene?

I’ve been arrested. And it wasn’t for drugs (for some reason that is always the guess). It was for being ornery. Maybe people who know me wouldn’t be so surprised by that after all.

Hey! While I’m here – I’d like to invite everyone to enter my giveaway for a $25 Amazon Gift Card.  Make sure and get your entry in by March 12! 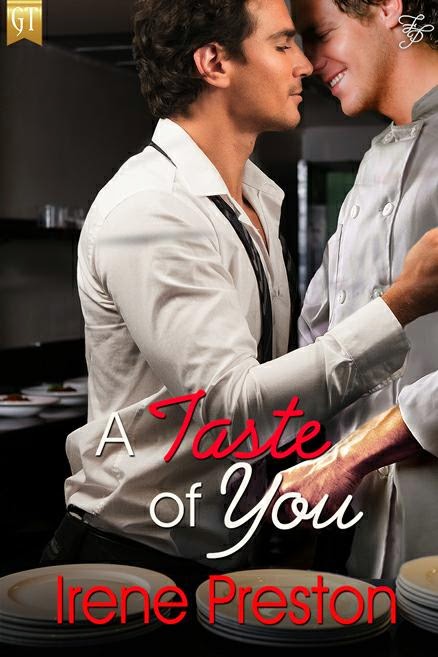 A TASTE OF YOU

Hell’s Kitchen has nothing on the flames Giancarlo and Garrett ignite at Restaurant Ransom...

Garrett Ransom is ’s hot chef du jour. He has a Michelin-starred restaurant in , a hit reality TV show, and a new man in his bed every week. Yes, he secretly thinks his business partner, Giancarlo “Carlo” Rotolo, is hotter than a ghost pepper, but he would never jeopardize their friendship with a fling. Then Garrett overhears some juicy gossip among the crew and realizes he’ll have to break Giancarlo’s cardinal rule, no banging the staff - for Carlo’s own good, of course. Just a taste of Carlo should be plenty. Long-term relationships aren’t on Garrett’s menu.

Giancarlo’s been in love with Garrett forever. He’s sure Garrett will eventually realize they are destined to be more than business partners. But when Garrett installs his latest boyfriend as their new chef d’cuisine and announces plans to leave Carlo in while he opens a second restaurant on the west coast, Carlo is forced to re-evaluate his life.

Can a high-strung British chef and a nice Italian boy from find the perfect fusion of fine-dining and family-style?

Excerpt from A TASTE OF YOU

No, of course Garrett wouldn’t make it easy. Carlo slugged down two glasses of water before turning around. He leaned back against the counter and tried to look relaxed, in charge, not a care in the world. This was his turf, damnit. He should have the advantage.

But he knew how he looked. He was standing in a pool of water and sweat. He had pit stains down to his knees. He was steaming. Literally steaming. Although, yes, he was still fuck-off pissed.

Garrett stood in front of him looking cooler than one of his citrus and champagne granitas. He looked totally lickable. He stood in Carlo’s kitchen as though he belonged there. As though he hadn’t just ripped his partner’s heart out and left him bleeding on the floor.

Hell. The goddamn saber-tooth was standing in front of him, and all Carlo wanted to do was step closer, bury his face in its neck, and let the scent of sugar and vanilla surround him while the damn thing eviscerated him.

Carlo did not want to lick him. He certainly didn’t want to bury his face in his neck and be seduced by that lie of a sweet scent. For the first time ever, Garrett was standing in his apartment and Carlo didn’t want to make love to him. He didn’t want to hold him close and beg him to stay.

He wanted to bend him over the nearest surface and bang some damn sense into him. Right. Fucking. Now.

Enjoy this taste? Read the full first chapter on IrenePreston.com

Or grab the full story at any of these locations:
Amazon | All Romance | Barnes and Noble | Kobo | iBooks | Google Play

About Irene:
Irene Preston has to write romances-after all, she's living one! As a starving college student, she met her dream man who whisked her away on a romantic honeymoon across . Today they live in the beautiful hill country outside of where Dream Man is still working hard to make sure she never has to take off her rose-colored glasses.

Irene loves to socialize. Stop by and say hello at any of her sites!