God, fucking A03. If you know the initials, you know what kind of time sucking, soul eating world lies beneath them. If you’re lucky enough to be sitting there guessing what they stand for, well, allow me to learn you something today.

I’m going to assume that you’ve read a few fics in your life. If you haven’t, well, you’re about to dive headfirst in a whole new world you can’t ever come back from and you’ll never be sure if you even want out. Fandom has a way of fixing every flaw, righting every wrong, rewriting every sour ending, bringing the dead back to life, and finally getting those two (or three...or more) together. We learned a long time ago to never fully trust a show runner to do that dirty work for us.

So you’ve discovered a new show or movie. After you’ve binged it until your brain is going to puke, you inevitably end up...at the archive. Maybe you googled your pairing and that’s how you discovered AO3. Maybe Tumblr told you about it. Maybe you’re an old pro with a hundred fics there already. Somehow, like a fandom lighthouse in a storm of disorganized Livejournal comms, the ruins of what ff.net once was, and the unholy amount of One Direction fics stinking up Wattpad and other late startups*, the archive calls to you.

*on that note, someone please explain the rise of the “imagine” fics where the story is in second person and *you* are having twins with Harry and the writer has so helpfully also put together a Polyvore collage of “coming home from the hospital” outfits that are, laughably, a size 00. Someone please explain this to me or at least explain to these precious darlings that they have about as much of a chance of coming home from the hospital after having twins wearing size 00 low rise skinny jeans as they do actually getting Harry to father those twins.

You find yourself thinking, “Oh, I wonder if anyone has written Loki/Tony Stark?” (They have) “I bet no one ever wrote Bob Jenkins/Craig Toomey from that 1995 made for tv miniseries of Stephen King’s The Langoliers.” (No, thank God) “Peggy Carter dominating Jarvis while Howard Stark watches in the corner as he gets head from Thompson?” (Probably. Let me know if you find that)

And if you find what you’re looking for, it’s time to filter and read. Some people just go down the list. Some people filter by hits or kudos. But you read voraciously, maybe only skipping the coffee shop AUs and fic that looks like it was written a 12 year old (the tags, you see. The tags give it away. You’ll soon learn).

And then? You happen upon the fic. Oh, everything up until now has been formulaic and safe. Not bad. Just...typical.

A fic only deserves italics if it’s the one that makes you go cross-eyed and shift uncomfortably in your chair. The fic that makes you question your entire existence and sexual history because (insert kink spelled out in graphic detail in the fic here) has never crossed your mind before this moment and you’re not quite sure if you could even pull it off in real life, but just the thought of it makes your skin hot. And you’re pretty sure that there is something inherently wrong with you for thinking that said new kink is hot because it’s just so dirty, but you can’t stop thinking about it.

You know how when you have a sex dream of someone and, if the sex was good, you can’t help but think of that person for the next day? No matter if you actually like the person in real life. You wake up with the realization that you and (insert person here. I’ll go with that time that Dr. Cox from Scrubs and I did the nasty) had dirty, kinky, amazing sex in your dream and it dominates your thoughts for awhile afterwards. Even years later, when that person (Dr. Cox) pops up somewhere, you still have that fleeting moment of flashes of O face. It’s kind of like that. You’ll always wonder what hitting that in real life would be like.

And so it goes with the fic and all of a sudden you find yourself in the middle of the grocery store thinking about really dirty sex on a coroner’s slab with the coroner when you might have just been playing dead or with a priest who is questioning his devotion to the cloth. Or maybe it’s something not so out there but is still something you’ve never considered before, like giving head to a near stranger in a club bathroom, but it doesn’t really matter because now you’re in it, you’re spiralling downward into the depths of the archive and there’s no coming back from it once you’ve encountered the fic.

And because these are fics of established characters with faces you know, you can’t help but imagine them when you’re standing in line at the Publix deli waiting for your mac and cheese and you’re like, “how did it come to this? How is this my life?”

But you know you’re not going to stop, either. The good lord gave us phones and tablets and the ability to download and by GOD, if you have a spare five while you’re in the bathroom, riding the train to work, taking the kids to the park, standing in line at the DMV, doing the elliptical at the gym, you’re going to use that time wisely.

Had enough of Torchwood’s Jack/Ianto/Owen and any combination of the three? How about PC Andy/Rhys playing out their own version of what Gwen and Owen did against the tree in Countrycide? Why not. Fuck it. I’m reading it.

Burnt out on Stiles and Derek? Gimme some Greenberg/Coach Finstock acting out their own sexy version of The Princess Bride. Who cares if we’ve never even seen Greenberg. That shit’s hot.

And then one day...the worst happens. A fandom grows long in the tooth and every new fic is a new disappointment. It’s all grossly OOC AUs, fics with 300 pairings and multiple fandoms with a tag list longer than the work itself, and kink that belongs alongside Two Girls, One Cup (assuming you’re not into that). The quality of writing goes down because everything has been done now and the only people trying to claim they have an original idea are newbie writers who haven’t searched to see if their idea has been done (it has, and better) or that original idea is so fucking out there you’re pretty sure the FBI is going to knock on your door for even letting the title scroll down your screen (I’m looking at you, Supernatural kink meme. It’s become almost a fandom hazing to tell newbies to see how much time they can spend in there without running away screaming. Seriously, some of you need to go to church). Your favorite writers have moved on and your own fics are so far buried down in the timeline view that your only hope of people seeing them is if you’re on a reclist or if your work has a lot of hits or kudos to be near the top of the filter.

Oh, sure, you’ve bookmarked your favorites and go back to them now and again, but the thrill is gone. You had something special once and it’s hard to get that back after a fandom goes down.

But you also miss the really good, kinky stuff you discovered there. Maybe it made your actual sex life better. Maybe you experimented with stuff you read about and used it in real life and it was totally awesome. Maybe it made you really explore yourself for the first time and figure out what you like and don’t like. Maybe fantasizing helped you achieve your first really big orgasm. Maybe it helped you come out of your shell a bit in other areas of your life by pretending to take on the traits of a character because you liked the way he or she was written in that one gen fic you read to see if you could actually read gen fic and not long for the sex (you can’t, but that one was a really good gen fic).

And then...you’re sitting down to watch some tv or you go see a movie and about halfway through that little voice in your head that’s been quiet for awhile finally speaks up.

“I wonder if there’s fic of these guys?”

And after it’s over, away to the archive you ride. But now you’re an expert. You’ve got this. You know how to tell the good from the bad just looking at the description on the main page. You’re subscribing to familiar names to weed them out from the oncoming glut of fics. You’ve streamlined everything. You’re a god damned efficient fic reader now. You have NOT COFFEE SHOP AU and NOT ALWAYS A GIRL saved as a fucking macro when you go searching.

You know how it all ends, but you do it anyway. Because your next dirty kink could be lying in wait in the pages of the AO3. 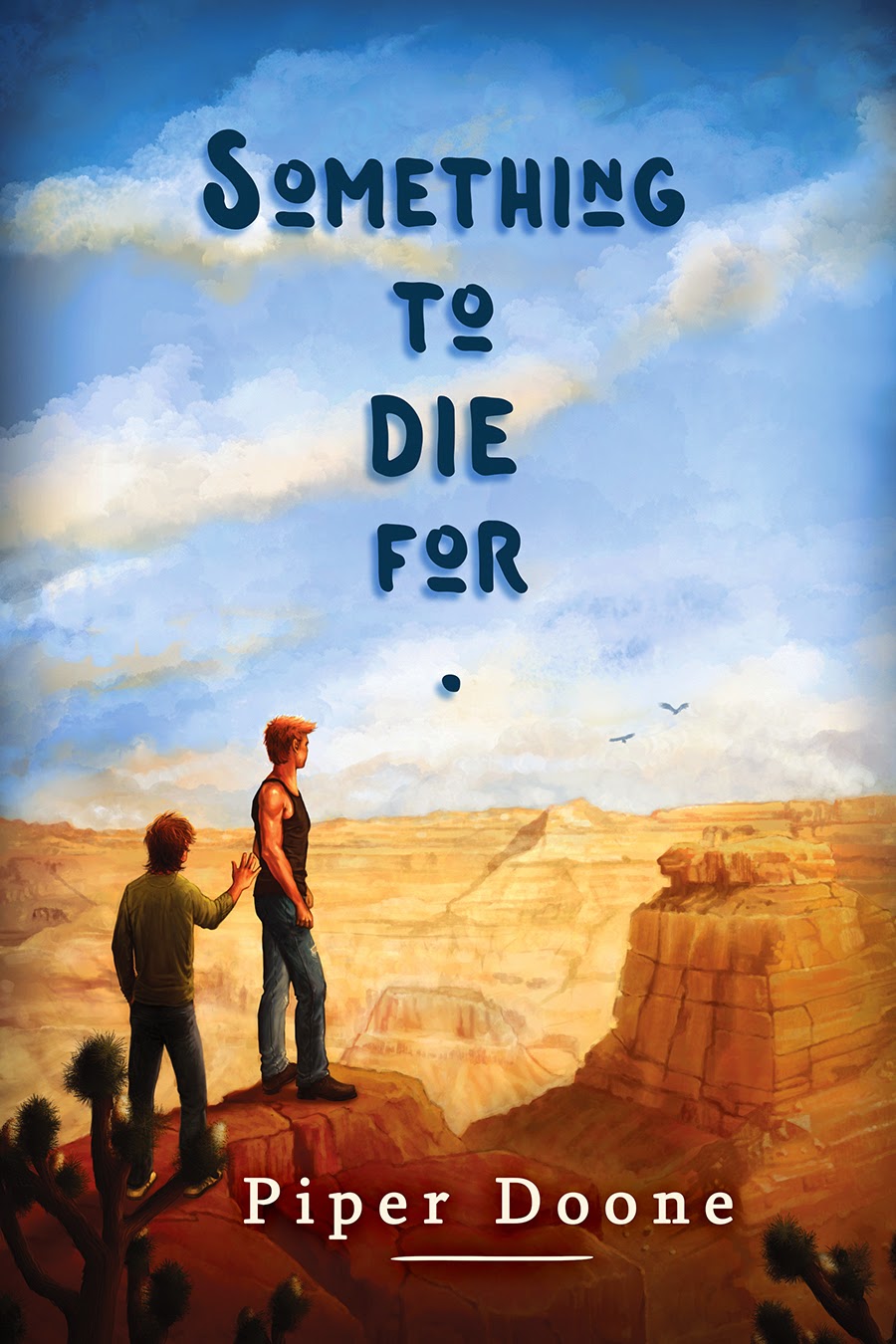 Something To Die For

Josh Tucker lives a blessed life—great job, great family, perfect husband, and two wonderful children—but a mysterious man named Adam who haunts his dreams and soon his waking life threatens everything when he stirs doubt as to whether any of it is real. Adam makes Josh question the world he’s taken for granted—as well as the origins of Adam himself.


Even if Adam's claims are true, Josh has nothing to live for beyond his fabricated life—except the possibility of a real man out there somewhere who can love him. Josh is left with an impossible choice: stay in his delusion where he's assured some happiness or take a great leap of faith for a chance to make a life with Adam.

Piper Doone is the author of Playing Hard to Forget and the upcoming Something To Die For, out March 18, both from Dreamspinner Press. You can buy them by clicking the links above or on Amazon.

She’s currently obsessed with finding good Harvey Bullock/literally anyone fic because of her raging ladyboner for Donal Logue on Gotham. She might even take one of those “imagine” fics if she gets desperate enough.