Hi! We’re Lisa Henry and J.A. Rock, the authors of The Merchant of Death. We’re touring the web taking about our influences, our processes, anything we can think about actually, and even giving you guys a sneak peak or two! And what would a blog tour be without a contest? Check out the details at the bottom of the post to see what you can win!

Today’s post is all about Henry’s BFF Remy. We first met Remy in The Two Gentlemen of Altona, when he helped Henry out with a disguise. In The Merchant of Death, we learn a lot more about what makes Remy, and Henry, tick.

In our Playing the Fool series, MC Henry’s best friend is fellow con artist Remy Greig. Remy specializes in short cons, the street corner stuff: things like three card monte and the shell game. Remy is the guy who taught Henry card and coin tricks, back when they were turning different sorts of tricks on the streets of Indianapolis.

Henry often turns to Remy in a crisis. In The Two Gentlemen of Altona, when Henry’s running from the FBI and needs a makeover, Remy’s the guy he calls. Remy turns up at a cheap motel with a change of clothes, a box of hair dye, and a bag of cosmetics.

Remy is the only guy in the world who can get away with calling Henry “babe”. They have a history, but it’s mostly been a friends with benefits arrangement. There aren’t many people that either of them can let their guard down for, but Henry and Remy don’t have secrets from each other.

When Henry gets tangled up with the FBI, and with Mac, Remy’s not pleased about it. He doesn’t trust the law, and, as we find out in The Merchant of Death, he’s got his own reasons for being unhappy about Henry’s burgeoning relationship with Mac. But when it comes down to it, Henry is his best friend and Remy will to help him in any way he can. 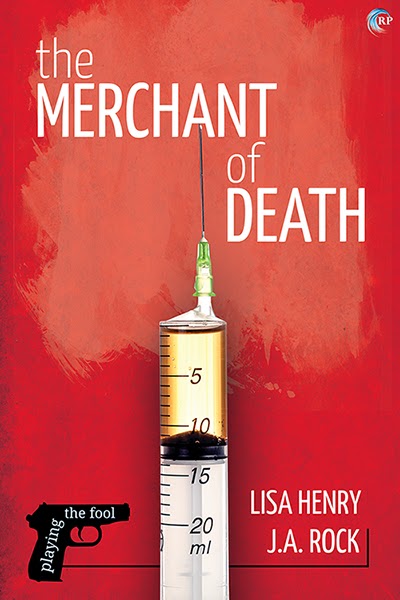 The Merchant of Death

All’s fair in love and war.

There’s something rotten in the state of Indiana. When con man Henry Page takes it upon himself to investigate the death of an elderly patient at a care facility, he does so in true Shakespearean tradition: dressed as a girl.

FBI Agent Ryan “Mac” McGuinness has more to worry about than Henry’s latest crazy idea. Someone is trying to send him a message—via a corpse with a couple of bullets in it. He needs to figure out who’s trying to set him up before he gets arrested, and he really doesn’t have time for Henry’s shenanigans. Then again, he’d probably be able to focus better if Henry didn’t look so damn distracting in a babydoll dress and a wig.

But when Mac discovers that Henry has been keeping a secret that connects the cases, he has to find a way to live on the right side of the law when he just might be in love with the wrong sort of man.

The Merchant of Death is available at Riptide Publishing.

Lisa Henry likes to tell stories, mostly with hot guys and happily ever afters.
Lisa lives in tropical North Queensland, Australia. She doesn’t know why, because she hates the heat, but she suspects she’s too lazy to move. She spends half her time slaving away as a government minion, and the other half plotting her escape.
She attended university at sixteen, not because she was a child prodigy or anything, but because of a mix-up between international school systems early in life. She studied History and English, neither of them very thoroughly.
She shares her house a log-suffering partner, too many cats, a dog, a green tree frog that swims in the toilet, and as many possums as can break in every night. This is not how she imagined life as a grown-up.

Thanks for following our tour! To celebrate our release, we’re giving away an awesome prize – an ebook copy of a novel of your choice from either of our back catalogs. We’re also giving away a $20 Riptide gift voucher, and Mac’s favorite coffee mug. What? It’s not like he’s supposed to be drinking coffee.

All you have to do is leave a comment on this post with a way for us to contact you, be it your email, your twitter, or a link to your facebook or goodreads account. Please put your email in the body of the comment, not just in email section of the comment form, because we won’t be able to see it otherwise! On February 12, 2015, we’ll draw a winner from all eligible comments!

Be sure to follow the whole tour, because the more comments you leave, the more chances you have to win the prize!