Hi there. I’m Jeremy Linden, here to talk about my dreams. You may already know me from the cover of Dirty Dining. (I have been getting a lot more attention than I ever expected from that cover. I just hope my mom doesn’t see it, or worse, read it!).

Kit, one of the guys I work with at the Dinner Club, wonders what I expected would happen. Since our job is to serve the members dinner and take off one piece of clothing with each course. You have no idea how goddamned sexy it is to work there. The atmosphere is just electric. Why wouldn’t I expect that what happened at the club stayed at the club? But I’m getting ahead of myself.

I’m a PhD student at UC Berkeley, so I know a lot about dreams. It takes sticking to your dream to make it through six or seven years of college and grad school, especially in my field of microbiology.

As a kid I wanted to be a doctor. I probably wanted to be Doogie Howser, but maybe not start practicing medicine that young. It’s tough to get laid if you haven’t hit puberty yet. As soon as I could take life science or biology classes I signed for everything I could during junior high and high school. One year I did a science fair project about vaccines, and then my dream changed.

I realized that as a doctor, I could help only a certain number of people in my career. But if I helped create a vaccine or a cure for a disease that a lot of people caught, I would be able to help so many more people. I loved the idea of helping people NOT get sick, rather than only treating them once they had a disease.

Of course as a gay kid, I was extra-aware of safe sex practices and was scared shitless over the prospect of getting HIV. Not all kids my age were. So many just took for granted the available meds to manage the disease. But people around the world (not just in our community) were still contracting and dying from HIV/AIDS.

That’s what made me decide to want to pursue research to help discover an HIV vaccine.
I’ve already failed at making a long story short, but bear with me, please.

For the past three years I’ve been doing really cutting-edge research on vaccine delivery systems. I got an amazing fellowship funded by a Silicon Valley biotech firm that thought my research was the missing link in making their vaccine work.

To top that all off, I met this amazing guy, Brice. Well, I didn’t know his name was Brice right away. He was Mr. Green to me, because he’s a member of the men’s club where I recently started working to earn a little extra money, so I could eat after I paid my rent. Berkeley’s expensive, even for students. If you’ve taken any chemistry, you’ll stop thinking of Top Ramen as food, and realize it’s just a lab experiment.

Just thinking about him gets me distracted and so excited everyone can see. I’ve only just started seeing him outside the club and I think I’m falling in love. I’ve never been in love. I thought I was, but after I met Brice, I realized that wasn’t love. As much as I want to get Brice out of his clothes, I also really enjoy stuff we do when we’re both dressed.

Since I met him, everything was falling into place in my life.

Or so we all thought.

It’s one of life’s ironies that when one thing goes well, another thing gets really fucked up.

The problem with our research is that it’s pretty expense. And the problem with Silicon Valley is that money always comes into the picture. Profits. So when we didn’t have a product ready to start trials, funding got scaled back, making it even less likely we’d be able to make progress as quickly as they wanted.

I just don’t get how that venture capital company can put profits ahead of the lives of millions of people. I’m kind of naïve like that. I used to sit up in my lab unaware of these issues, until reality came through the door and slapped me in the face. Hard.

Now my funding and my dreams are circling the drain.

I was shocked, outraged, shocked, angry, and still pretty shocked.

I didn’t even care about finishing my PhD. I just wanted to keep going with my research.

Brice happens to work for a venture capital firm, and I’m hoping he can give me some advice.

And wouldn’t you know, that’s when the trouble really started. 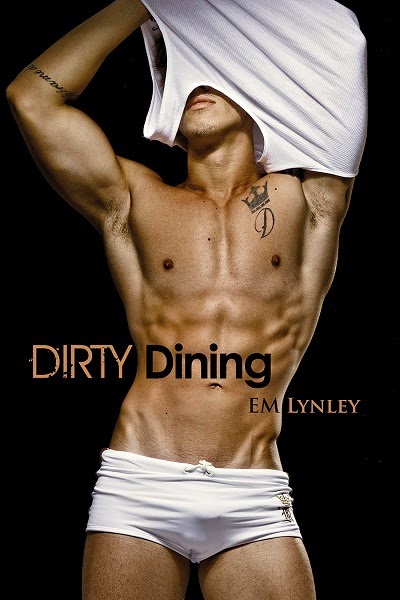 Jeremy Linden’s a PhD student researching an HIV vaccine. He’s always short of money, and when biotech startup PharmaTek reduces funding for his fellowship, he’s tempted to take a job at a men’s dining club as a serving boy. The uniforms are skimpy, and he’s expected to remove an item of clothing after each course. He can handle that, but he soon discovers there’s more on the menu here than fine cuisine. How far will he go to pay his tuition, and will money get in the way when he realizes he’s interested in more from one of his gentlemen?

Brice Martin is an attorney for a Silicon Valley venture capital firm. When he’s asked to take a client to the infamous Dinner Club, he finds himself unexpectedly turned on by the atmosphere and especially by his server, Remy. He senses there’s more to the sexy young man than meets the eye. The paradox fascinates him, and he can’t get enough of Remy.

Their relationship quickly extends beyond the club and sex. But the trust and affection they’ve worked to achieve may crumble when Jeremy discovers Brice’s VC firm is the one that pulled the plug on PharmaTek—and Jeremy’s research grant. 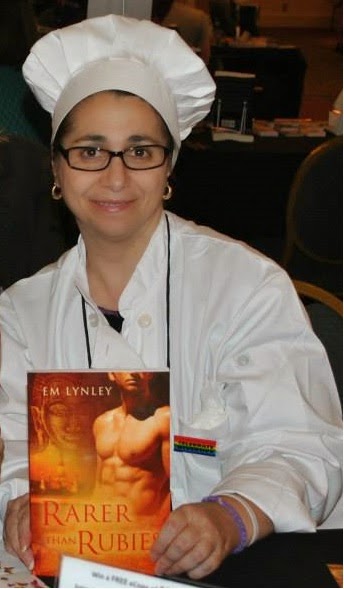 EM Lynley writes gay erotic romance. She loves books where the hero gets the guy and the loving is 11 on a scale of 10. A Rainbow Award winner and EPIC finalist, EM has worked in high finance, high tech, and in the wine industry, though she'd rather be writing hot, romantic man-on-man action. She spent 10 years as an economist and financial analyst, including a year as a White House Staff Economist, but only because all the intern positions were filled. Tired of boring herself and others with dry business reports and articles, her creative muse is back and naughtier than ever. She has lived and worked in London, Tokyo and Washington, D.C., but the San Francisco Bay Area is home for now.

She is the author of Sex, Lies & Wedding Bells, the Precious Gems series from Dreamspinner Press, and the Rewriting History series starring a sexy jewel thief, among others.