Today is Monday and with us we have author Charlie Cochrane who is here to give us some insight into her Cambridge Fellows series and its latest episode, Lessons for Survivors.  (There's a blog tour giveaway too!)

What inspired this series?

The Cambridge Fellows started life when I couldn't find any classic age mysteries which featured a pair of gay detectives, no matter how much I yearned to read one. I’m a huge fan of Christie, Sayers, Innes and the like and would have loved to plough through the equivalent of Lord Peter Wimsey and “Harry” Vane. I had to take the extreme course of writing my own. That first book, Lessons in Love, spawned a whole series of which Lessons for Survivors is the ninth. The stories so far span 1905 to 1919; Jonty and Orlando have developed quite a following, although I daren't tell them or they'll get big headed!

BTW I have subsequently discovered AA Milne’s (yes, the Winnie the Pooh man) “The Red House Mystery” which features an incredibly slashy pair of detectives, but alas that’s the only one he wrote.

What inspired this particular episode?

Lessons for Survivors came out of my fascination with WWI, especially the war poetry of Wilfred Owen and the recollections of servicemen; it's set in 1919 and reflects the readjustments returning soldiers had to make. The whole series is inspired not just by my love of cosy mysteries, but by my interest in puzzles, riddles and word games, which has fed into the mystery part.

And, of course, my muses for Jonty (Jamie Bamber) and Orlando (a cross between Benedict Cumberbatch and a young Michael Kitchen) kept "nagging me" until the story was written. It's funny how some characters really get into their author's head and insist on having their adventures described. The little so and so's are always trying to get me to write another tale about them!

Do you write any other mysteries?

I do, no matter how much my muses insist I only write about them. Riptide published my first contemporary cosy, The Best Corpse for the Job, last November – think Midsomer Murders with a dash of slash. It’s a bit different from the Cambridge series, not just in terms of when and where it’s set. Robin Bright is a professional policeman, who falls for one of the witnesses (or is he a suspect?) in a murder case. All turns out happily in the end, of course, and now I’m playing around with another Adam and Matthew story. Just as soon as they tell me “whodunit” I can get on with the tale. 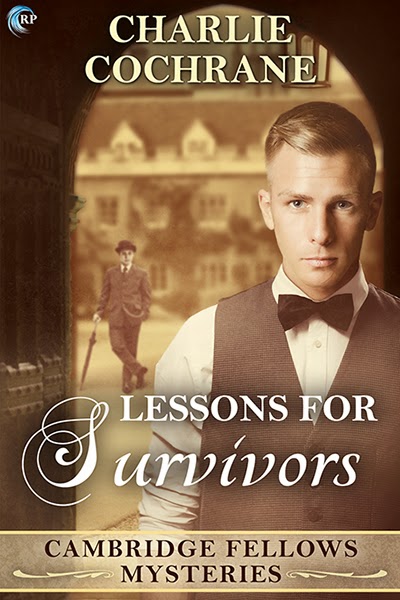 A more than professional interest . . . a more than personal intrigue.

Orlando Coppersmith should be happy. WWI is almost a year in the past, he’s back at St. Bride’s College in Cambridge, his lover and best friend Jonty Stewart is at his side again, and—to top it all—he’s about to be made Forster Professor of Applied Mathematics. And although he and Jonty have precious little time for an investigative commission, they can’t resist a suspected murder case that must be solved in a month so a clergyman can claim his rightful inheritance.

But the courses of scholarship, true love, and amateur detecting never did run smooth. Orlando’s inaugural lecture proves almost impossible to write. A plagiarism case he’s adjudicating on turns nasty with a threat of blackmail against him and Jonty. And the murder investigation turns up too many leads and too little hard evidence.

Orlando and Jonty may be facing their first failure as amateur detectives, and the ruin of their professional and private reputations. Brains, brawn, the pleasures of the double bed—they’ll need them all to lay their problems to rest.

As Charlie Cochrane couldn't be trusted to do any of her jobs of choice—like managing a rugby team—she writes, with titles published by Carina, Samhain, Bold Strokes, MLR and Cheyenne.

Charlie's Cambridge Fellows Series of Edwardian romantic mysteries was instrumental in her being named Author of the Year 2009 by the review site Speak Its Name. She’s a member of the Romantic Novelists’ Association, Mystery People, International Thriller Writers Inc and is on the organising team for UK Meet for readers/writers of GLBT fiction. She regularly appears with The Deadly Dames.

Every comment on this blog tour enters you in a drawing for an e-book from Charlie Cochrane’s backlist (excepting Lessons For Survivors). Entries close at midnight, Eastern time, on January 31. Contest is NOT restricted to U.S. entries.