I have a hard time remembering dreams I love.  I tend to wake up from a great one and think “Wow! That was so cool!”, then forget it immediately.  Unfortunately, not so with nightmares. I had a horrible dream when I was little.  The local McDonald’s decorated their store with circus themed paper.  Overly jovial clowns, bearded ladies, oddly proportioned people… super strange things you’d never encounter in a McDs today (unless they were real people, that is J.  And now, I think it was kind of cool.  Minus the clowns.).  I didn’t think anything of it but that same night, I dreamed about a creepy clown pulling my pigtails hard. Naturally, I woke up screaming.  I think that one stupid dream skewed my vision of clowns from that day forward.  It was so scary to me!


The topic of dreams is an interesting one.  In The Right Words, Luke wakes up from a nightmare he knows is directly related to specific fears he can’t shake.  Fears from the past, fear of the unknowable future and the dreaded feeling of wallowing in what you can’t control in the present.  We’ve all been there to some degree.  I love the idea that the brain processes our day while we rest.  A sort of hyper-sensitive computer that knows to file away crappy things we shouldn’t worry about and gently reminds us to find whimsy and humor in everyday occurrences.  But there are times, such as in Luke’s case, where life seems larger than we can handle and it’s difficult to quiet our minds and think positively.

The human mind and spirit is a fascinating one.  How fortunate we are to have the immense capacity for imaginative dreams.  They serve as a window of sorts into our psyche and well being.  In The Right Words, Luke knows he’s on the right path.  He simply hopes to find solace in waking moments with the man of his dreams.  One who knows the right words. J 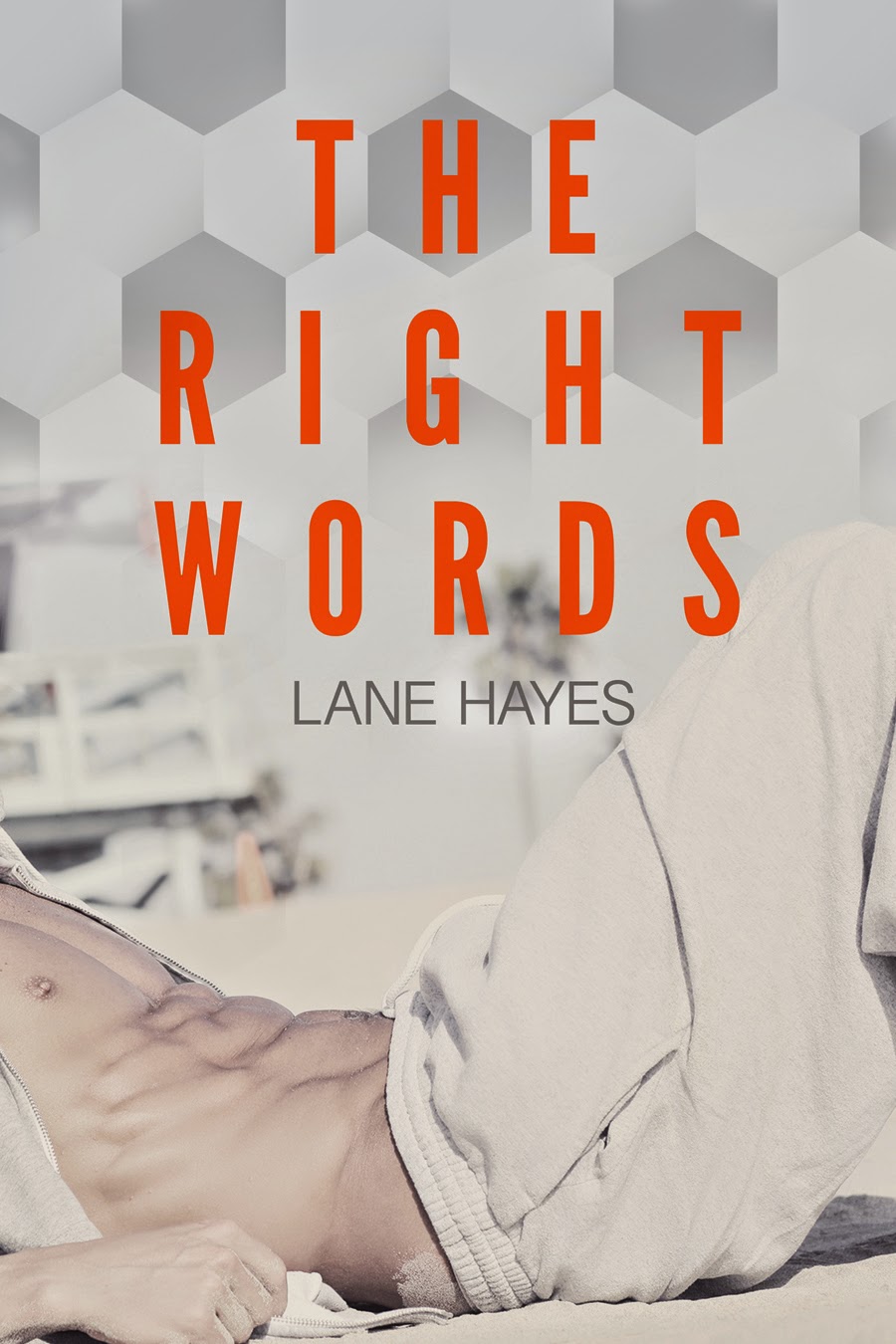 Escaping an abusive relationship left Luke Preston anxious and spouting panic-induced poetry. Desperate for a fresh start, Luke accepts a job remodeling a tired old beach house for a professional soccer player and his model girlfriend. While his passion is literature, not sports, focusing on the renovations eases his anxiety. Until the job he signed up for turns out to be more complicated than advertised.

Sidelined with a serious injury, soccer star Michael Martinez decides his beach house is the perfect place to recuperate. Remodeling might be the diversion he needs to keep his mind off his busted knee. Falling for the pretty designer with some quirky habits wasn’t on the drawing board. Unfortunately, Luke didn’t build a big enough closet for Michael to hide in. Having a star-powered sports career used to be all Michael lived for, but he’ll have to reevaluate his plans and find the right words if he wants to build more than a beach house with Luke.

Lane Hayes is grateful to finally be doing what she loves best. Writing full time! It’s no secret Lane loves a good romance novel. An avid reader from an early age, she has always been drawn to a well-told love story with beautifully written characters. These days she prefers the leading roles both be men! Lane discovered the M/M genre a fews ago and was instantly hooked. Her first novel was a finalist in the 2013 Rainbow Awards and her third received an Honorable Mention in the 2014 Rainbow Awards. She loves travel, chocolate, and wine (in no particular order). Lane lives in Southern California with her amazing husband and the coolest yellow lab ever in an almost empty nest.

Excerpt from The Right Words by Lane Hayes:

I navigated the darkened overgrown pathway toward the side of the main house with care. It was damn near jungle-like in certain areas. I was engaged in a full conversation with myself regarding an outdoor to-do list when I heard a noise. I stopped dead in my tracks. My heart started pounding and my palms felt instantly clammy. God, I was ridiculous! Or was I? What if Jamie came back to kill Michael in his sleep? What if he— That didn’t make sense, though. He wanted money and a dead man couldn’t pay him. Dead. Oh fuck. Why couldn’t I take a simple walk in the dark without freaking out? It was probably some kind of nocturnal animal, like a rabbit or maybe a raccoon. I didn’t even know if there were raccoons this close to the ocean. I willed my breathing to slow so I could concentrate.

There it was again. A moan.

Oh my God! Was someone injured? Was it Michael? Was Jovan the Gorgeous really Jovan the Terrible? Was he in cahoots with Jamie? Had he done something to Michael and left him bleeding, helpless, and hopeless? I felt my cool slip and spiral away. My flair for melodrama was being tested for sure. I listened and once again heard the moaning noise. But this time I recognized it.

I felt a fit of inappropriate laughter bubble up as I heard the unmistakable sound of lovemaking in progress. A soft gasp, a low groan. Not my business, but I was suddenly in a sticky situation. It was so damn dark and the foliage was so dense, I was sure to give myself away if I moved too quickly. I needed to let my eyes acclimate and then find the quietest way back to the studio. I silently reprimanded myself. I should have just driven back. Now I was forced to hear sex in progress. I could have stayed at Brandon’s for that. I could hear whispers and an almost-pained-sounding grunt before I heard the first urgent request for more.

“You like that? You ready for me? You want it hard? Tell me.”

I stood like a deer in headlights at the bottom of the steps near the garage attempting to clear my head. Trying to go to sleep now was a joke. Just picturing my handsome client with the tall, hunky Jovan was enough to make me hard. Darker skin on lighter skin and… shit. I reached down to cup my swollen flesh through my khaki pants. This had to be one of the strangest situations I’d ever found myself in. I was confused but wildly turned-on from accidentally eavesdropping on two guys watching two guys have sex. What the hell was wrong with me?