Kraft Foods introduced the slogan in the title in 1964 to bolster declining sales of their gelatin dessert mix. It didn’t work, so the company tried giving away Jell-O cookbooks, running massive marketing campaigns—anything they could think of. Nada, no-go, goose egg. But they did turn things around. In 1966 they hired someone famous to say the line. Once Americans heard it from Bill Cosby, Jell-O became cool again.

One Thing Leads is a dark tale of lovers broken apart by a devious, oversexed playboy with designs on one of them. Grayson—the playboy—wants Dion for his harem. He flirts his way between Dion and his partner, Kenji, and is delighted when their relationship blows up over his advances. Kenji storms out of town to cool down, and Grayson makes his moves on Dion, slowly leading him away from the life he wanted with Kenji. One day Dion snaps awake to the realization that he’s traveled much too far down a dangerous road. Grayson has engineered blackmail on Dion that he uses to coerce him into working as a gay prostitute at Grayson’s sex club.

Oh, that. Bill Cosby’s immortal words are based on a simple premise most North Americans accept as basic truth: More Is Better. Yes, it’s fashionable these days to denounce it via the Minimalist Life movement, but in so much of our lives we assume that, regardless of how heavy the meal we just ate, “There’s always room for Jell-O.” “One drink makes me feel good, so another will make me feel better, right?” We apply this principle to everything from the “need” for bigger phones and faster Wi-Fi to longer vacations at more exclusive destinations and—and—

Now if you thought my next line would be that One Thing Leads is about what happens when “there’s always room for more” is applied to sex, then think again. It might seem so on the surface, because there’s plenty of hot and heavy action in the story beginning right in chapter one and carrying through to the scenes in the sex club that Grayson lures Dion to. And Grayson certainly seems to count on the idea that his customers don’t think the old adage “too much of a good thing” applies to sex. But this isn’t what leads Dion down Grayson’s destructive path.

Dion wants his lover back. The fight that breaks them up is over Grayson’s outrageous flirting at dinner one night, and it happens because neither Dion nor Kenji knows how to confess his feelings. “What if he thinks I don’t trust him?” “How would he react if I told him I was turned on?” “Will he believe me if I tell him I want him, not Grayson?” It’s the stuff of scenes in classic books and movies that show misunderstandings between lovers arising from self-doubt and low self-esteem.

No, what Dion wants more and more of is assurance that he’s loved. Kenji’s departure leaves a vacuum Grayson is more than willing to rush in and fill. Dion can’t get enough of his “friend’s” comfort, mostly because it’s a piss-poor substitute for what he really wants: to be affirmed and cherished by the man he loves.

One Thing Leads is a three-layer cake. On top is Grayson’s butter-cream seduction of Dion; in the middle is Kenji’s struggle to find Dion and save their relationship; and supporting both of these is a subtle examination of what triggers our first step down a path we might not have chosen if our pain hadn’t clouded our vision of where that road could lead.

If you like your action fast, your men hot, and your love stories real, then One Thing Leads is a must-read. Trust me, I know. I wrote it. ^_^

Below you’ll find a short bio of yours truly, and the requisite excerpt, freebies, and “buy me!” linkage. Click and enjoy. After all, there’s always room for one more delicious read, right? 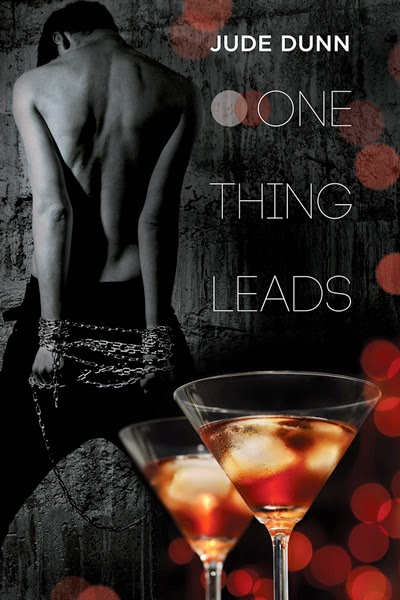 What makes a young man go further than he ever thought he would?

Dion Bellamy is twenty-seven and studying social work at the University of Chicago. He has lived with Kenji Okamura, a construction worker, for a year and a half. Dion loves Kenji and passionately hopes Kenji feels the same, but he has never said the three big words. Then Grayson Sinclair, Dion’s schoolmate and a vivacious, oversexed playboy, comes between them.

One step at a time, barely aware where his steps are leading, Dion descends the slippery slope into a life of depravity. First, Grayson ensures Kenji is out of the way. Then he entices Dion to go clubbing with him, gets Dion drunk and high, and then takes him to a sex club, where he films Dion giving blow jobs to multiple men. He threatens to put the video online unless Dion signs a contract to work as a prostitute. Though he hardly understands how he reached this point, Dion must now figure out how to escape his fate and save himself.

I’m a southern boy who lives in Chicago and enjoys fine wine, dark chocolate, and plays jazz piano from time to time. Most of all, I love writing gay romance and erotica that will touch your heart and make you laugh.

One Thing Leads is available from Dreampsinner Press

More info about One Thing Leads

Read a chapter for free.

Pick up a free PDF or two of my unpublished stories.