Hi, everyone, thanks for having me on this tour for Gabriel's City! Don't forget to leave a comment at the end of this post to win a chance at the ZOMG Smells giveaway!

Spoiled young aristocrat Colin Harwood has always enjoyed flirting with danger, but he’s always been able to retreat to safety—until bad decisions and a chance encounter plunge him into a world far more savage than his own. Gabriel is an urban legend, famous in the underworld for his unpredictability and violence. He’s also a believer fairy tales, and quick to decide to the handsome stranger who came to his aid must be good luck. With few other options remaining, Colin will need to keep his wits about him to learn to survive in Gabriel’s City. 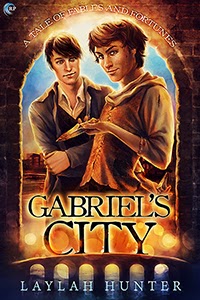 For spoiled young aristocrat Colin Harwood, the port city of Casmile is a buffet of easy pleasures. But when he steps into a pub brawl to help a dangerously outnumbered young man, he is drawn into the seedy underbelly of the city the young man calls home.

Gabriel is a cutpurse and a knife for hire, practically an urban legend. His vision of Casmile is touched by a strange combination of faith and madness, driven by fairytale logic and a capacity for love that he often must suppress to survive. He’s always worked alone, but when a dashing dragon who calls himself Colin saves him in a bar fight, he pulls Colin into his world.

Gabriel’s city is nothing like the refined, socialite existence that bored Colin senseless. Colin finds adventure and excitement there—and maybe even love. But with his layers of finery stripped away, nothing remains to protect him from poverty or danger—except Gabriel. So he must choose: go back to the civilized young man he once was, or fly free as Gabriel’s dragon.

Hir mild-mannered alter ego lives in Seattle, at the mercy of the requisite cats and cultivating the requisite caffeine habit, and dreams of a day when telling stories will pay all the bills.

Giveaway! I have the good fortune to be friends with the charming people who run ZOMG Smells, who make, as their tagline says, “Fine nerdy scents for fine nerdy people.” They have created a set of perfume oil blends inspired by the characters of Gabriel’s City, and I’d like to give some away at the end of this tour! You’ll get seven 5-ml bottles,