Today we are shining a spotlight on Kelly Jamieson's latest menage novel, Three of Hearts, and this year's Holiday Charity bundle from Riptide Publishing.  There's also a blog tour giveaway to enter and a chance to have a hand in next year's offering. 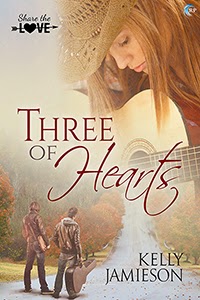 Haylee Tremayne is tired of the road. The concert tour for Three of Hearts was a success, but she’s confused by the inexplicable tension between her bandmates, Ben and Lucas. She’s also ready to go home to her boyfriend in Nashville. Time off would probably help everyone relax, even if it is Christmas, a season with too many bad memories.

But right before their last concert, Haylee discovers she’s been dumped for a sexy girly-girl. Story of her life: all guys see is tomboy Haylee. At the after-concert party, she drowns her sorrows and—desperate to feel feminine for once in her life—asks Ben and Lucas for a threesome. And it’s just as sexy and fun as she hoped.
Back in Nashville, Ben and Lucas prove again and again that their first night wasn’t a mistake. But the tension between them is still high, and on Christmas Eve, their ménage takes a stunning turn. When it all falls apart, Haylee is terrified that their crazy relationship might cost them the band, their success, and worst of all, each other.


Each year, Riptide Publishing releases a holiday collection in support of an LGBTQ charity. Twenty percent of all proceeds from the Share the Love collection will be donated to the It Gets Better Project.

Every comment on this blog tour enters you in a drawing for a $25 Riptide Publishing store credit. Entries close at midnight, Eastern time, on December 7. Contest is NOT restricted to U.S. entries.

Kelly is a married mother of two who lives a very ordinary life outside of her imagination. When she's not writing, she's usually reading. She also likes to cook, and that means she likes to read cookbooks and cooking magazines. In the summer she enjoys spending time gardening, and in the winter she likes to read gardening magazines and seed catalogues. She loves lying on the beach or on her deck with a glass of wine and a good book. She also loves to travel. As you can see, pretty much all of her activities involve reading somehow! Although she doesn't have as much time for it anymore, she also loves to shop, especially for clothes and shoes. Some think she's obsessed with shoes but that is not true (although her husband would point out that there is no room left in our closet).

Help us choose a charity!

Every year, Riptide Publishing releases a Holiday charity bundle with themed stories by bestselling authors. Twenty percent of the net proceeds of each bundle goes to a charity that serves the LGBTQ population.

Royalties from Riptide's 2013 Home for the Holidays charity collection have raised over $14,000 in nine months for the Ali Forney Center, and continue to yield several hundred dollars per month in royalties donations. Our 2014 Share the Love charity collection will be raising money for the It Gets Better Project, and we hope to report even better results than in 2013.

For 2015, the theme will be Holiday Surprises, and we'll have stories by HelenKay Dimon, Christine d'Abo, and Marie Sexton. But we don't have a charity yet.

We need YOUR help to choose the 2015 charity. Nominate your favorite LGBTQ charity below and Riptide might choose it as the 2015 Holiday bundle charity!

The chosen charity for 2015 will immediately receive a $5,000 advance against royalties (paid in 2015 on announcement of the award recipient). The charity will continue to receive 20% of all lifetime net sales income from the 2015 holiday charity collection, in the form of a monthly royalty check.

Three honorable mention charities will each receive a $250 donation.

Click here to nominate a charity. Both supporters and representatives of a charity can submit a nomination.