When is sex not the hottest thing on the page?

Admit it. We all love a good sex scene with really hot guys who are totally into each other. It’s one of the reasons we read romance. So what’s even hotter than a good sex scene?

That depends on the book, of course. UST can be crazy hot at times and it makes the payoff when they finally get into bed even better. That isn’t what sets the pages on fire in the Partnership in Blood series, though. For the wizards who populate those pages, the hottest thing going isn’t having sex with their partners. It's feeding their partners because their partners aren’t mortal—they’re vampires. And vampires have a very specific need.

The first time a wizard and a vampire meet, even before they exchange names, they exchange blood, and that provides the foundation for a military alliance and life-changing relationships for everyone. And it sizzles off the page.


Alain felt the vampire’s lips first, smooth and surprisingly warm for a member of the undead. Then the lips drew back, letting the vampire’s teeth come in contact with the sensitive skin. Not his fangs, yet, just his teeth. In another setting, it would have been a tender caress. Despite himself, Alain felt a surge of attraction for the beautiful creature holding his arm. The vision of that dark head bending to touch his wrist was sinfully erotic in its simplicity. Then the fangs punctured his skin, sending a jolt of pure lust through him. He had never been one for mixing pain with his pleasure, but the connection established between his wrist and the vampire’s teeth and tongue was positively sexual, despite the initial pain. Alain shuddered, trying to keep himself under control.

That’s just a taste. At the time I started the series, ten years ago, I was part of a writers’ forum that had monthly themes and at the end of the month, everyone would vote on the best story. Of course best almost always meant hottest. I entered Partnership in Blood in that month’s contest even though it wasn’t finished because I’d started it for the supernatural challenge. I didn’t expect it to do very well since Alain and Orlando hadn’t even kissed yet, much less had sex.

It won, and I think the reason for it was the scenes of the vampires feeding from the wizards. Okay, of Orlando feeding from Alain since at the time, I hadn’t gotten the other couples established yet.

They all have their moments, though. Here’s one from Thierry and Sebastien.

Hand still cradling Sebastien’s head, Thierry tensed reflexively, then sighed as Sebastien’s lips brushed his skin, the vampire’s thin moustache teasing alluringly over the sensitive inner skin of his arm. He had not understood Alain’s eagerness to let Orlando feed from him, had even questioned whether Alain had somehow been coerced into accepting Orlando’s attention, but he was beginning to realize what his friend must have felt. When other vampires—Orlando, Jean, the others when the partnerships were formed—had bitten him, even to some extent when Sebastien had fed from him the first time, it had been impersonal, almost clinical, and had left Thierry untouched, almost repulsed. This was not like that, though. There was nothing impersonal about Sebastien’s lips on his skin, Sebastien’s tongue preparing him.

On the contrary, it was the most personal contact he had experienced in almost two years—since Aleth moved out. They had seen each other and worked together in that time. Thierry had even tried to discuss their problems, but she had always brushed his efforts aside, saying they needed to focus on the war and on staying alive. Their issues could wait, she said, until the war was won. And now she was gone. And in her place, offering a closeness she had denied him, was a vampire. No, Thierry corrected himself. Sebastien. His vampire. The slide of fangs into flesh caught him in the middle of that realization, and the pleasure of the connection settled into him, a bone-deep sense of belonging that had been missing from his life.

Depending on who you ask, though, Jean and Raymond are the winners for the hottest bite scene.

Jean loses control one night and leaves Raymond covered in bites and thoroughly ravished. Raymond decides then that the bite marks over his heart are ones he intends to keep always.

Leaning forward, he offered his chest for Jean’s fangs. “Right here,” he said, rubbing the mark directly above his heart. “Bite me right here.”

Jean didn’t hesitate, the sight of the healing incisions from his fangs no deterrent now that he knew Raymond loved him. He lifted his head and bit into the muscle, the always-rich taste of Raymond’s blood assailing his senses, the knowledge now that he tasted love as well as lust an added aphrodisiac. He sucked hard, pulling in the life-giving elixir, not even questioning what he had done to deserve a lover with such generosity in body and spirit.

He had expected Raymond to want to top, but this was perfect, his fangs piercing as close to his lover’s heart as possible. Any other position would have made that impossible. Raymond’s blood strengthened his body, flooding him with a sense of power and possibility that defied explanation. His hips matched the rhythm of his lips and tongue, filling Raymond each time he pulled blood into his mouth, retreating each time he paused to draw breath. Through it all, Raymond hovered over him, taking what Jean gave, giving what he needed, and Jean fell in love all over again.

Of course when you combine feeding and sex, it might even top the feeding alone, but I’ll leave you to be the judge of that.

The latest in the Partnership in Blood series, available October 31, 2014 - 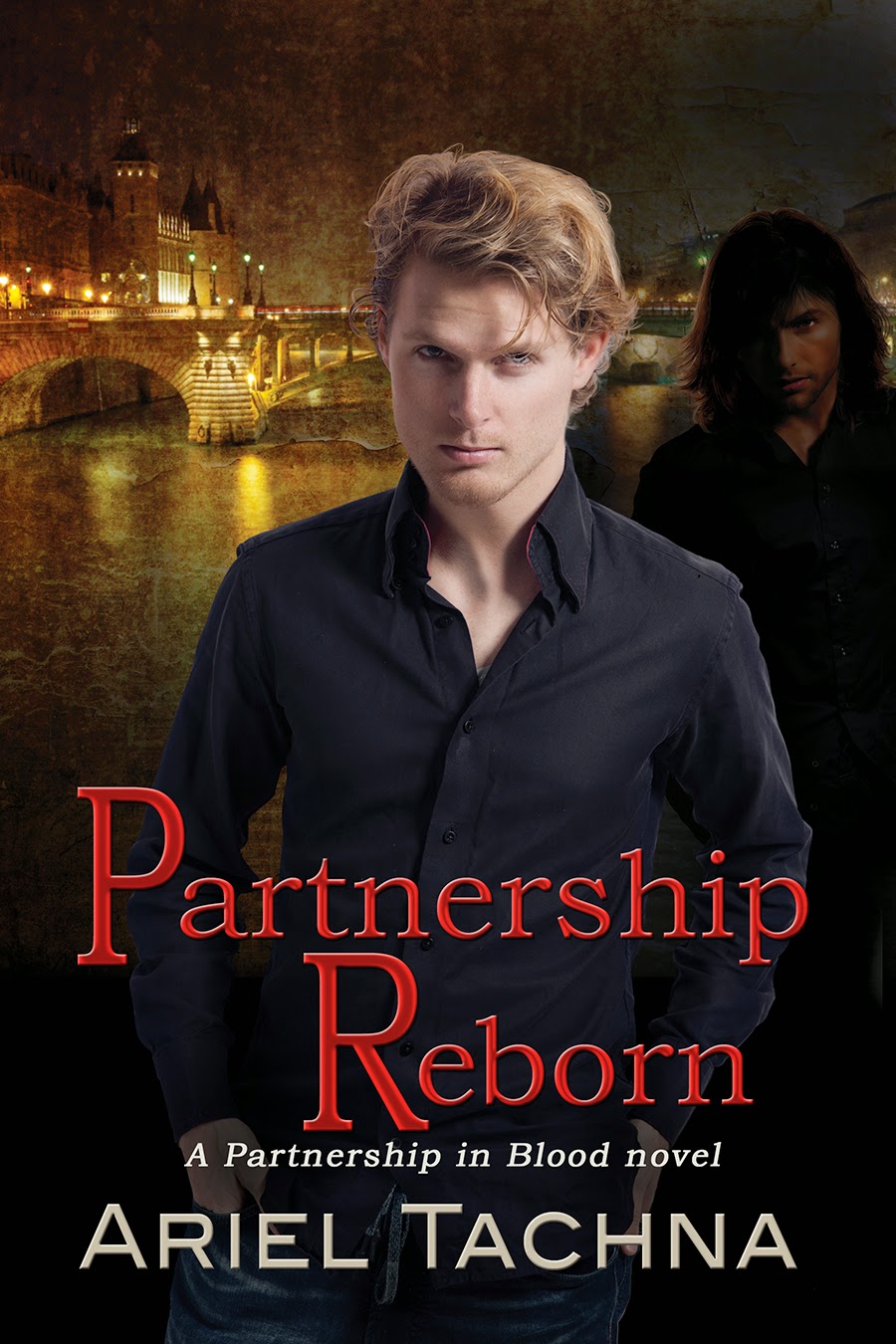 All his life, wizard Raphael Tarayaud has dreamed of a vampire—first as a friend, then as a lover. His search for his missing soul mate brings him to the attention of Sebastien Noyer, one of his childhood heroes. While Sebastien isn't his soul mate, he could be the perfect partner for Raphael's best friend Kylian Raffier.

As strange coincidences mount up, Raphael offers his research expertise to try and help Kylian and Sebastien understand what is happening to them, though the more he learns, the less he likes it. But it won’t keep him from fighting with everything he has to secure Kylian’s future.

When he finally meets Jean Bellaiche, former chef de la Cour and grieving widower, the meeting is disastrous, but Raphael can't let it go. He doesn’t stand a chance with Jean—who could compete with the ghost of Raymond Payet?—but nothing can stop him from dreaming.

The Partnership in Blood series is available from Dreamspinner Press. 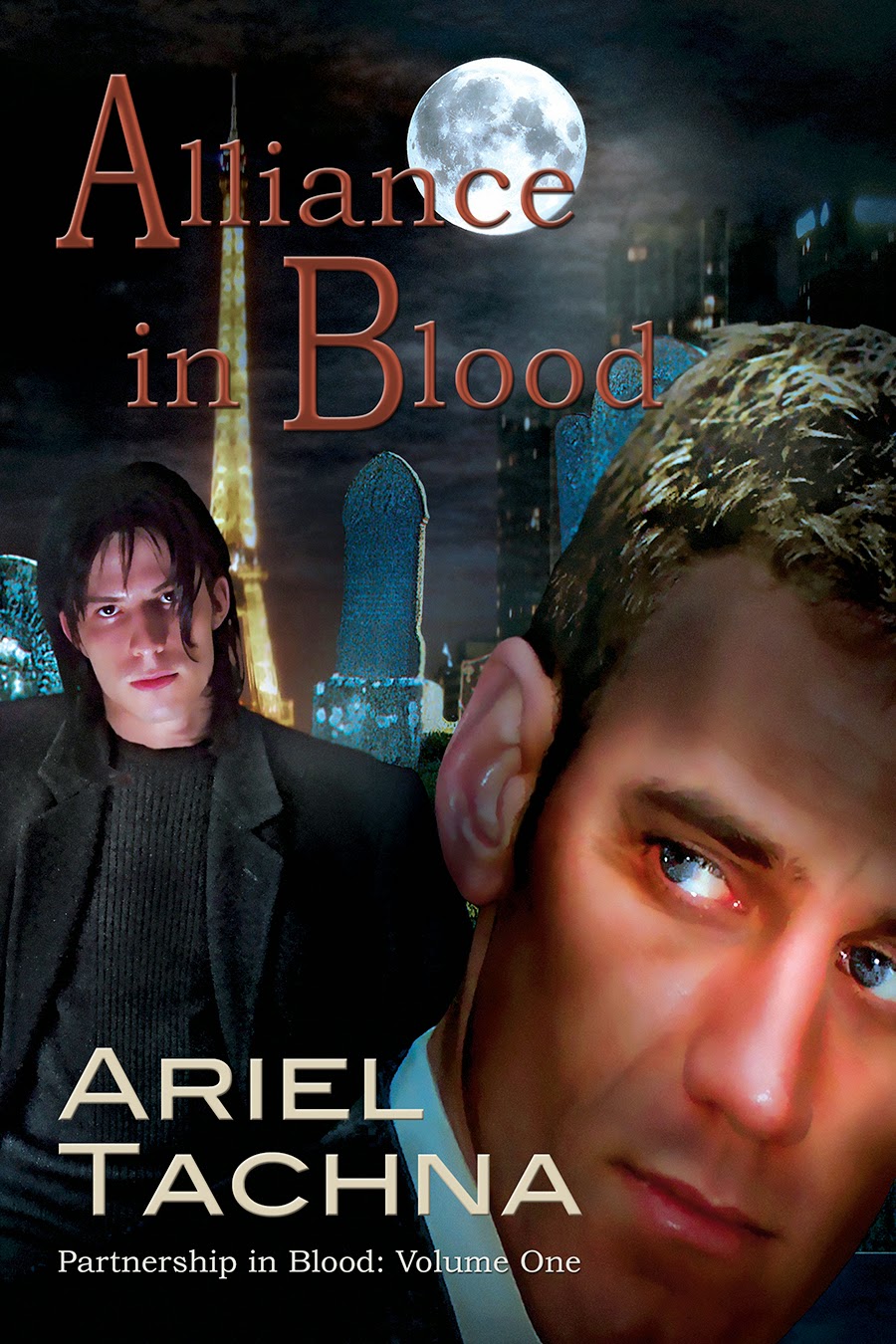 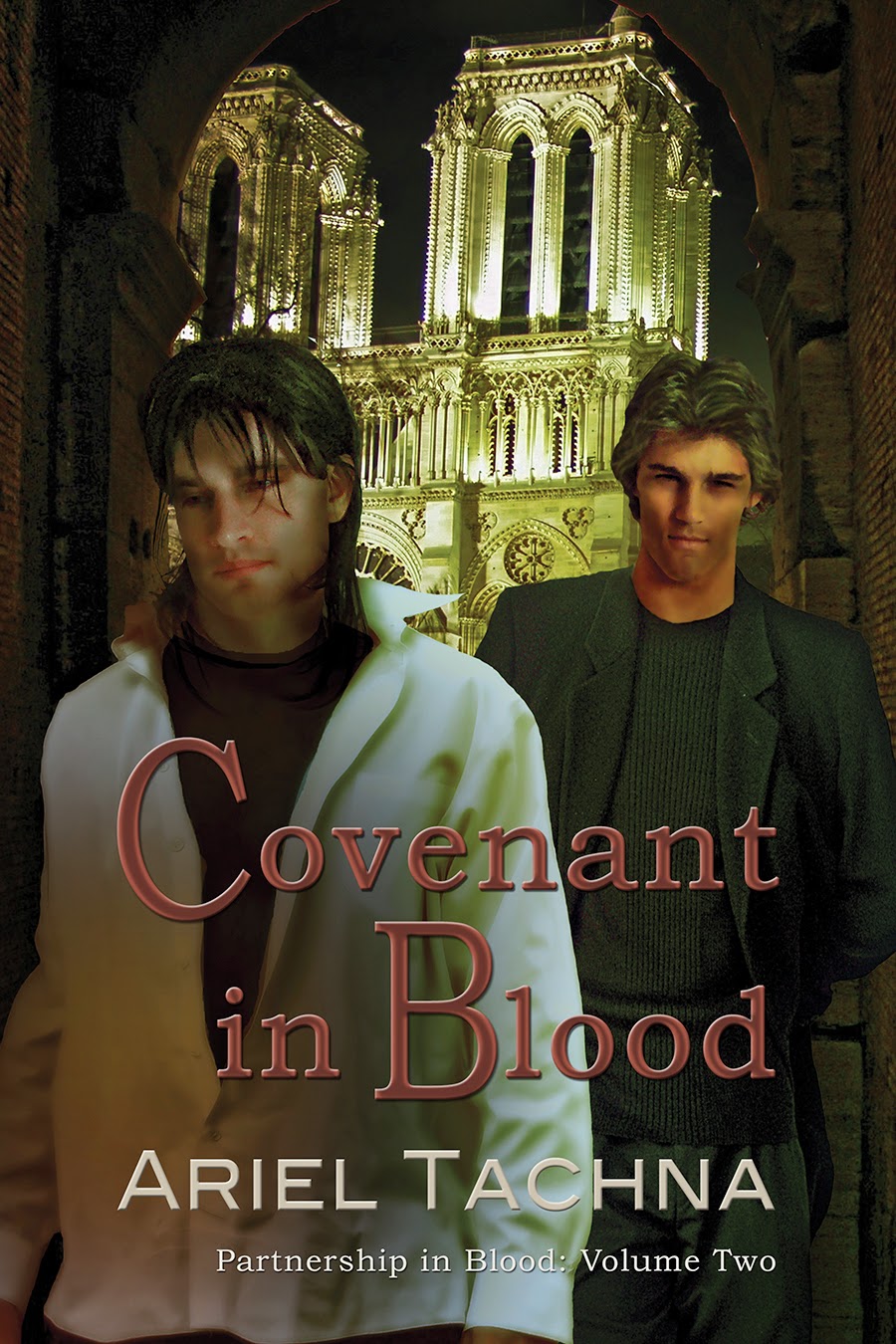 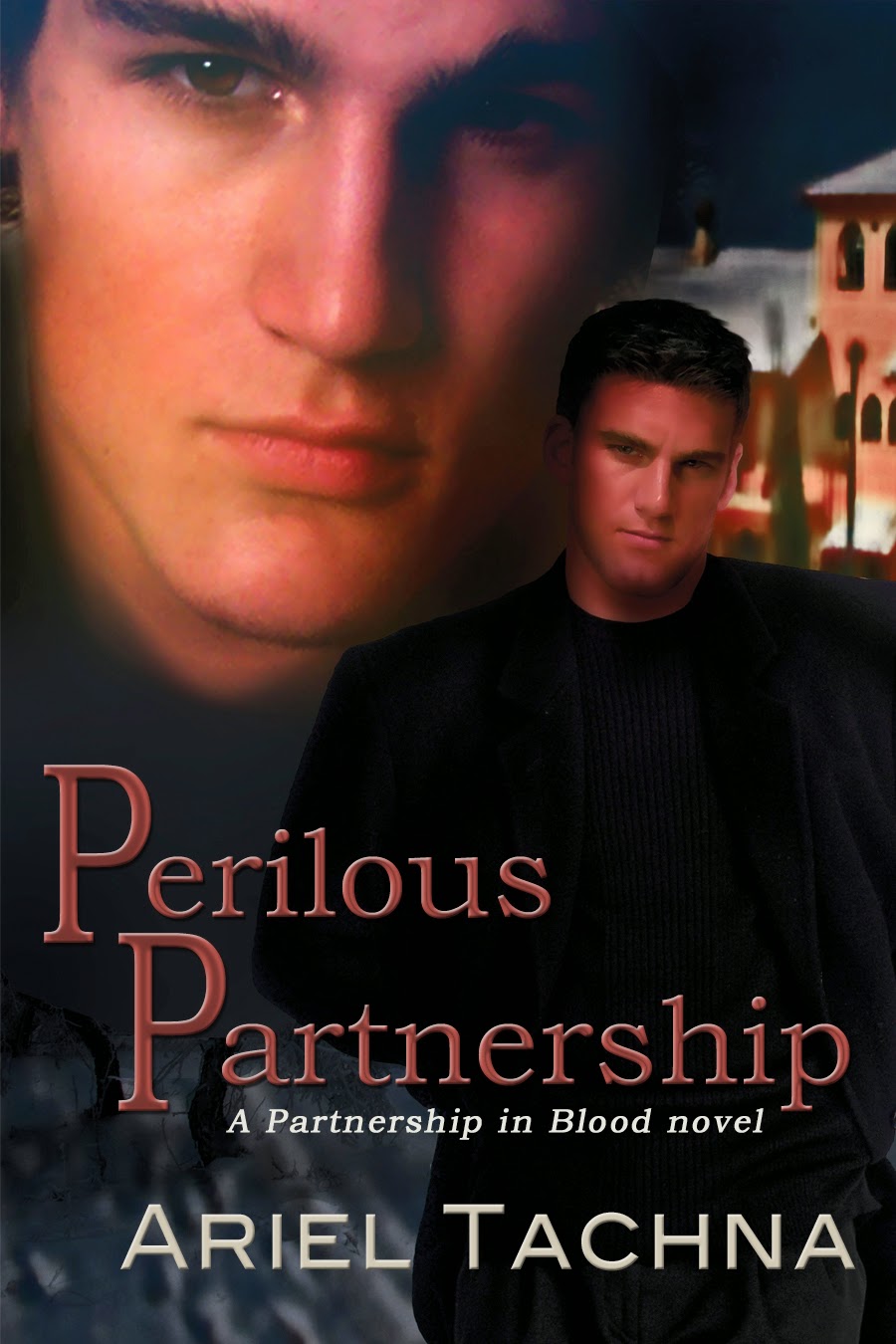