I’m trying something a little different with this blog tour.  I would very much like to invite you to join me over on Facebook at the Steampunk Flashgroup.

A flashgroup is sort of a Facebook pop up shop. It’s a short-term group that will be active for the length of the Prosperity blog tour. I’ll be over there all week, and a little bit after, talking about the book, giving away many, many things, posting exclusive excerpts of Prosperity and the upcoming sequels, answering any questions, and generally having a ball.

I do hope you will pop along and be part of the conversation.

I also have postcards showcasing the absolutely stunning Prosperity artwork. If you would like one, please join the group and drop me a message, and I will be delighted to send one winging your way. 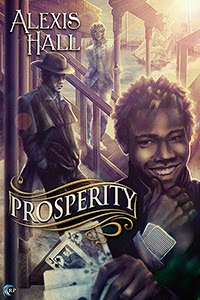 A breathtaking tale of passion and adventure in the untamed skies!

Prosperity, 1863: a lawless skytown where varlets, chancers, and ne’er-do-wells risk everything to chase a fortune in the clouds, and where a Gaslight guttersnipe named Piccadilly is about to cheat the wrong man. This mistake will endanger his life . . . and his heart.

Thrill! As our hero battles dreadful kraken above Prosperity. Gasp! As the miracles of clockwork engineering allow a dead man to wreak his vengeance upon the living. Marvel! At the aerial escapades of the aethership, Shadowlesss.

This volume (available in print, and for the first time on mechanical book-reading devices) contains the complete original text of Piccadilly’s memoirs as first serialised in All the Year Round. Some passages may prove unsettling to unmarried gentlemen of a sensitive disposition.

Alexis Hall was born in the early 1980s and still thinks the 21st century is the future. To this day, he feels cheated that he lived through a fin de siècle but inexplicably failed to drink a single glass of absinthe, dance with a single courtesan, or stay in a single garret.

He did the Oxbridge thing sometime in the 2000s and failed to learn anything of substance. He has had many jobs, including ice cream maker, fortune teller, lab technician, and professional gambler. He was fired from most of them.

He can neither cook nor sing, but he can handle a 17th century smallsword, punts from the proper end, and knows how to hotwire a car.

He lives in southeast England, with no cats and no children, and fully intends to keep it that way.

Authors L.A. Witt, Alexis Hall, and Cornelia Grey come together on a Steampunk book tour to celebrate the releases of Precious Metals, Prosperity, and Circus of the Damned.

Join us on adventures through the lawless, untamed, kraken-infested skies! Trek the snowy wilds of the Klondike in the company of a Mountie! Visit a soul-stealing circus where entertainment is at your own risk! Riptide's Gaslamp Fortnight will tempt you with the steampunk and gaslamp worlds of Cornelia Grey, Alexis Hall, and L.A. Witt.

And Gaslamp Fortnight is featuring a fabulous giveaway! Comment on the tour stops for a chance to win a $250 gift certificate to Harlots and Angels Steampunk Corsetry and get your own custom corset or personalized steampunk gear. Each new post you comment on earns you an entry into the drawing, so be sure to check out the rest of the tour schedule, too!

Hello I’m Sharon Ince and I own Harlots and Angels.  We are a UK based company that creates unusual sewing and crafting patterns, clothing, corsetry, props and accessories with a wide range of themes from Steampunk, Sci-Fi, Victorian, Gothic and Burlesque.

We have produced work for a large diversity of clients, including The Disney Corporation, the BBC costuming department, Sky TV, Working Title films as well as several Hollywood production companies and local theatre and film productions.

I have always loved to design and I’m self-taught. In fact I started at the early age of about 5 years old and have never stopped. I love to work with leather, sew natural fabrics, sculpt, and build my house with stone and wood; though my real passion is to design. 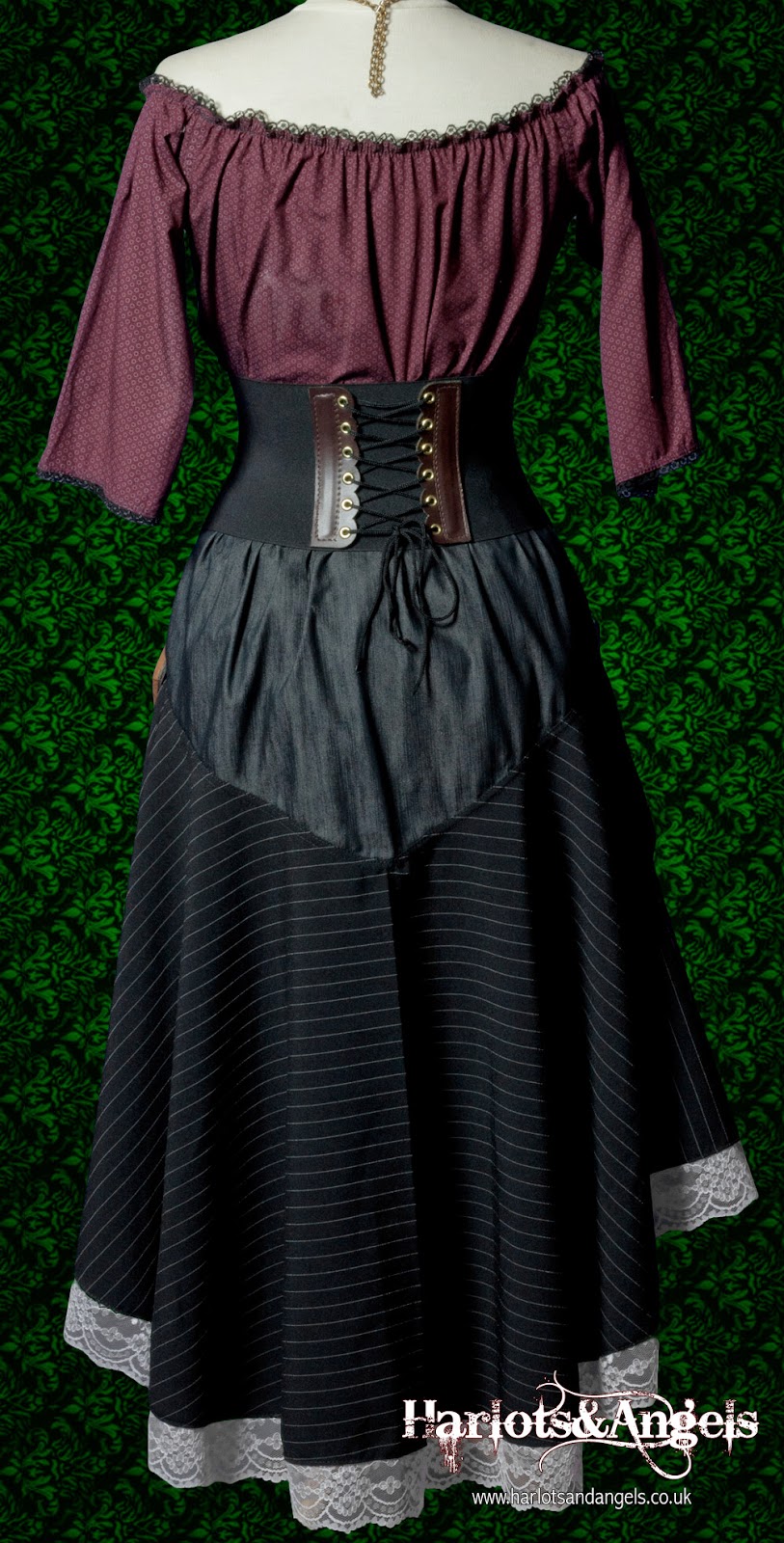 When I am starting out on a new design the hours fly by and I’m lost in the perfect bliss of experimenting, mathematical calculation, followed by the thrill of seeing the idea become reality.

My love of Gothic literature, mad inventors and scientists and all things Victorian has always filtered through my thoughts and designs, so when I first discovered the emerging Steampunk community some years ago many of my creations found their family niche. 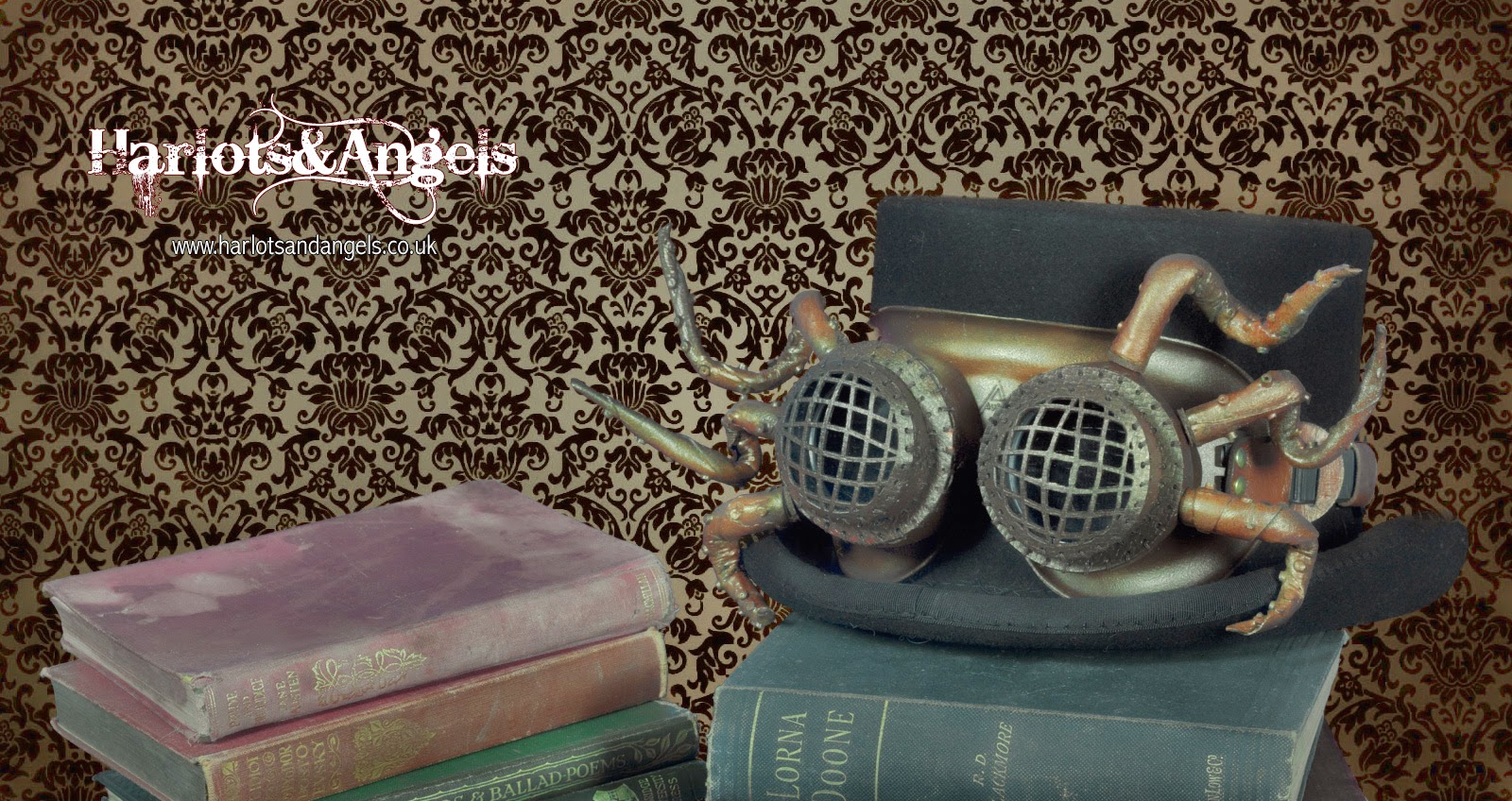 Email ThisBlogThis!Share to TwitterShare to FacebookShare to Pinterest
Labels: Mix It Up Monday