Hello my fellow java-lovin’ pervies! I’m right there with you, a huge fan of this lovely blog, so when Hayley—Dreamspinner’s Promo Queen Goddess—asked if I wanted to include CoP in my latest tour I said, “Of course!” I’m thrilled to be here, to talk a little about my very first novel, The Nesting Habits of Strange Birds.

After I said yes, I realized she wanted me to write a post on a theme. Even though the theme was dreams, my first reaction was, “Oh crap!” It’s not easy for me to write to a specific submission call or prompt. This subject is especially appropriate, though, so I’ll try to keep between the lines until the end.

Ever since I was a little kid I dreamed of being someone else. I dreamed of waking up and finding myself in a boy’s body, or of my parents surprising me with the news that I was adopted and my real parents had come to claim me. My childhood was scary and painful and dark, and great fodder for stories, but first I had to survive it. I did that by—you guessed it—making up stories, dreaming up better lives for myself whenever I had half a chance.

It wasn’t quick or easy, but I did more than survive—I managed to get myself nearly one thousand miles away from my toxic birth family.

When I turned 30 the dream I had as a child resurfaced. I started writing with the goal to be published, and not because I needed escape; I did it because I wanted to see the dream come true. I actually remember thinking (as I had when planning the kid J), “If not now, then when?” My queer little stories were mostly rejected, but some weren’t. Later, a few New York agents expressed cautious interest in my work… but ultimately passed because they couldn’t sell a book so far left of center.

I kept writing, though, because that’s what writers do. Even when I let everyone around me think I’d given it up—I still kept writing. I’m glad I did, because when I realized again that the people writing the stories I wanted to read—about queer folks like me trying to find love and their place in the world (or whodunit or the way back to their home planet)—that those if authors could do it, maybe I could too. With the encouragement of a wonderful lady, I got up the courage to start submitting again, and now I have a growing catalog of books in one of my favorite genres—Romance!

The Nesting Habits of Strange Birds was one of those wonderful stories that took on a life of its own within the first few thousand words, and a year later Phil and Lee made my dream of becoming a published novelist come true. I’ll always love those guys for that, and for letting me live their lives for a while.

Now here’s the fun part. If someone asked you what you wanted to be when you grew up, what would you’ve told them when you were in the first grade? Be honest, if you wanted to be a mommy or an astronaut or a tiger, I want to hear it!

Two random commenters will get prizes for their intestinal fortitude. I haven’t had time to knit anything naughty for this giveaway, but I did make the leather and brass bird-themed bracelet! 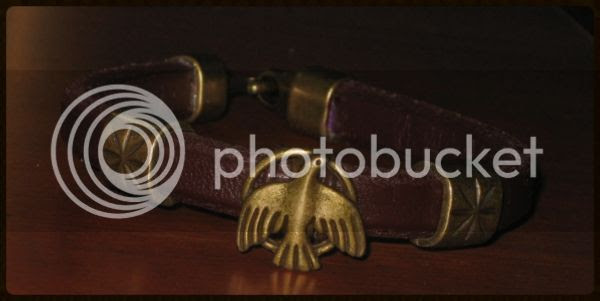 Since I’m a starving artist, the bracelet is only for US readers, but the second prize is an ebook copy of Nesting Habits, so speak up all you International folks!

(And don't forget to include your email addy in the comment.)


Here’s an excerpt that Lee whispered in my ear after I thought the story was over. It surprised me, just like everything that comes after. I hope you enjoy it.


TUESDAY MORNING he called Phil, and at five thirty that afternoon was almost literally bowled over by him in Jerry’s driveway. It felt so good to be with Phil again, Lee wanted to pick him up and spin him around but the dull ache in his leg stopped him. They laughed through a few short but oh-so-sweet kisses, like it had been two weeks or months and not only two days since they’d been together.

Lee kissed his neck, drawing another soft chuckle from Phil. “The bus.

“The—” Phil pushed Lee away and looked down the street, first in one direction and then in the other. “How far did you walk?”

Phil gripped his hand and headed down the driveway. Lee smiled when he realized he wasn’t being pulled or rushed, just led. He followed Phil in the back door and through the kitchen.

“Sorry about the stairs. We can stay up here if—”

“It’s okay.” Lee smiled and hopped down the steps on his good foot.

Lee shrugged and followed Phil through the first room, set up the way the garage had been the day he and Uncle Lenny fixed the pipe—stacks of Bankers Boxes, electronic equipment, and a shredder the size of a small dishwasher. The basement was fully finished. They went through a door to Phil’s living space and he pulled it closed behind them. He’d wondered what Phil’s place was like, for some reason he’d pictured it as being spare and reserved. Looking around at the photographs on the walls, the overstuffed bookshelves and brightly colored furniture, he wondered why.

“Sit.” When Lee moved toward the bed, Phil pointed to a round, bright orange chair in the corner under the casement window. It was a refugee from the seventies, just like most of Mom’s furniture. “Uh-uh. Here.”

He sat and tried to mask his relief to be off his feet but didn’t do a great job of it, especially after Phil pushed a matching ottoman over and patted the top. Lee settled in with his foot up, and before he could invite Phil to share the chair, he rested a hand on Lee’s toes and stole his voice.

“You’re not allowed to walk more than a half a block.” Phil’s tone was gentle but firm, and when he punctuated that sentence by softly rubbing his foot, Lee lost the will to argue and relaxed into the chair. “If there’s somewhere you need to go, call me and I’ll get you there.”

“It’s okay—” Lee sounded as breathless as he felt.

"Maybe you didn’t notice that wasn’t a question.” Phil sat on the ottoman and pulled Lee’s foot into his lap. The left corner of his mouth quirked into a smile when Lee sighed. “So I’ll say it again. You’re not to walk more than half a block. I’ll be your chauffer until you can drive again. I don’t work for free, though.”

Lee moaned softly and smiled, his eyes falling to half-mast. Phil continued the gentle massage of the parts of his foot that weren’t encased in the cast and boot.

"Don’t you have a job you’re working on?”

“Sure, but it’s not time sensitive. I’m getting you out of this cast as fast, and with as little pain, as possible.”

Phil slipped off the ottoman and perched on the arm of the chair. He caressed Lee’s cheek, turning his head toward him. “Do we have a deal?”

Lee nodded, slipped his arms around Phil’s waist, and rested his head against his chest.

“Don’t you want to know how I’m going to get paid?”

“Doesn’t matter. Whatever you want….”

Phil wrapped his arms around Lee’s shoulders, and Lee thought he felt a nuzzle on the top of his head.

“Be careful with sweeping pronouncements like that. You don’t know what I’m thinking of.”

"But I want to.” What he really wanted was to pull Phil onto his lap, rip all their clothes off, and leave him squirming and helpless with pleasure, but maybe not in that order.

“You can start by letting go of me.”

“You haven’t driven me anywhere yet. Maybe I don’t want to let go.”

“I don’t remember saying payment would be due after performance. Consideration is due on demand.”

Phil drew his palm along Lee’s shoulder and down his arm, sighing when he squeezed his triceps. Lee gasped when Phil moved his hand back up to his shoulder, under the fabric of his T-shirt. When Phil moved away, Lee reluctantly loosened his hold.

The ottoman was on wheels, and Phil rolled it away from the front of the chair, but not far enough to dislodge Lee’s foot. Lee moaned when Phil knelt on the floor in front of him, and again when he leaned against him and kissed him slowly, deeply, circling Lee’s tongue with his like a preview of coming attractions. 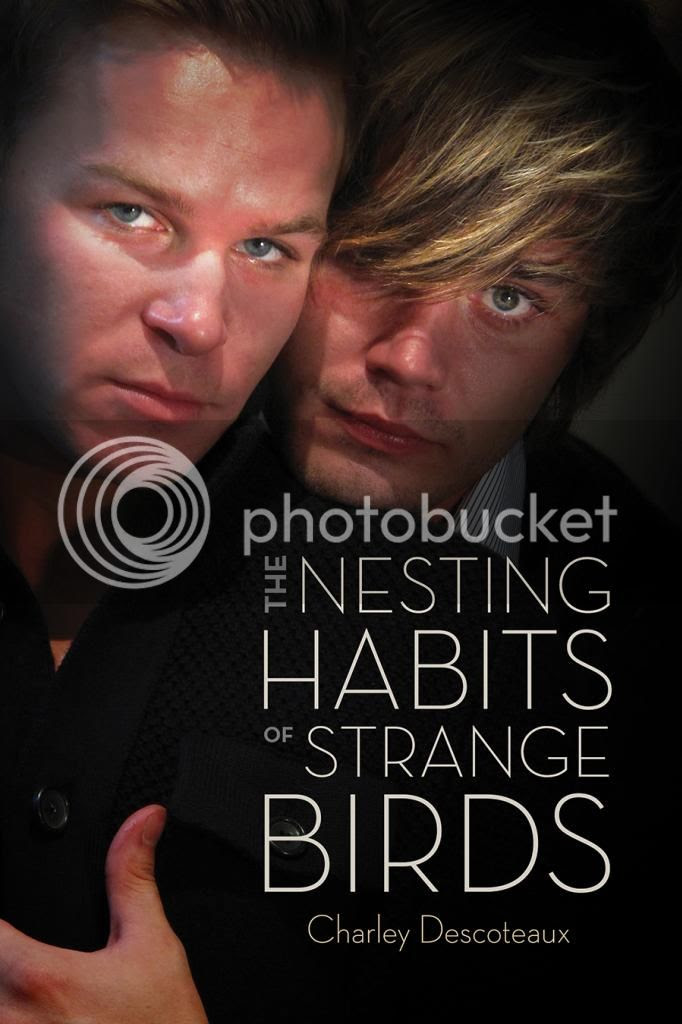 All he ever wanted was to be a normal guy….

Phil Brask spends his days in the basement of his mentor's Victorian home, converting legal documents into electronic format. When the pipe feeding the water heater bursts, Lee Redding arrives in the plumber’s truck and draws Phil away from the narrow focus of his computer and camera lens. Lee gives Phil hope for a life beyond the walls he’s constructed using the nesting habits of migratory birds and dense legal files, a guided tour through a world filled with romance and music…maybe even family. But there’s a reason Phil retreated behind those walls, why he panics at a simple touch.

Lee has a good life—working with his uncle and on his mother’s farm, playing bass in a horrible metal band, and hooking up when he pleases—but he’s always suspected something was missing. When he meets the hot photographer with the icy-blue eyes, he knows exactly what that something is. Phil isn’t like other guys, but neither is Lee beneath his carefree exterior. Maybe Lee's the perfect guy to show Phil that everything doesn’t have to be done the hard way and "home" isn't a four-letter word.

The Nesting Habits of Strange Birds is available from:

Charley Descoteaux has always heard voices. She was relieved to learn they were fictional characters, and started writing when they insisted daydreaming just wasn’t good enough. In exchange, they let her sleep once in a while. Home is Portland, Oregon, where the weather is like your favorite hard-case writing buddy who won’t let you get away with taking too many days off, and in some places you can be as weird as you are without fear. As an out and proud bisexual and life-long weird-o, she thinks that last part is pretty cool.