Tra la! It's May!
The lusty month of May!
That darling month when ev'ryone throws
Self-control away.
It's time to do
A wretched thing or two,
And try to make each precious day
One you'll always rue!
It's May! It's May!
The month of "yes you may,"
The time for ev'ry frivolous whim,
Proper or "im."
It's wild! It's gay!
A blot in ev'ry way.
The birds and bees with all of their vast
Amorous past
Gaze at the human race aghast,
The lusty month of May.*

Or, in the Ni Coileain household, it’s the “getting ready for graduation month of May.” I could do with a little more lust and a little less ‘please get the damn library book turned in so they’ll give you your diploma’, but what I want and what I get are poles apart this time of year…. (Though I’ll admit, I spend quite a bit of time humming and sounding just like Vanessa Redgrave in my imagination.)

I have to do just a little bit of bragging, here. My son will be graduating from high school in June, and turning 18 on the Fourth of July. (I will tell anyone who asks my trying-to-fall-asleep-in-the-hospital-with-fireworks-going-off-right-outside-my-window story, but I won’t task you with it here!) I’ve had my share of nail-biting moments in the last 18 years; he has Asperger’s Syndrome, which is supposed to mean, among other things, a disdain for fiction, or for reading as recreation. People with Asperger’s tend to prefer to read nonfiction, and if they write, it’s research papers, history, technical writing.

May. Lusty month of. The last chapter of Tempted from the Oak is set on Bealltainn, the Scots spelling of Beltaine, May 1. And I thought I’d leave you with that, with Gavin and Tearlach and the magick of May. Happy reading!

Bealltainn (May 1)
The familiar tingle of magick startles me from a light doze. It is dark, this night of the great feast, but the night feels new, somehow, the faintest glow still lingering around A’Chailleach to the west. Or might the glow be the light of fires. Are any left who still remember and honor the mountain and the Mother in the old way?

Your newness comes. The darag’s soft spring leaves give its voice a softer tone than it used in the depths of winter.

Is it still daylight in the “city of lochs”? He could be seen as he disappears. Gavin has always waited until dark in the city where he works and spends his days before coming home.It is. But I can spin illusion as far as the magick around his an-dharag extends. The truth of that place is hidden from all except your human.

In that moment, as my frown turns to a smile at the darag’s reference to “my human”, Gavin appears under the tree, his smile as bright as the Sun he has just left behind. His crisp white shirt makes me want to feel it against my skin, so I step from the tree and take him into my arms. What brings you here so early, mo cuaras?

“Is it early?” He kisses me, playfully, nibbling on my lip.

I thought you would wait until sunset.

“I don’t like keeping you waiting.” He rubs his rough cheek against mine in the caress he has learned I love, then takes my hand and leads me up the hill toward the shieling. “Besides, I wanted to celebrate with you. First day at work.” The door swings open, creaking softly. “First day of a new life.”

Such a difference a few moons have made in my lover’s home. Hardly a day passes when he does not return with some small thing from across the ocean. Books, clothing, a small “generator” that powers a single “electric light” and a “charger” for a “cell phone”—words which stubbornly refuse to be translated into darag-speech. Other items, such as the colorful blanket on the bed and the beautiful decanter of port wine on the table, are small gifts from the darag. It finds them in the Havens, where magick has broken free and brings them here to surprise my human. No doubt to the great confusion of whoever owned them previously.
He brings up the light, then takes two glasses down from a small shelf and slides the glass stopper from the decanter. I can feel his joy, like light shining from him.

Your dream has come true.

“It’s started to.” He begins to pour. Then, as if sensing my unease, he stops, sets the decanter down and turns back to me. “What’s wrong?”

I close my eyes as his hand touches my cheek. I understand his dream. He always glows when he speaks of it. My human is a bard, a storyteller, but the tales he tells are the sort which make worlds come to life for the eyes instead of the ears. A bard is a treasure here in Alba. I turn my head, for the pleasure of feeling his touch. Now you have found ones who appreciate your gift and will reward you as you deserve.

Gavin’s beautiful blue eyes are puzzled and I sigh. Your Guthrie is your new life, mo cuaras. A new beginning, a new family. Do you still need this place? I glance around the little shieling, the old shepherd’s hut, wondering—not for the first time—how it appears to a human accustomed to all the things he has described to me. I wonder again how awkward it is for him, the life he made for himself here, when he thought he had nowhere else to go, working half a world away by day and letting the darag bring him back here by night. Do you still need…

“Oh, God.” There are arms around me. Whisper of fabric against my skin. Scent of my human filling me. “This is my home. And I will always need you.”

Words spoken in the shadow of A’Chailleach on her holy night have power, mo cuaras.

“Let them have power, then. I mean them.”

I see only truth in his eyes, feel it in his embrace. Truth and love. Which are the same thing.

“Mo ghaol ort gu brath,” I whisper, in the only human language my voice knows.

I will love you forever. 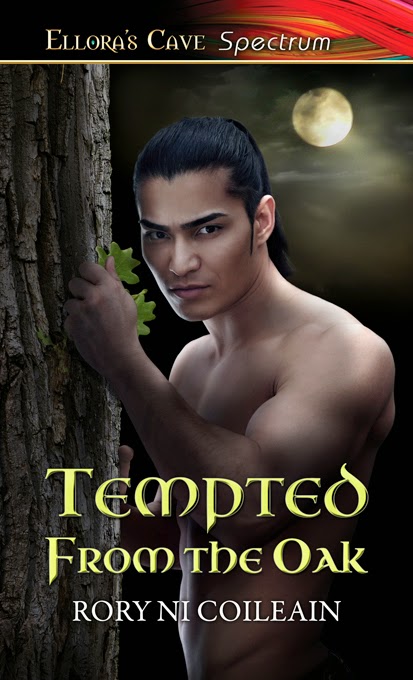 With his blue eyes and heart-melting smile, Gavin could have been made-to-order to entice Tearlach, a lonely tree spirit. But the human has been enticed—stolen from snow-buried Minneapolis to the Scottish

Highlands by Tearlach’s darag, the ancient oak tree of which he is the living spirit.

Tearlach is trapped within the darag by the terrible memory of his own death—hundreds, maybe thousands of years ago, but as recent to him as his last heartbeat. And if desire for the handsome human fails to tempt him out, spirit and oak are both doomed.
Gavin is more than willing to be Tearlach’s temptation. But Gavin has a history of his own—a hopeless dream, one impossible relationship after another. Surely a perfect lover, a sensual tree spirit living in the shadow of a holy mountain half a world away, is another unattainable dream. Can he expect Tearlach to trust his heart when he doesn’t trust it himself?

Tempted from the Oak is available from Amazon