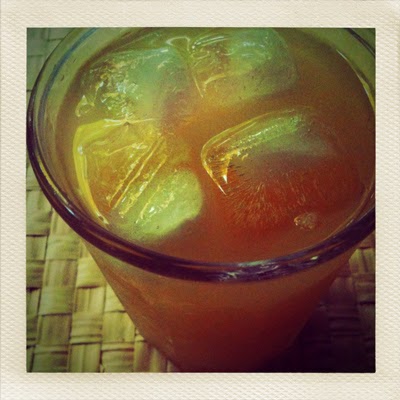 Today's drink is mango screwdriver and I'll be griping about clichés. I love books and movies, and I know tropes and archetypes exist for a good reason. Put a grizzled private detective and a femme fatale together and I know what to expect and the story better deliver. However, I don't want to know every line they protagonists will utter before they do.

When writers rely too heavily on formula, the story becomes stale. It's the Lego style of writing—assembling those plastic blocks to make an object exactly like the one on the box might be satisfying to the individual but it's not creative, and isn't very exciting to watch either.

Unimaginative storytelling frustrates the heck out of me, and I've been remaking movies in my head since I can remember. I'm pretty sure I'm not the only one. I bet almost everyone have a secret world of fanfiction swirling in their heads. Sometimes you just can't take it anymore and have to put your story to paper.

I started writing vampires by a fluke, because I was fed up with the way the bloodsuckers are portrayed in books and movies. I mean, they liver forever, don't age, have no health problems, don't have to watch their weight, and apparently they are all independently wealthy. Yet they can't stop sulking and moping. It's like that skinny chick pinching the roll of skin on her flat tummy and complaining about being fat. I want slap them all silly.

So I set out to write a vamp who has a sense of humor and a zest for (un)life when writing Spirit Sanguine. Harvey also turned out to have a penchant for sexy role-playing and even cross-dressing. This came as a surprise but a pleasant one. Sex tends to be way too serious in romance novels, if you ask me. I like sex dirty or funny. In the sequel, Temper Sanguine, Harvey and his oft befuddled but always willing partner, Gabe, go on their kinky ways.

In the first book they wore a variety of costumes for a variety of reasons and the trend continues. Temper Sanguine starts with Gabe dressed as Van Helsing from the 2004 film with Hugh Jackman. Playing his assistant is "Harvey Valerious, Anna’s younger and sluttier half brother." Harvey's wearing a corset with tight leggings. They are on a job, but you can't put Harvey in a costume without kinky shenanigans ensuing, as this short excerpt demonstrates:

The slender figure peeled out of the darkness and stalked toward Gabe with feline grace. Dark fabric and leather held his limbs and torso in a tight embrace, accentuating every supple movement. He was a feast for the eyes, beauty and peril at once.

Gabe’s muscles tensed and his heart began to beat faster as he stood transfixed. The vamp halted only when they were almost nose to nose. Up close, Gabe could easily make out the mix of Asian and Caucasian features even in the dim light.

The vampire’s lips parted to a salacious smile, revealing a pair of razor-sharp upper incisors. “Well, well, what do we have here?” he said in a low purr. “You seem lost, my scrumptious. I’ll be delighted to show you the way—all the ways. It’ll be my pleasure.” He leaned closer and his lips moved a hairbreadth away from Gabe’s ear as he spoke those last words. His fingers brushed over the bulge in Gabe’s pants.

Goose bumps raced across Gabe’s skin, and lust blossomed deep inside, but he pulled himself together. “Harvey, be serious. We’re on an assignment.” The whisper came out raspier than he’d intended.

Harvey pulled back a few inches. His nostrils still flared, but he’d retracted his fangs. “Party pooper.” He sighed at Gabe’s reproachful glare. “Fine, Angel. Work first, play after.” He bowed his head, and the look in his eyes shifted from predatory to submissive. “So, what’s the plan…Mr. Van Helsing, sir?” 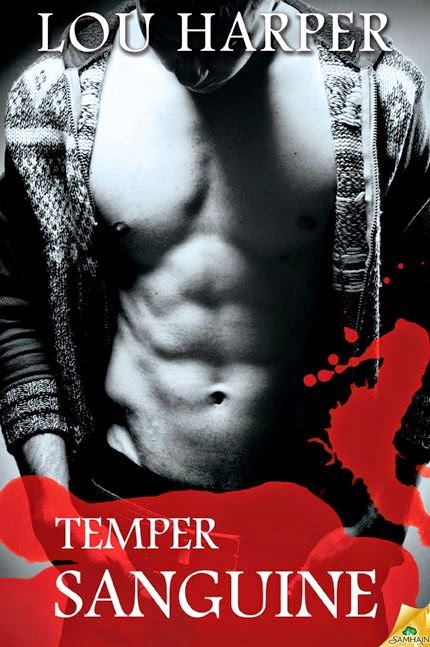 One bite won’t kill you. Unless it does.
Sanguine, Book 2
Gabe Vadas’s slayer ancestors would be spinning in their graves if they knew that not only is his boss a vampire, so is his lover. But that lover, Harvey Feng, is cooking something up in his lab that he seems reluctant to disclose.
The secrets they keep from each other and the nightmares they share are driving a wedge between them.
Harvey fell off the vegetarian wagon with one taste of his lover’s blood. Except recently it’s been having some unusual—and disturbing—side effects. And he fears their connection has awakened something dark and dangerous.
Sent to New York City to help the new top vamp clean up the mess the old one left behind, Gabe finds more than a few stray feral vampires. A doctor with a dubious history is hell-bent on creating a new race of unkillable bloodsuckers.
The investigation takes Gabe and Harvey across an ocean, and deep into the past. Where they discover demons that have the power to reach across the centuries to destroy them both.

Under a prickly, cynical surface Lou Harper is an incorrigible romantic. Her love affair with the written word started at a tender age. There was never a time when stories weren't romping around in her head. She is currently embroiled in a ruinous romance with adjectives. In her free time Lou stalks deviant words and feral narratives.

Lou's favorite animal is the hedgehog. She likes nature, books, movies, photography, and good food. She has a temper and mood swings.

Lou has misspent most of her life in parts of Europe and the US, but is now firmly settled in Los Angeles and worships the sun. However, she thinks the ocean smells funny. Lou is a loner, a misfit, and a happy drunk.