Body markings… We all have them, right? Some are scars, some are tattoos, some our body made on its own, but no matter who you are, you’ve seen them on yourself and others.

When I began designing the characters in Desires’ Guardian, it was actually for Designs of Desire, as that’s where they first appeared. I began with Chase, of course, as we meet him much earlier, but had much more fun with Rhys’s body marking than I did with Chase’s. Each one has something very specific and meaningful, though Chase’s is a point of pain, not pride like Rhys’s.

Rhys was born and raised in the USA, but his parents are both from Wales. He and his ‘little’ brother Dal have matching tattoos on their biceps. When I decided the guys would have tattoos, I then set out to find images for said tats, the problem came in that I’m weird, it seems. Being their family is Welsh, I decided that their pride in this fact would show through and so Rhys received a red dragon tattoo. Try finding a welsh-style red dragon tattoo that is not the flag, but was done in a biceps banding style. Yeah, not so easy. This means so much to Rhys that he doesn’t even have a tattoo from when he was an active Marine.

In direct contrast, Chase has a body marking that you don’t see at all in Desires and only finally see two-thirds of the way through Desires’ Guardian! The very item that many consider Chase’s signature item covers his marking until Rhys decides to show Chase how he sees Chase.

The scene mentioned was one of the hardest for me to write of both books, but this bit is my favorite part.

“I know, nasty,” Chase choked out, hating the scar almost as much as he hated that he’d done that to himself. Chase expected revulsion or at least the Rhys patented scowl. What he got instead made his head spin and his heart hurt.
“It’s a battle scar, same as any on me,” Rhys countered. Instead of pulling back, he leaned down and teased the twisted flesh with the tip of his tongue.
Chase gasped, then moaned. No one had ever touched him there. He never imagined someone would want to. “You don’t have to do…. Oh God, Rhys. Why are you—”
“Why am I doing this?” Rhys asked, then teased his wrist again with tongue and lips. “Because all of you is worthy of attention and love, sweetheart.”
His eyes prickled, but he fought back the tears. How could Rhys be so…. He wasn’t even certain what Rhys was being, but it boggled his mind.

It’s not just what marks we have on our bodies, but how others perceive us because of them. Rhys’s tattoo makes him seem more butch, but Chase’s is gruesome and painful, in his own mind, no matter how others would view it.

In a perfect world, the only markings we would bear would be those either natural (birth marks) or chosen (tattoos and the like), but this is not that world and the scars we carry often flavor our perceptions of others and of our selves.

Be sure to check out the entire story of Rhys and Chase in Desires’ Guardian to learn more about these two men and why Chase hates his markings so much. 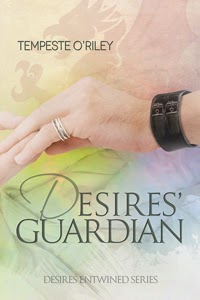 Most people see Chase Manning as the party-boy twink he seems on the surface. Only James, Chase’s BFF, knows the depth of his loyalty and the extent of the wounds Chase carries inside. When Chase meets Rhys Sayer things don’t go well, but he can’t shake his attraction to the huge, sexy man.

Rhys is a man of contradictions and fear—a strange combination for a PI and bodyguard. He’s in a bad place emotionally when he sets eyes on Chase for the first time. When Chase puts the moves on him, Rhys insults him, thwarting any possibility of a relationship. Rhys doesn’t see himself as a complicated man, but he dreads the very kind of connection he desires.

Just as they’re trying to overcome their uncertainties, Chase is put in harm’s way. Luckily Rhys and their friends have all the right talents to help Rhys save the man of his dreams.

Desires' Guardian is available from Dreamspinner Press on June 6, 2014.

Tomorrow I have a special gift for all my readers though, and I’d love to share that with each of you. My free short Bound by Desires comes out. I would invite you to enjoy a little with that as you await Desires’ Guardian’s release.

Tempeste O’Riley is an out and proud omnisexual / bi-woman whose best friend growing up had the courage to do what she couldn’t–defy the hate and come out. He has been her hero ever since.