Mix It Up Monday with Susan Mac Nicol

Today we present a character interview from Susan with Owen Butler, one of the stars of her novel, Worth Keeping.  Also we have an excerpt from her latest release, Double Alchemy: Climax along with blog tour info and a rafflecopter giveaway.


I’m sitting here with Owen Butler, and he’s getting ready to answer some burning questions I have for him. He’s looking a bit worried actually. Grins I think he’s nervous.

Owen -frowning mock seriously - I’m not nervous, Sue. I just know you’re going to be all about the sex.

Me -  putting on innocent face - No I’m not. Well, maybe a little. But really, I want to ask you a few questions so that the readers can get to know you better. Are you ready?

Owen - Yep. Fire away. sits back and gives me a lazy smile. Do your worst.

Me -  clearing throat and trying to look serious. Okay. Do you and Nick have a load of sex then? How’s those sex toys you took from the smugglers? Any good ?

Me -sniggering. Don’t get your panties in a bunch. You asked for that one. Okay, seriously. Schools face into that of a professional interviewer. I know you love Nick’s paintings and organised the showing for him recently, as we saw in the bonus scene.

Owen - smiles fondly. Yes. He did really well on that show, a real trooper. And now he’s at least getting some recognition for his brilliant art.

Me -Of course you’re biased, that one he did of you is absolutely beautiful. A lot of love went into that .

Owen -preening - Nick made my day with that picture. It’s on one of the walls of our bedroom at the cottage.

Me - I hear you had a really good Valentine’s dinner, but that Nick had you running around a little?

Owen - chuckling -yeah, he did, it was all part of his master plan. But it turned out to be a really good evening… winks at me suggestively

Me - So with all the drama that you had when you were both kidnapped, are you both okay now?

Owen - We’re fine. Brad kind of disappeared and to be honest, I don’t really care what happened to the bastard. Scowls fiercely. Nick is safe and that’s the main thing.

Me - So how is the new job going for you? I know Daniel had made you a partner in the business and it’s growing really well. How are your DIY skills doing? Snorts.

Owen - They’re doing very well ,thank you. Another glare. I’ve learnt a lot, Daniel’s a good teacher. I really enjoy working with him and the landscaping has become one of my favourite parts of the job.

Me - And how is Nick doing? We know he had a really tough time recently. Is he still in therapy with Melanie and are the nightmares better?

Owen - fiddling with a thread on his trousers - He’s much better. He still sees Mel every now and then but it’s a lot more manageable. The nightmares are definitely better. Don phones him all the time and checks up on him too, and that helps. Nick and his dad are very close as you know. If I didn’t look after Nick properly, he’d be down here handing me my arse on a plate. And it’s such a cute arse.

Me -I can’t disagree on that one.  Is Socks still as cheeky as ever ? He is such an adorable little thing.

Owen -smiling, Yeah, Socks is doing good. He stills plays with the pen knife and as he’s a hero, he gets more treats than he used to. Nick spoils him.

Me - And you too no doubt. Okay, we need to wrap this up. One more question then we’re done.

Me - Has your gag reflex got any better and do you swallow now? Laughing loudly as Owen’s face darkens.

Owen - growls. Ha bloody ha. You just had to get the last word in about the sex didn’t you. I should have known…mutters loudly and gives me the evil eye.

Me - Owen, thanks so much for being here and answering the questions. Say hello to Nick for me! 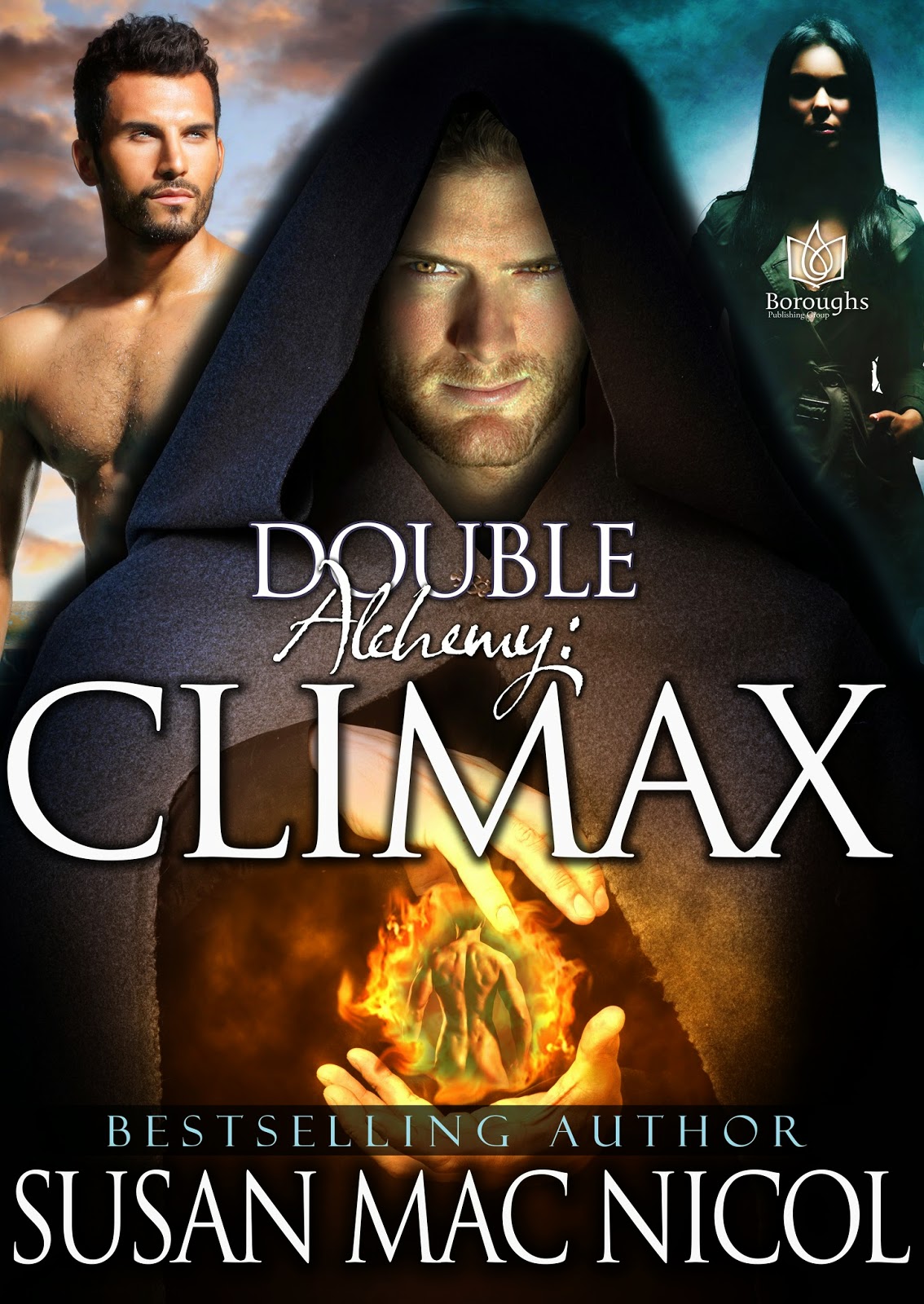 Powerful modern warlock Quinn Fairmont found ecstasy with the silver-eyed and not-quite-human Cade Mairston, but to know true happiness the pair must best both the shadow of a long-ago lover and an ancient enemy who seeks to destroy love, light and all they hold dear.

It begins with a Book of Shadows discovered by a London coven. The grimoire is as dangerous as it is rare, which is why it evokes modern-day warlock Quinn Fairmont’s desire. He collects objects of great power and beauty—like his lover, Cade Mairston.

Against all odds he and Cade found each other, but their perils have just begun. First is the ex-lover who once held Quinn in thrall. And, someone has been killing warlocks. Could it be one of his own kind? There are those too who would challenge Quinn’s power in their quest to overthrow him as Grand Master. Or is the danger something darker, something invoked inadvertently, rising from the shadows, building from the very inside of a man until it brings an end with a quick flash of light? Of the truth, the surface has only been scratched. Now Quinn and Cade must go deeper and find both answers and an end. They must learn what lurks in the hearts of men…and whether it seeks to love or destroy.

Double Alchemy: Climax is available from:

Quinn’s eyes flashed violently at his uncle. “I am not fucking losing him to the depths of a bloody Hampstead Heath pond.”
He knelt down beside Cade again, closing his eyes as he tried once more to heal, but the wound just kept seeping blood, now at a much slower rate than before. Cade’s face was ash white, his dark hair standing out starkly against the deathly pallor of his face.
Quinn. Your Cade is nearly gone. You have to put him in the water now before it is too late. There is no time for your modern medicine. He will not survive unless you do it now. The Water Sprites will take him and heal him as long as there is still a spark of life left in him.
“I can’t. Don’t ask me to do that. I can’t.” Quinn’s voice was strangled as he struggled to compose himself. His body was cold, his mind sluggish and he had never felt so desperate.
Daniel strode forward and despite his small and wiry frame, he picked Cade up in his arms. He looked at Quinn, his voice resolute. “He’s dying. This may be the only way to save him.”
Quinn growled and reached out with a hand to hold him back. Daniel sidestepped him and looked at him with a resolute expression. “You can hurt me if you want but it won’t help Cade. This is all we have left to try before he dies.”
Quinn’s hand still gripped him tightly and the older man winced.
“If anyone is going to do this, it’s going to be me.” Quinn’s voice cracked and he held out his arms. Wordlessly, Daniel placed Cade in Quinn’s outstretched arms and Quinn pulled his lover closer to his body. He walked down to the water’s edge and waded in as Daniel watched helplessly from the bank, his face stark. Quinn gently laid Cade down in the water. He seemed to float for a while, hair spreading about in the water like black smoke. His face was still, eyes closed as Quinn held tightly onto his cold hand, rubbing his thumb over the engagement ring. Quinn’s vision blurred as tears filled his eyes.
You need to let Cade go. Let him join his kind below the water. Trust me.
Taliesin’s voice was soft, compassionate. Quinn heaved a shuddering sigh as Daniel joined him in the water, laying a comforting arm on his.
“I can’t—” Quinn shook his head in grief, his heart breaking.
His uncle took hold of his shoulders, firmly holding him back. “There’s no other way, son. Let him go.”
Quinn relinquished his grip on Cade’s hand, standing there as he heard a soft splash and saw the water rippling around them. As they watched, two sets of pale hands emerged out of the water, and slowly, lovingly, Cade was dragged gently beneath the dark waters of the pond. Quinn saw the hand with his ring on it slowly disappear under the water. It was the last glimpse he had of the man he loved. 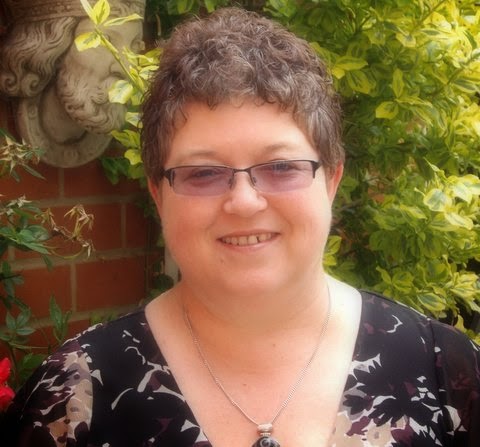 Susan Mac Nicol was born in Leeds, UK, and left for South Africa when she was eight. She returned to the UK thirty years later and now lives in Essex. Her debut novel Cassandra by Starlight, the first in a trilogy, was published last year by Boroughs Publishing Group in the US. Sue’s latest story, Double Alchemy: Climax is her sixth m/m romance.

Sue has written since she was very young, and never thought she would see herself becoming a Romance writer, being a horror/psychological thriller reader all her life. But the Romance genre is now something very close to her heart and she intends continuing the trend.

Sue is a member of the Romance Writers of America and the Romantic Novelists Association here in the UK.


Susan Mac Nicol is also author of The Magick of Christmas, Confounding Cupid, Cassandra by Starlight, Together in Starlight, Stripped Bare, Saving Alexander, Worth Keeping, Waiting for Rain and Double Alchemy. 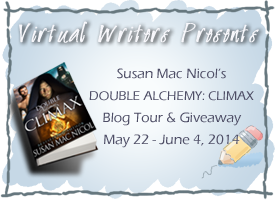 Email ThisBlogThis!Share to TwitterShare to FacebookShare to Pinterest
Labels: character interview, Mix It Up Monday