I’m going to pop the cork on a crisp Riesling on this hump day! My whine today is about Olympic withdrawal. I love the Summer Games as well, but the Winter Olympics are my very favourite. Probably the Canadian in me! All that ice and snow gets me excited! :D


At times over the past few weeks I felt guilty for my excitement for a sporting event considering Russia’s appalling human rights violations, particularly in regards to its LGBT community. The Russian government’s policies make me sad and angry, and I feel helpless to do anything about the situation. I can sign petitions, and I can rant at my TV when I see defacto dictator Putin spewing his garbage on the news. But what I can really do? Especially now that the Olympics are over, I hope the attention on the plight of LGBT Russians will not be forgotten.

I also think the Sochi organizers did a terrible job of selling tickets. There should never be empty seats at figure skating events in Russia! Russians love their skating, believe me. It was a sign of poor planning that there were empty seats at most venues. Why not just give tickets away the day of the events to fill the seats? I don’t get it.

But despite my issues with these Games, this week I really miss plopping down on the couch for far too many hours and watching sports I’d never normally watch—and some I’d never even heard of! There’s just something about the Olympic spirit and pursuit of personal achievement and patriotic pride that pushes my buttons. At least we only have two years to wait for the next Summer Games!

How about you? Are you in Olympic withdrawal too?

Enemies on the ice—lovers in the locker room

It was a real pleasure to write about figure skating—my favourite Olympic sport by a mile—in my new book. In Cold War I tell the story of two gay male pairs skaters who are rivals on the ice—and forbidden lovers in the locker room. It all starts with angry hate sex after a competition, and before Dev and Misha know it, they’re falling in love. 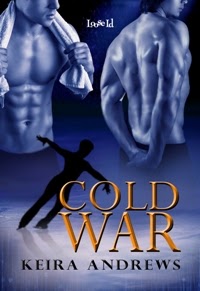 After an explosive locker room confrontation with his Russian rival ends in the most surprising and intense sex of his life, American pairs skater Dev Avira needs to refocus. He’s worked for years to win Olympic gold, and he can’t let himself—or his partner—down. Distraction in the form of steely and smoldering Mikhail Reznikov is the last thing he needs as he prepares for the biggest competition of his life.

But with the Games only days away, they can’t keep their hands off each other. Dev soon learns that beneath Mikhail’s arrogant and aloof exterior is Misha, a passionate man who warms Dev’s heart and scorches his bed. They're both determined to win, but for Misha his freedom could be on the line. Can Dev put his deepening feelings on ice as he goes for gold?

Available now from: Loose Id, Amazon and All Romance Ebooks

(p.s. Come back Friday for your chance to win a free copy of Cold War!)