Many of my dreams and fantasies have been woven into my stories.  And that’s one of the things I love about being a writer, I get to explore my fantasies and dreams no matter what they may be.  However that can also be a trap because the instinct can be to write your dreams and fantasies rather than experience them.  So today I thought I’d share a dream that I’ve never written about.   When Dominic and I had our commitment ceremony, we went on a European holiday as our honeymoon.  Dominic planned it and we spent an amazing two weeks together.    It was very special for the two of us.  And for the eighteen years since, he and I have talked about going back.

My dream is to take him back so that he and I can have the time, just the two of us, to explore places together.  Dominic and I do travel every year now, but none of those trips have the connection or the special meaning that this one did.  Realistically, I know that you can’t go back, that things change. But that’s what I want to do, regardless.  I want to take Dominic to the spa in Baden Baden and walk that path up into the black forest around Freiburg where he and I spent an afternoon, just the two of us, exploring forests that were essentially unchanged for hundreds of years.  More than anything I want to sit next to him as we float down the Rhine passing castles and vineyards that have stood for centuries.

It’s really funny, but as I take stock of my hopes, dreams, and fantasies, they all have one thing in common.  Even after twenty years of love, arguments, work, houses, disagreements… basically decades of life together, my hopes and dreams all have Dominic in them.  So maybe that in itself is a dream come true. 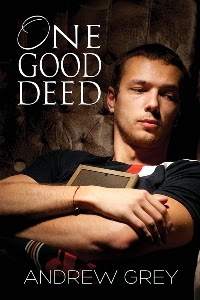 Luka Krachec immigrates to the United States to find his cousin dead and his cousin’s wife hospitalized after a terrible accident. He meets Peter Montgomery at the funeral. The American seems nice and captures Luka’s attention when he offers to help him with his English.
Peter has spent most of his life believing he shot his father at age six, and his family uses his regret and overwhelming guilt to keep him under their proverbial thumbs. Peter does his best to make up for what he did by helping others, and agreeing to help Luka with his English yields something amazing when they hit it off.

When Peter opens up to Luka about what happened when he was a child, Luka senses some holes in the story and suspects Peter needs some help, so he approaches the head of the psychology department at the college where he works. Neither expects to open a long-barricaded door to secrets, denial, and family manipulation.

One Good Deed is available from Dreamspinner Press.

“Excuse me,” he mumbled when he bumped into someone.

“It’s all right.” It was Peter, and he turned to smile at him. “Are you going to the luncheon?”

Luka nodded. He guessed he was. He saw Steven, who seemed to be following the crowd, so Luka did the same.

“Was the service similar to those back home?”

“Yes,” Luka said. “It was very comforting and nice. I’m glad my cousin was so well liked.”

“Your cousin was loved,” Peter told him. “He was always willing to help others. People relied on Josif, and he’ll be missed.” Peter motioned him forward, and they went into a large hall where tables and chairs had been set up. Everyone gathered and talked, taking places at the tables. Luka sat next to Steven, and Peter sat on the other side of him. More than once while they waited for the others to gather, Luka caught himself glancing at Peter, wondering what was behind the sadness he saw in those huge blue eyes. Something in Luka’s heart told him it wasn’t from the funeral today. It was much deeper than the loss of a friend. Whatever had happened to Peter had touched and maybe even scarred his soul. Luka shivered and looked away.

“You should see if Peter can help you learn English,” Steven said from the other side of him. “I was told you already have a job, and that’s great, but learning English will help you get along outside of the Serbian community.”

“Of course,” Peter said, and Luka turned toward him in time to catch his smile. “I’ll be happy to help you if you want.”

It was probably too soon for Luka to be making decisions, but he found himself nodding anyway.

“What did you do for a living in Serbia?” Peter asked.

The room quieted before Luka could answer, and the priest stood up at one end of the room. Everyone bowed their heads, and the priest said a blessing. Then people began getting up. Luka followed the others, and when the time came, he filled his plate and returned to his seat. Some of the dishes were familiar, but many were strange. He took a little of everything, even the green stuff with white things suspended in it.

Luka didn’t know what Peter meant until he tried the green stuff. It was sweet, chewy, and terrible. He swallowed and pushed it to the side. His mother had always taught him never to waste food, but in this case he was most definitely going to make an exception. If this was an example of American food, then Americans were certainly strange.

“That’s Jell-O salad,” Peter told him in a combination of English and Serbian. “Beware,” he added with a warm smile.

Luka wanted to laugh, but wasn’t sure it was appropriate, so he returned the smile and began eating again. As soon as he took the first bite of real food, his appetite kicked in and he began to eat quickly, his empty stomach demanding attention. The food was better than the green stuff, some of it familiar, like the sausages, called cevaps, similar to what his mother made.

“You didn’t tell me what you did,” Peter said from next to him.

“I worked in scientific research for the government,” Luka explained, but he gave no further details. His previous employer had not been particularly pleased with his decision to leave, and with the way he’d felt he had to leave, he knew he wouldn’t be readily allowed to return. “I really can’t talk about it.” Secrecy had become a habit he couldn’t easily break.

“Is that the kind of work you’ll be doing here?” Peter asked.

“I work for university here,” Luka said in English. “Josif help me,” he added. He hoped he still had the job and remembered the papers safely tucked in the bottom of the bag he’d carried with him. “I have papers.”

“Excellent. It sounds like you had some excitement getting out of Serbia."

Luka nodded. “It is free except when the government no want it to be.” He wasn’t sure if he made sense, but Peter nodded, and Luka smiled.

“Your English is pretty good."

“I learn in school, but not use much. I know is bad.” It sounded bad to his ears, but he forced himself to continue. He needed to get used to the language. Everything was, of course, much easier for him to say in Serbian.

“No, it’s not. You just need practice,” Peter said in Serbian. “First you need to begin to understand, and then you’ll feel more comfortable speaking. It’s very natural and something I’ve helped a lot of people with. I can help you too.”

“Okay,” Luka agreed. He’d been in America just a few hours and he’d already met someone who might be a friend. Maybe two someones, if Steven turned out to be as nice as Luka hoped. It would be nice to have a friend who was like him, though here it didn’t seem to be a big deal. 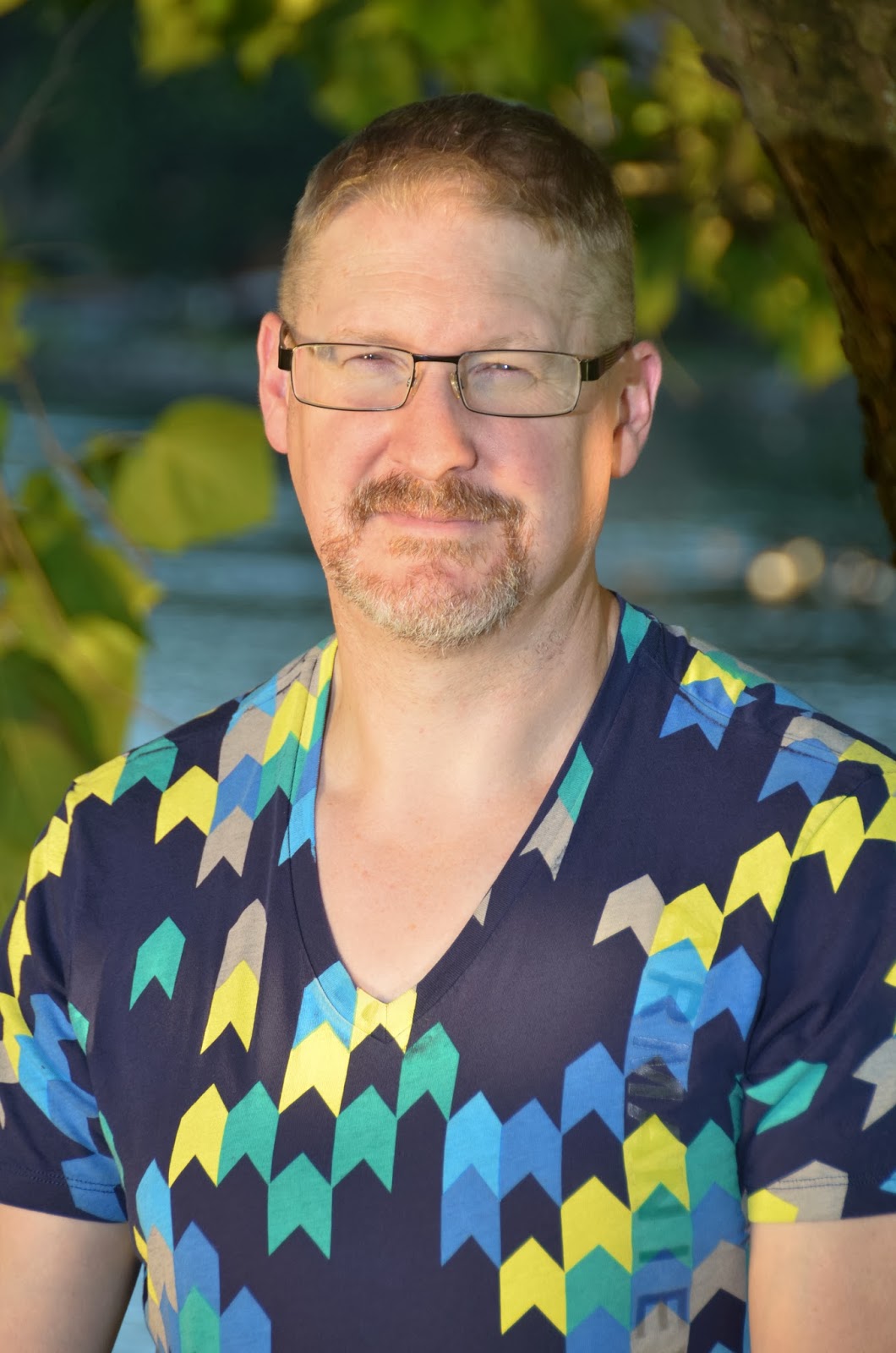 Andrew Grey grew up in western Michigan with a father who loved to tell stories and a mother who loved to read them. Since then he has lived all over the country and traveled throughout the world. He has a master’s degree from the University of Wisconsin-Milwaukee and now works full time on his writing.   Andrew's hobbies include collecting antiques, gardening, and leaving his dirty dishes anywhere but in the sink (particularly when writing). He considers himself blessed with an accepting family, fantastic friends, and the world’s most supportive and loving partner. Andrew currently lives in beautiful historic Carlisle, Pennsylvania.