Hi, I’m JL Merrow, and I’m delighted to be here as part of the blog tour to celebrate the release of Lovers Leap, my fast-paced romantic comedy with a leap year theme set on my beloved, native Isle of Wight. Lovers Leap features two very different young men—each of whom will need to take a leap of faith if their love is to survive! 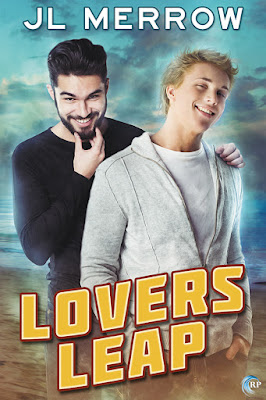 If they looked, would they ever leap?

Good-looking, confident, and doted on by his widowed mum, Michael is used to thinking only of himself. Getting shoved off an Isle of Wight pier by an exasperated ex ought to come as a wake-up call—but then he meets Rufus and he’s right back to letting the little head take charge. Rufus is cute, keen, and gets under Michael’s skin in a disturbing way.

Would-be chef Rufus can’t believe his luck when a dripping wet dream of a man walks out of the sea on his birthday, especially when Michael ends up staying at the family B&B. Life is perfect—at least until Michael has to go home to the mainland.

Rufus can’t leave the island for reasons he’s entirely neglected to mention. And though Michael identifies as bi, breaking his mum’s heart by coming out and having an actual relationship with a guy has never been his plan. With both men determined to keep their secrets, a leap of faith could land them in deep water.

Lovers Leap is also available in audio from Amazon and Audible!

JL Merrow is that rare beast, an English person who refuses to drink tea.  She read Natural Sciences at Cambridge, where she learned many things, chief amongst which was that she never wanted to see the inside of a lab ever again.  Her one regret is that she never mastered the ability of punting one-handed whilst holding a glass of champagne.

She writes across genres, with a preference for contemporary gay romance and mysteries, and is frequently accused of humour.  Her novel Slam! won the 2013 Rainbow Award for Best LGBT Romantic Comedy, and her novella Muscling Through and novel Relief Valve were both EPIC Awards finalists.

Leave a comment for a chance to win $29 in Riptide credit. Entries close at midnight, Eastern time, on March 5, 2016. Contest is NOT restricted to U.S. Entries. Thanks for following the tour, and don’t forget to leave your contact info!