I love food. I love everything about it, from the smell to the taste to the texture to the experience of eating it with good friends. That made writing At Your Service, which takes place in and around a Parisian bistro, an awful lot of fun. I thought I’d share some recipes for some of the dishes mentioned in the book. These are not my recipes, for the record. I am not a cook. I’m fortunate enough to have married a man who can cook, but a lot of these aren’t even his recipes. Links and references are provided for all of them.


Duck may well be my favorite food ever, and a well prepared magret de canard is a true treat. This recipe has a cherry balsamic reduction, which is wonderful if you can get fresh cherries, but that’s not always possible. Plus, not everyone likes fruit with their meat. This one is even simpler and doesn’t require fruit. Au cœur de terroir, the restaurant in At Your Service, serves their duck with a potato millefeuille. It’s like a pastry, except with potatoes. I couldn’t find the exact recipe, but this one is close.

Duck isn’t to your taste? What about a lemon caper sole? That’s Anthony’s choice for dinner the second night they eat dinner at Paul’s restaurant. Here’s one beautiful example.

Anthony’s boss is more of a lamb connoisseur. Her first selection off the menu is a seven-hour lamb. They aren’t kidding about melt-in-your-mouth.

This mushroom cannelloni recipe has cheese in it. The one we had in France had the alfredo sauce, but no extra cheese, so it was as light as it was flavorful.

And of course no French restaurant experience is complete without escargots. Patricia has never had them before. Anthony makes sure to remedy that (and get a little flirting in with Paul while he’s at it).

With dinner taken care of, it’s time to think about dessert. My personal favorite is mousse au chocolat. This one has some Grand Marnier to add to the flavor and texture, but you can also make it with brandy or with no alcohol at all.

I know not everyone is a chocolate addict, though, so if that’s not your thing, you could try a crème brûlée or its distant cousin the crème caramel. Don’t let anyone tell you they’re the same thing. They aren’t.

Of course there are baguettes and a charcuterie platter to start the meal and a cup of espresso or a tisane to finish it off (tilleul, please), but those aren’t really recipes to be shared.

And for a taste of how this all plays out in the book, here’s the first time Anthony and Patricia have dinner at Au cœur du terroir.

“We have two specials not on the menu tonight. Halibut with potato pastry and white asparagus, and duck breast in a red wine and balsamic vinaigrette sauce. And of course, the house-made ravioli stuffed with foie gras are always a favorite.”

“It all sounds delicious.” Anthony let his gaze linger on the waiter. Patricia wouldn’t care if he flirted a little. She’d probably encourage him. She was always after him to date more. Especially since…. Anthony pushed the thought away. He had better things to do than dwell on the past. Like gathering as much fodder for his fantasies as he could. “What’s your favorite?”

“The duck,” the waiter said immediately. “Everything that comes out of the kitchen is delicious, but the duck is exquisite.”

“I’ll let you look at the… menu. If you have any questions, I’ll be happy to answer them when I bring your drinks.”

“He’s cute,” Patricia said as soon as the waiter disappeared around the corner.

“He certainly is. That doesn’t make him gay or available, though.” He needed the reminder for himself. Fantasies were all well and good, but that was all this could be.

Anthony chuckled, as she’d no doubt intended. “There’s a halibut special as well as the salmon on the regular menu if you want fish. There’s a duck with red wine and balsamic vinegar if you’re in the mood for that. Or he mentioned a homemade foie gras ravioli. Can you read the rest or do you need me to translate it?”

“I think I can figure it out. I’ll ask if I have any questions.”

They spent the next few minutes in companionable silence as they studied the menu. Anthony already knew he’d order the duck simply because the waiter had recommended it, but he was famished, having skipped lunch in favor of staying at the booth to talk to the line of people waiting for them. “The charcuterie platter looks tempting. Do you want to split it with me?”

“You know I’ll eat anything you put in front of me,” Patricia replied. “Order it if you want and I’ll share it with you, and find a bottle of wine for us to share too.”

“I’m trying to convince him we aren’t on a date,” Anthony teased. “You’re not helping.”

“Sharing an appetizer or a bottle of wine doesn’t mean we’re on a date. Now if we were holding hands or something….”

Anthony snatched his hand out of reach before she could grab it. He didn’t know when the waiter would be back, and he didn’t want to ruin his chances, no matter how small, because the waiter saw Patricia holding his hand.

“What do you want me to order for you?”

“Is that lamb?” Patricia pointed to one of the items on the menu.

“Yes, seven-hour lamb, they call it. Slow-cooked and served with potato mille-feuilles. It’s like a pastry, only with potato slices instead of pastry dough.”

The waiter reappeared a few moments later. He set Patricia’s drink in front of her with a gallant little bow. When he turned to Anthony, he skipped the bow, but his gaze lingered as Anthony lifted the glass to his lips for a first sip. It was tart and dry from the aligoté with just the slightest hint of sweetness from the cassis.

“Just the way I like it,” he said, hoping he managed to convey more than his approval of the drink.

“I live to please.” The waiter’s voice deepened as he spoke, the husky timbre rubbing over Anthony’s nerves like a caress. He might have imagined the earlier interest, but he wasn’t imagining this. He couldn’t be. The moment stretched almost to the point of discomfort before the waiter smiled and asked what they wanted for dinner. The routine of placing their order—including a bottle of Hautes-Côtes de Beaune at the waiter’s recommendation—settled Anthony. 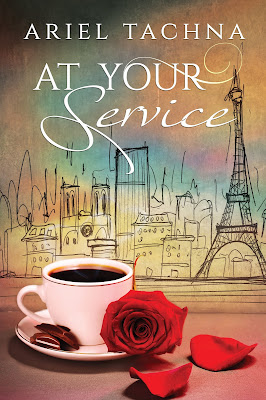 When Anthony Mercer walked into Au cœur du terroir, he was looking for good food and a pleasant evening spent with a friend. He never expected to meet—and sleep with—Paul Delescluse, a waiter at the restaurant. After spending a magical week together in Paris, Anthony must return to his life in North Carolina, while Paul remains in France.

Despite the distance and the lack of promises between them—Paul wants sex, not a relationship—Paul and Anthony forge a solid friendship. Then Anthony’s job takes him back to Paris, this time to stay. Paul is thrilled to have him back, but Anthony has a harder choice: be another of Paul’s conquests or fight for the relationship he knows they could have, if only Paul would believe it.

At Your Service is available in ebook from Dreamspinner Press.

Or, if you prefer paperback, also available from Dreamspinner.

When Ariel Tachna was twelve years old, she discovered two things: the French language and romance novels. Those two loves have defined her ever since. By the time she finished high school, she’d written four novels, none of which anyone would want to read now, featuring a young woman who was—you guessed it—bilingual. That girl was everything Ariel wanted to be at age twelve and wasn’t.
She now lives on the outskirts of Houston with her husband (who also speaks French), her kids (who understand French even when they’re too lazy to speak it back), and their two dogs (who steadfastly refuse to answer any French commands).