Celluloid Dreams of In the Middle of Somewhere by Roan Parrish


What I love most about romance films is how many different tools there are to express the intimacy between the characters: costuming, soundtrack and score, cinematography, editing. These are all the movie versions of the tools we use in fiction, of course—tone and sentence structure and word choice and where we begin or end scenes. They just seem more … tangible in film somehow, perhaps because I know that at a very practical level it’s one person’s job to choose a soundtrack that fits this romance, the clothes that define that character, the angle of shot that echoes this kiss. All the details that make a romance like Before Sunrise  different from Moulin Rouge , different from Roman Holiday , different from Let the Right One In , different from Giant, different from My Beautiful Laundrette . 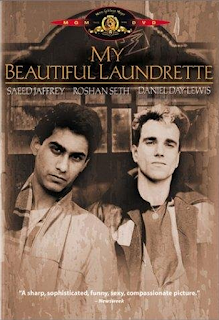 When I indulge in a dream of how my own romance, In the Middle of Somewhere, would translate to film, then (uh, not that I do this often, but for the purposes of writing this . . .), I’m flooded by all the moving parts that I can fantasize about. What would my score be like? How close up would I want the camera for this scene versus that one? What bric-a-brac would Rex have around his cabin? What would Daniel’s sheets look like? I’m actually obsessively detail-oriented anyway, so these are things I legitimately picture when I read and write. (You can check out my Pinterestboard about In the Middle of Somewhere for more on this.) More to the point, though, imagining the specifics of how I would express my book in a different medium invites me to revisit what my intentions with the book were in the first place. And, whether I was successful at communicating those intentions in the book or not (most likely a little of both), I think it’s an exercise I’ll use in the future to have another way of asking questions about things I’m writing.

What I come up with, then, is not so much THE film version of In the Middle of Somewhere that I would want, but all the different ways it could turn out with each set of choices. Perhaps my favorite film romance in recent years is Only Lovers Left Alive. Jim Jarmusch has this very particular pacing that I love—a kind of slow, lingering caress of certain scenes paired with a frenetic buzz in others. If he directed In the Middle of Somewhere there would be this elongation of the sensory scenes—Rex cooking, Daniel writing, Rex and Daniel staring at each other—and a jauntiness to the scenes between Daniel and Ginger and Daniel and Leo that echoes the way I tried to write them. Also, omigod, Tom Hiddleston as Daniel and Tilda Swinton as Rex?! I am dead of joy. 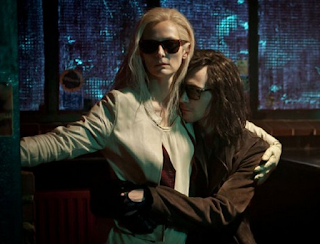 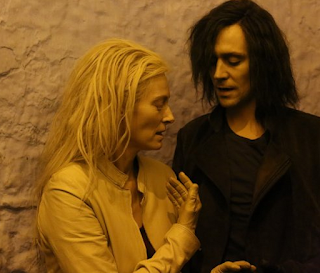 Because music is mentioned often in the book, I can imagine a soundtrack like TheCrow, where there is a combination of songs that play in the background and music that is actively being played by the characters within the scenes (Daniel listening to Tom Waits while he’s walking through the woods and runs into Rex, the music playing in Mr. Zoo’s where Leo works, Patty Griffin on the stereo at Ginger’s apartment in Philadelphia). Given that, the score could be modern minimalism so it wouldn’t compete—maybe I could get Nico Muhly to do it. (Speaking of, have y’all read his blog? It’s amazing.) Another favorite director of mine is David Cronenberg. I think if he directed In the Middle of Somewhere the tone of it would very much follow Daniel’s sense of the world: things that seem pleasant are just a cover for the sinister threats that lie beneath. In a Cronenberg version, the quiet streets of Holiday, Michigan would morph into something threatening as the camera found every smudge, scuff, and insect, and framed them all in high angle shots. Sludge, the coffee shop Daniel frequents, would be rendered like the diner in A History of Violence, with every cup and spoon becoming potential weapons, and the scene of Rex and Daniel cutting down a Christmas tree would include in-Daniel’s-head sequences that express how freaked out he is by the idea of people having saws. 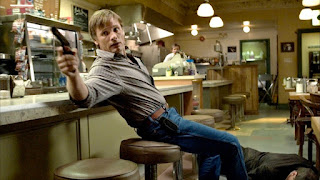 Of course, while writing this, I’ve also been imagining what In the Middle of Somewhere would look like if done in the style of some of romance films I mentioned at the beginning of this piece and it’s pretty epic. Like, In the Middle of Somewhere done in the style of Let the Right One In? The scene where Daniel first meets Rex in the woods would be terrifying jump cuts, with a score by Trent Reznor (really, shouldn’t everything have a score by Trent Reznor, though?). Rex’s secret would be that he uses his warm, homey cabin and caretaker persona to lure attractive people in and then drain their life forces to stay young forever. Or, ooh!, he uses them as secret ingredients in his recipes . . . bwah ha ha. Ginger would be the voice of reason, trying to tell Daniel something strange was going on but he, blinded by love, would dismiss her fears until it was too late. 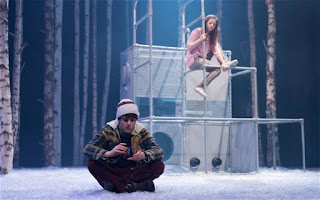 In the style of Moulin Rouge? Daniel would be all, “what the hell is up with all this singing. No, I will not sing,” and then bust into an angsty ballad à la Spike in the Buffy musical episode, “Once More With Feeling" . Rex would sing a bluesy standard with reluctance and some skill, demonstrating that all those years of acting out movies with his mom included at least a few musicals. Ginger’s songs would be dramatic scream-fest versions of eighties songs, like a heavy metal opera version of “All the Man I Need,” and Will and Leo would do a song together that Leo would treat as a duet and Will would treat like the battle rounds on The Voice. 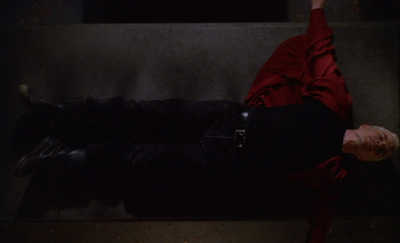 In the Middle of Somewhere

Daniel Mulligan is tough, snarky, and tattooed, hiding his self-consciousness behind sarcasm. Daniel has never fit in—not at home with his auto mechanic father and brothers, and not at school where his Ivy League classmates look down on him. Now, Daniel’s relieved to have a job at a small college in Northern Michigan, but, a city boy through and through, when Daniel arrives in Holiday, Michigan, it’s clear that this small town is one more place he just won’t fit in.

Rex Vale clings to routine to keep loneliness at bay: honing his large, muscular body until it can handle anything, perfecting his recipes, and making custom furniture. Rex has lived in Holiday for years, but his shyness and imposing size have kept him from connecting with people. Though he loves the quiet and solitude of his little cabin in the woods, Rex can’t help but want someone to share it with.

When Daniel arrives in Holiday, they are smitten with each other, but though the sex is intense and explosive, Rex fears that Daniel will be one more in a long line of people to leave him, and Daniel has learned that letting anyone in could be a fatal weakness. Just as they begin to break down the walls that have been keeping them apart, Daniel is called home to Philadelphia where a secret is revealed that changes the way he understands everything.

In the Middle of Somewhere is available now! 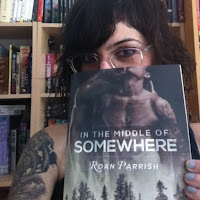 Roan Parrish grew up in Michigan and lives in Philadelphia, but is always a few minutes away from deciding to move. A former academic, she’s used to writing things that no one reads. She still loves to geek out about books, movies, TV, and music—now, though, she’s excited to be writing the kind of romantic, angsty stories that she loves to escape into.

When not writing, she can usually be found cutting her friends’ hair, wandering through whatever city she’s in while listening to torch songs and melodic death metal, or cooking overly elaborate meals. One time she may or may not have baked a six-layer chocolate cake and then thrown it out the window in a fit of pique. She loves bonfires, winter beaches, minor chord harmonies, and cheese. But mostly cheese.

You can check out Roan’s website and sign up for her newsletter, and you can come hang out with her in all the usual places: