On our cover for our latest release, Into the Dark Void, I actually had contacted a gentleman who I knew was going to be on an all gay cruise, and asked him if he and his lover would agree to pose for me for my next cover. They agreed. Now I just saw Steven a cute young guy, well built, and with assets that appeal to men and women. He is very cute, and I wanted him.

When I met his lover, I had no idea who he was other than another good looking man, taller, well built, and the right equipment. I posed for a picture with them before the shoot that I wanted for the cover and the other model asks, me, "Are you sure  you wanna do this?"

I looked puzzled and said, "sure, why wouldn't I?"

I replied, "No, other than Steven's boyfriend."

How sweet of him to worry. I wasn't worried in the least. My image is well; I'm a writer of male/male romance, and I wanted these two hunks on the cover of my next book co-written by Robert Cummings.

So, the ships photographer took a series of photographs over a period of a half hour in their private studio at sea, and I had my own self-directed cover shoot that was gonna be hot for the fans of my books. Dreamspinner art department took the photo that I chose and put the background on it, and there you have my first original cover! I had to of course, supply a ton of legal paperwork, releases from everyone and their grandmother, but I had done it right!

I hope the fans like it. My thanks to Austin and his boyfriend, Steven! And, by the way, two sweeter guys I couldn't have asked to pose for me. 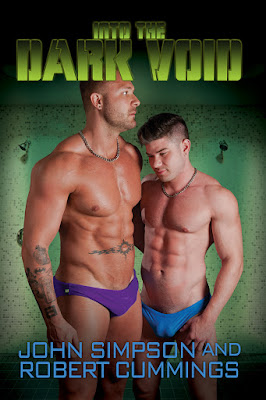 Into The Dark Void

Is Earth alone in the universe?

In an attempt to answer that centuries-old question, scientists sent probes into the void, hoping they’d be found by intelligent life forms. In hindsight, it’s decided that giving possibly hostile races directions back to Earth might be a dangerous idea, and the United Space Force Marines are dispatched to recover the probes.

Corporal David Creswell has become a little too close to Blake Bickford, a recent graduate from Marine training, and fraternizing is against regulations. They manage to keep their romance under the radar until they are reassigned to a classified mission to retrieve the probes—aboard a ship where they’re clearly not welcome. While trying to discover who is playing with Earth’s toys in deep space, they’ll give new meaning to “leave no man behind.”

Into the Dark Void is available from Dreamspinner Press.