Tuesday Spotlight on Lead Me Not by Ann Gallagher

Do you know Ann Gallagher?  We think you might.  :)  Check out her new release and make sure to checkout the giveaway too. 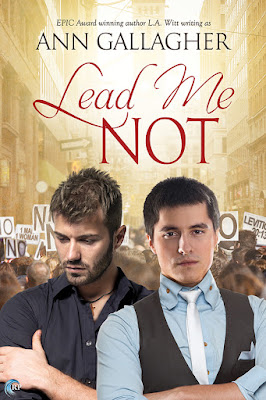 Isaac Morris has devoted his life to preaching against the sin of homosexuality. But when his sister proposes a documentary to demonstrate once and for all that it’s a choice—with Isaac choosing to be gay as proof—he balks. Until he learns his nephew is headed down that perverted path. Isaac will do anything to convince the teenager he can choose to be straight . . . including his sister’s film.

When Isaac’s first foray into the gay lifestyle ends with a homophobic beating, he’s saved and cared for by Colton Roberts, a gentle, compassionate bartender with a cross around his neck. Colton challenges every one of Isaac’s deeply held beliefs about gay men. He was kicked out by homophobic parents, saved from the streets by a kind pastor, and is now a devout Christian. Colton’s sexuality has cost him dearly, but it also brought him to God.

As the two grow closer, everything Isaac knows about homosexuality, his faith, and himself is called into question. And if he’s been wrong all along, what does that mean for his ministry, his soul, his struggling nephew—and the man he never meant to love?

Lead Me Not is available now from Riptide Publishing.

Every comment on this blog tour enters you in a drawing for a choice for a choice of two eBooks off Ann's backlist (including books written as L.A. Witt and Lauren Gallagher, excluding Lead Me Not) and a $10 Riptide Publishing store credit. Entries close at midnight, Eastern time, on August 29. Contest is NOT restricted to U.S. Entries. Don't forget to leave your email so we can contact you if you win!

Ann Gallagher is the slightly more civilized alter ego of L.A. Witt, Lauren Gallagher, and Lori A. Witt. So she tells herself, anyway. When she isn’t wreaking havoc on Spain with her husband and trusty two-headed Brahma bull, she writes romances just like her wilder counterparts, but without all the heat. She is also far too mature to get involved in the petty battle between L.A. and Lauren, but she’s seriously going to get even with Lori for a certain incident that shall not be discussed publicly.