Most of us feel strange, I think. And we all have to live in this world whether there's secret magic out there waiting for us or not.  When we wrote our novella Midsummer (Love's Labours 1) we wanted to capture the dreamlike feeling of being different enough to think that maybe, despite everything we know, magic might be a little bit realer than we think.


Midsummer is a bisexual m/m May/December contemporary romance set at a theater nestled in the Virginia Woods.  But it also features Michael, a character who needs contact with trees like the rest of us need oxygen, who reacts with profound physical fascination to extreme weather, and who, if he’s not careful, has a tendency to close his eyes and stumble his way into a long-lost graveyard.  He does all of these things cheerfully, reminds the people around him that he's just a boy that grew up in the Philadelphia suburbs, and tries, as much as he can, not to freak people out.

But sometimes, whether he means to or not, Michael can't help it.  Michael may not be a changeling, as he has to acerbically assure his boyfriend he's not on more than one occasion. He's just a guy trying to live the life he wants with the person he loves.  And if he's not quite like everyone else, he views that as a feature and not a bug.

In a lot of ways it was inevitable that at some point, Racheline and I would write a backstage story about a Shakespearean theater troupe. We’re both theater people -- she an actor and playwright; me, a techie and production designer. With our love of words and stories in general, we have a great soft spot for the Bard.

A Midsummer Night’s Dream called to us particularly as a setting for writing a non-paranormal romance that still might not be entirely of this world. We were captivated by the dreamlike quality of many of the productions we’ve seen (and worked on). And because we write LGBTQ stories, Racheline and I are intrigued by productions that explore the genders and orientations of the characters. In high school, Racheline played Lysander. Last summer, the Stratford Festival put on a four-actor production: Four people playing all the various couples of the play, all set as the backdrop of a same-sex marriage. And one of our favorites of course is The Globe’s 2013 production, which played up an unwritten queerness in the text and portrayed a physical relationship between Oberon and Puck.

We call Midsummer magical realism because of how it straddles the contemporary/paranormal line; it takes place in this world and obeys all its rules, yet it is not of it.  For us, Midsummer is about what happens when you're a rational person and everything around you and everything that you love is slightly, unprovably otherworldly. 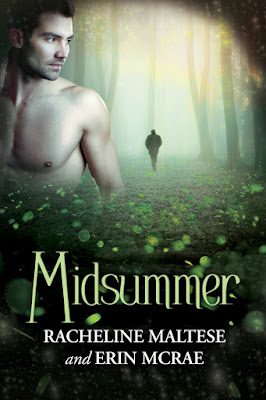 John Lyonel, a long-time theater professional and teacher, heads to Virginia to play Oberon in the Theater in the Woods’s production of A Midsummer Night's Dream, intending to focus on his work. John is recovering from the tragic loss of his family and needs a break. The last thing he expects is to become captivated by Michael Hilliard, the professional actor playing Puck, especially since John has never been attracted to men, let alone one so much younger.

They rush headlong into an affair which falls apart dramatically over secrets that John and Michael are keeping from each other. A steep learning curve, the gossipy cast of the show, and the sometimes sinister magic of the woods conspire to keep them apart. But stage lights and stars might work their magic and help them define a new future.

Costume fittings and dress rehearsals means that John finally gets to see Michael costumed as Puck. The human characters are dressed contemporarily, in suits and cocktail dresses that become increasingly disheveled as the show goes on. The fairies, though, are dressed in greens and browns with crowns of strange wildness -- thistles, cornsilk, and Queen Ann’s lace. Michael as Puck looks deeply inhuman, covered in leaves as if dragged in from the wooded grounds. For their first dress rehearsal, it takes all of John’s considerable experience and willpower to actually focus on the play and not Michael. As taken as Oberon is meant to be with Puck, he should actually be able to remember and deliver his lines.

“Whose idea was this?” he asks Michael afterward, catching him before he can change. Michael blinks at him with eyes done up in silver and green. John wants to devour him.

“Do you like it?” Michael asks, more distant and coy than usual, sliding his hands up John’s chest which, like his own, is bare.

All John can do is groan when Michael looks up at him from under his lashes. He stands on his tiptoes to kiss John briefly, and then vanishes. When he reappears he’s Michael again, in t-shirt and shorts, but John can’t forget the image of him transformed.

Midsummer is available from...

Erin McRae is a queer writer and blogger based in Washington, D.C. She has a master’s degree in International Affairs from American University, and delights in applying her knowledge of international relations theory to her fiction and screen-based projects, because conflict drives narrative.

Racheline Maltese lives a big life from a small space. She flies planes, sails boats, and rides horses, but as a native New Yorker, has no idea how to drive a car. A long-time entertainment and media industry professional, she lives in Brooklyn with her partner and their two cats.

Together, they are co-authors of the gay romance series Love in Los Angeles, set in the film and television industry -- Starling (September 10, 2014), Doves (January 21, 2015), and Phoenix (June 10, 2015) -- from Torquere Press. Their gay romance novella series Love’s Labours, set in the theater world -- Midsummer (May 2015), and Twelfth Night (Fall 2015), is from Dreamspinner Press. They also have a story in Best Gay Romance 2015 from Cleis Press and edited by Felice Picano. You can find them on the web at http://www.Avian30.com.