Talking on Tuesday with Alex Beecroft

Before starting to write the posts for this blog tour, I asked my readers if anybody had any questions they’d particularly like answered. They turned out to be a slightly random selection, but I’m going to round them up here.


1.     Does James have any favorites among Aidan's tattoos?

I think that would be the raven tattoo on his flank, which looks a little like this:

He also has a small raven on his neck that looks something like this:

Molly has a good eye for identifying Viking style!

2.     What is Aidan's idea of a perfect show of love between himself and James?

Honestly? I don’t think there’s any one thing in particular. Lots of things, like being proud of Aidan’s success instead of resenting it. Like cooking him food and looking after him when he’s ill, and not making him feel guilty and a bad person for being ill. Like buying the clothes Aidan picks out for him rather than wearing the monstrosities he would have picked for himself. Aidan’s not a particularly high maintenance sort of chap so he’s not expecting flowers and romantic dinners. He likes small, unthreatening, domestic things, like James meeting him for lunch and taking him for a walk beside the canal so they can feed the ducks together.

3.     Does Aidan have any particular favorite medium or style to sculpt?

He’s on a Minoan kick at the moment, producing pottery a little bit like the octopus pot here. He’s a big fan of Paul Dachsel and Beatrice Wood and tends to make pottery and small sculptures in that sort of naïve style. (Which James likes very much because it lies very close to his love for the Bronze Age.

I definitely do plan to write more books involving asexual MCs. I don’t have any specifically planned out at this point, but now that I’ve become aware that there is an asexual community out there actively looking for representation, you can be sure that will be in the forefront of my mind. (The same goes for bisexual characters btw. And aromantics and agendered people. All the invisibles!)

I actually have not yet read another romance featuring an ace character, so I’ll have to fall back on recommending Sherlock Holmes – who is totally ace, don’t try to deny it. And The Hunger Games books, because Katnis Everdeen is clearly ace too and I found it really comforting to see.

5. Will there be any more Trowchester books after this?

My muse is haphazard and flighty, so I can’t guarantee anything. But I can say that I’ve definitely got an idea for another Michael and Finn book.

I’m currently writing book 2 of a three book space opera. So I’m looking at finishing that, starting and finishing book 3, writing a follow up to The Wages of Sin and re-releasing that. And then my plan is to write another three Trowchester books, starting with the Michael and Finn book and trying to think of two others to follow it with at that point.

6.     Does Billy from Blue Eyed Stranger know Chris from Under The Hill?

Oh! What a really interesting idea. Given that they’re both morris dancers, they have probably rubbed shoulders at one of the big festivals, like Rochester Sweeps or the Straw Bear Festival, but probably not more than that. I imagine that Chris’s side – Matlock Village Morris – have got a reputation such that nobody ever goes to dance with them twice. Not because they’re unpleasant or bad hosts, but because well, it’s a little eerie up there, isn’t it? And three sides who went and danced with them lost musicians as a result – two fiddlers and a piper, vanished from the face of the earth.

7.     What's your favourite kind of museum? What would be your ideal museum to visit? If someone made a museum celebrating your life & work, what would be in it?

I like the kind of museum that has a little bit of everything in it. The FitzWilliam in Cambridge is a favourite of mine, though I also love the museum of Archaeology and Anthropology. I enjoy museums like the museum of the moving image and the science museum, but I don’t really feel they’re really museums, if you see what I mean? Not enough potsherds or jewellery.

Ha! I think there’s about enough to fill a display case. One copy of each of my books, a photo of my family, and my bodhran and pennywhistle. Maybe a video display of dances from each of my morris sides. (I have three now!)

Thanks so much to everyone who sent me questions. You are marvelous human beings and I couldn’t have done this without you. 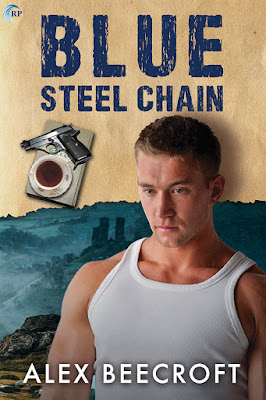 At sixteen, Aidan Swift was swept off his feet by a rich older man who promised to take care of him for the rest of his life. But eight years later, his sugar daddy has turned from a prince into a beast. Trapped and terrified, Aidan snatches an hour’s respite at the Trowchester Museum.

Local archaeologist James Huntley is in a failing long distance relationship with a rock star, and Aidan—nervous, bruised, and clearly in need of a champion—brings out all his white knight tendencies. When everything falls apart for Aidan, James saves him from certain death . . . and discovers a skeleton of another boy who wasn’t so lucky.

As Aidan recovers, James falls desperately in love. But though Aidan acts like an adoring boyfriend, he doesn’t seem to feel any sexual attraction at all. Meanwhile there are two angry exes on the horizon, one coming after them with the press and the other with a butcher’s knife. To be together, Aidan and James must conquer death, sex, and everyone’s preconceptions about the right way to love—even their own.

Available from Riptide Publishing on July 27.

Beecroft won Linden Bay Romance’s (now Samhain Publishing) Starlight Writing Competition in 2007 with her first novel, Captain’s Surrender, making it her first published book. On the subject of writing gay romance, Beecroft has appeared in the Charleston City Paper, LA Weekly, the New Haven Advocate, the Baltimore City Paper, and The Other Paper. She is a member of the Romantic Novelists' Association of the UK and an occasional reviewer for the blog Speak Its Name, which highlights historical gay fiction.

Alex was born in Northern Ireland during the Troubles and grew up in the wild countryside of the English Peak District. She lives with her husband and two children in a little village near Cambridge and tries to avoid being mistaken for a tourist.

Alex is only intermittently present in the real world. She has led a Saxon shield wall into battle, toiled as a Georgian kitchen maid, and recently taken up an 800-year-old form of English folk dance, but she still hasn’t learned to operate a mobile phone.

She is represented by Louise Fury of the L. Perkins Literary Agency.

Every comment on this blog tour enters you in a drawing for a signed paperback from Alex Beecroft's backlist. (Any title which has a paperback edition, excluding Blue Steel Chain.) Entries close at midnight, Eastern time, on August 1. Contest is NOT restricted to U.S. entries. Don’t forget to add your email so we can contact you if you win!