How does one character seduce another?

This thought swirled through my mind as I stirred my French vanilla creamer into my coffee. Seduction is hardly the same for every person. Some seek a gentle more sensual persuasion, a swamping of the senses to sweep them under. These types of scenes are filled with rushes of powerful emotion and intense strings of thoughts tied to action. While others yearn to be taken. Yes, taken, a carnal, hedonistic, fierce, sometimes dirty scene that drags a reader in. These are obviously two extremes, but you get the picture. ;)

I considered these methods of seduction over coffee and later into the day, sipping wine. What would pull the reader in and seduce them as effectively as the characters? How could I help those devouring the words understand that it wasn’t only a desire to be with the other person but an elemental need?

I found the answer within the mind of my character, Liam. Blind, he pulled on his senses, hearing, taste, touch and smell. Seduction rode the line with wicked words and sensual caresses. I was tugged in and immersed so completely that the words flowed out.

With every book I find I have to get to know who my characters are even as they come from my mind. So, I hope my newest guys from Wolf’s Sacrifice can lure you in to persuade your emotions to rise and seduce your senses. 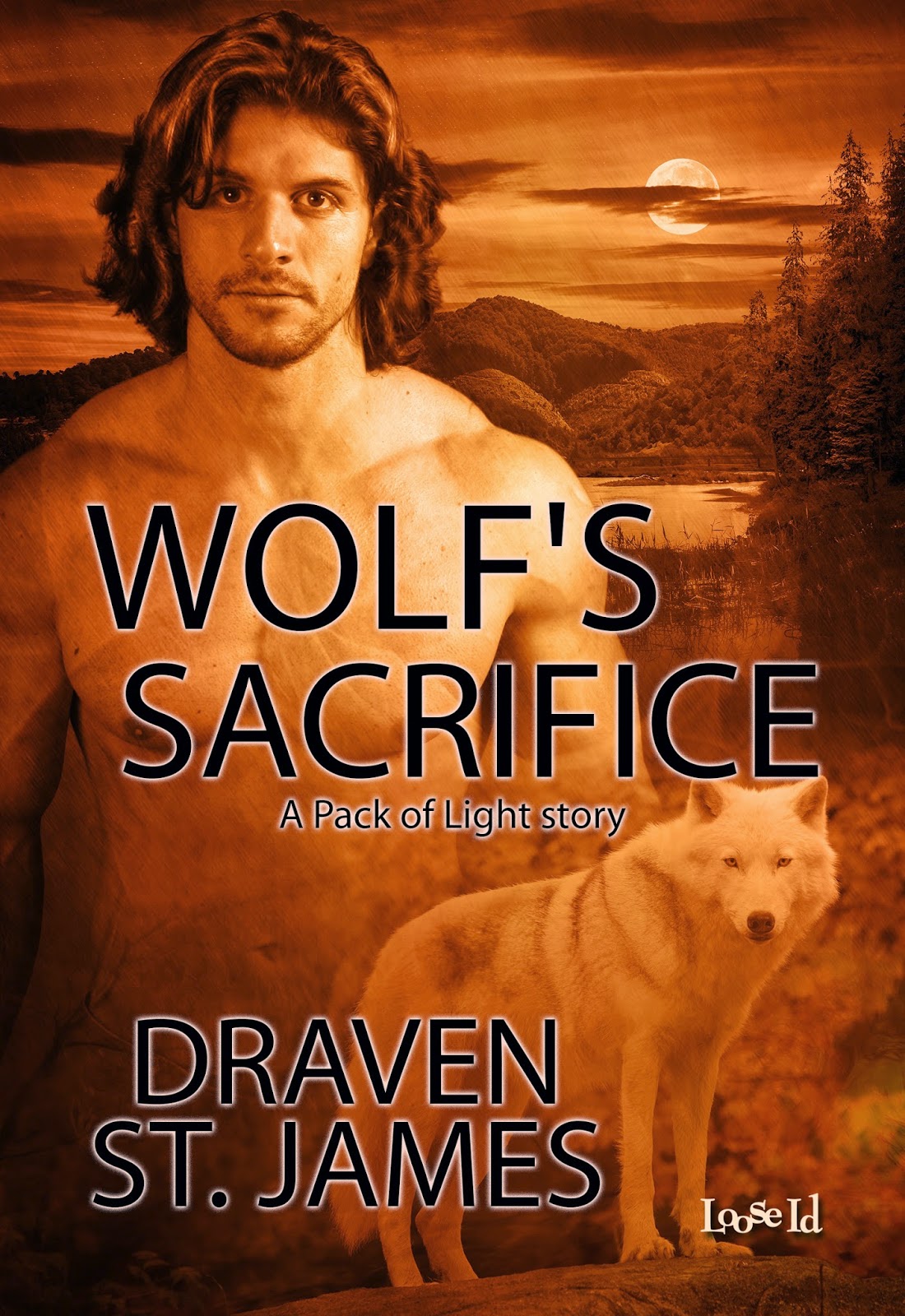 Sean Maddox has one basic goal: to protect the Northwest Pack. That priority helps him stay grounded—until the day the pack rescues Liam. Suddenly Sean is finding any excuse to be around the sweet, blind shifter. But trying to focus his thoughts on keeping Liam safe and not exploring the whole laundry list of carnal fantasies he's been having is anything but grounding. It doesn't help that Sean's wolf makes it damn clear it believes Liam belongs to him.

From the first deep breath of Sean Maddox's intoxicating scent, all Liam wants to do is strip naked for the sexy beta and let the wolf claim him. Hiding away his desires seems like the best plan, given after a lifetime in captivity Liam is just learning what it means to be free. What does he know about being a mate? More to the point, would Sean even want him if he knew the truth?

As Sean and Liam struggle with their growing craving for each other an old enemy steps out of the shadows. With secrets lurking and fate twisting two worlds together a sacrifice must be made, but can the two mates live with the consequences?

Wolf's Sacrifice is available from Loose-Id, Amazon and ARe.

Excerpt
While he was certain Liam didn't intend for it to be a sensual strip tease, Sean's mind drifted in that direction anyway. Birds sang and the wind bellowed, while Liam's hands danced over the contours of his body.

"I can feel you staring at me," Liam accused, although amusement colored his words. The levity kept him from turning away and giving Liam privacy.

"I'm just standing here," he replied in a low rough voice. Standing there envisioning someplace much more private so he could do wicked things he shouldn't be considering.

"Uh huh." Liam shrugged his shirt from his shoulders and Sean bit his lip to keep his groan at bay. Screw the water, he wanted to press the man to the ground and lick him from head to toe.

Facing him directly as though Liam could actually see him, Liam toed of his shoes and shimmied out of his pants. He did manage to keep on a snug pair of black boxer briefs Sean had taken him shopping to get.

"No more than this," Liam said with a stubborn twist to his lips. The words effectively jerked him into the present. "I may not be able to see you looking at me, but I can feel it."

"Oh?" His curiosity peaked at that admission, but he left the statement alone, for now. Deep within he wanted to know everyone about Liam, but didn't want to push so hard the man locked him out. The last thing he needed was for Liam to know how much he wanted him to remove that last scrap of clothing.

"Well?" Liam held his hand out. "I need some direction here."

Sean grinned and closed the distanced between them. He laced their fingers together and directed Liam toward the edge of the water. "The rocks are a bit slippery, so be careful."

He waded into the chilly water and towed Liam in after him, not surprised when the man gasped, "Shit, that's cold. Are you sure we should be doing this?"

"I swim here every morning. Your body will adjust."

"Or you're crazy," Liam muttered under his breath. "It'll adjust when hypothermia sets in."

He chuckled and carefully turned away from the lake so he could direct Liam out into the water. "Come on. Today I won't throw you into the deep. It will be about getting you comfortable with the water."

"Define comfortable? You'll leave me in here until I'm too numb to climb out?"

"No, smartass," Sean responded with a snort. "It's about you feeling the stones under your feet and the slight current along your body."

Liam's face crinkled into a looked of disgust. "It feels gross down there."

"There is moss covering the floor of the lake. I promise it isn't anything that is going to come out and grab you." Sean brushed his thumb over Liam's hand in reassuring gesture. "I'll protect you."

"I know this lake like the back of my hand. I've been swimming here since I was a boy. I probably can map out about every rock."

The chill from the water was a relief from the heat the sight of Liam's nearly naked form inspired. The man's pale body reflected off the surface of the water, his narrow waist, and slim toned torso. The fall of his hair danced around his shoulders from the soft breeze that blew across the lake. His brow furrowed in concentration.

Sean had never taken anyone to the lake with him. He considered it a private place, one he now shared with the puzzling man before him. A man who he wanted to unraveled to reveal all his secrets and protect him from any harm that may still be lurking in the shadows. Now if Liam weren't so damn stubborn.

Liam screeched, slipped and fell against him. "Something touched my leg."

Liam's arms snaked around his body as he tried to climb Sean's form to the point his legs had a strangle hold on his waist.

He laughed. "There are fish in the water and sometimes you'll feel them glide over your skin, but they won't hurt you."

"You couldn't have told me that sooner?" Liam released the grip he had around his torso with his legs.

He groaned when Liam slid along his body and right over an erection that hadn't deflated since Liam had released the first button from his shirt.

A soft exhale of breath met his response and Liam's arms remained around his neck. He mapped out each knob of Liam's spine and settled on his hips. The midline length water concealed the way he held Liam lower body plastered to his.

"I would have told you," he said gruffly. "I wasn't aware the fish would take such a liking to you."

With one damp hand he brushed the locks of Liam's hair behind his ears. The remaining water trickled along Liam's neck making a path along the curve of his neck and over Liam's nipples, pebbled from the cold.

Sean cupped the side of Liam's face and traced his thumb across the lips he so badly wanted to explore. The heated flick of a tongue against the pad of his thumb broke his resolve and he leaned in until a breath of space remained between them.

"Liam, if you're done playing hide the water snake with beta Sean, we need to go do that work thing," Cory's voice shattered the moment.

Draven St. James is a born and raised Oregonian. Draven has travelled extensively in search of mischief and mayhem to fill the pages of each new story. Draven’s ventures have been quite successful in inspiring a wealth of tales. Of course at the end of the day, coffee within reach, laptop at the ready is where Draven finds peace.