“Thanks for trying, but you really don’t have to. Really.”

Satish gritted his teeth like he was trying not to snap. “But it’s what you want. What you need.”

“Sometimes, yeah.” James pulled his knees up to his chest, trying to make himself feel less naked and vulnerable. “But not now. Not with you. It’s not your thing and I’m okay with that. Better than okay.”

“But you want it with him.”

The tone was just short of accusatory, catapulting James from concern to defensiveness. “Yeah, sometimes I do. You got a problem with that?”

Satish snorted. “No, but you can be damn sure he has a problem with me.” He flung himself off the bed, beginning to gather his clothes in a nearly identical repeat of the way he’d left the last time.

“Fuck, not again.” James raked his fingers through his hair and rose, grabbing Satish as he snatched his shirt off the back of a chair. “Satish. Just stop. Please. Please?”

Satish stood there a moment, his eyes landing anywhere but where his gaze might intersect with James’s. Then his shoulders dropped infinitesimally and he let the shirt go. “Fine. Okay. Sorry.” He sat back down, dragging the edge of the bedspread over his own nudity. “Shit. I don’t know if we can do this. It’s just too big a fucking mess.”

“Is it seeing a guy who’s not exclusive with you?” James ventured, his heart sinking. “Or is it . . .” He gestured to his bruises in illustration. “Like, if I was just a normal vanilla guy who happened to be seeing someone else at the same time as you, without the bruises and the whole ‘Professor’ thing, would you be as torn up right now?”

Satish choked out a watery laugh. “Makes me sound so small-minded, but I guess not,” he said. “You can’t really separate the two, though. You’re not a normal vanilla guy, and that’s why there’s no chance you’d ever be exclusive with me. You . . . need things I probably won’t be able to give you, so maybe this isn’t going to work.”

“Did you stop to think that maybe the things I need are exactly what you can offer me?” James traced a fingertip down the ridges of the sponge-textured plaster of the wall. “Maybe sometimes I need something--someone--that isn’t all mixed up in that. There’s a reason we clicked that day in the store, and it had nothing to do with my kinks.”

“Is that really what you were after? Or were you just looking for the anti-him?”

“I hadn’t thought about Carson in two years before that afternoon.” James pushed himself away from the wall and sat next to Satish, pulling his knees to his chest again. This time it was more from the need to hold onto something than to cover himself. “Okay, that’s not true. I definitely thought about him, but as far as I was concerned, that was all over and done with. He was in the past and if I hadn’t accidentally texted him, he would have stayed that way. It wasn’t an issue. I started flirting with you because I liked what I saw. He didn’t factor into it.”

“If he didn’t factor into it, then why not just stay broken up? Before you texted him, I was enough for you, wasn’t I? Why can’t I be enough for you now?”

James swallowed. “Honestly? Even if he hadn’t come back into my life, I was always going to need him . . . or someone like him. I was denying it to myself for that couple of years, but now I realize just how much better life is for me when I have this. It’s part of me, even if I pretend it isn’t. Maybe for a while, we could have been just the two of us, but eventually I would have gotten stressed out or freaked out to the point where this was the only thing that could center me again, and something would have to give.”

“So I would never have been enough for you. Not unless I could do that for you.” Satish plucked at a loose fiber hanging from the edge of the bedspread.

James closed his eyes and sighed, leaning his cheek on his knee. “I’m sorry, but that sounds about right. I wouldn’t hold it against you if you decide you’re not okay with that. In a way, it’s kind of lucky it happened like this, because it’s not too late for you to make a clean break. Who knows when we’d be having this conversation if I hadn’t texted him. We’re not too deeply involved yet.”

James nodded. He couldn’t deny that there had been something stronger than mere attraction almost from the first with Satish. It was way too early to be throwing around words like love, or talking lifetime commitments or any of that, but he’d be lying if he acted like it had been just a normal hookup. “We’re definitely something,” he choked out.

Satish blew out a long, slow breath. “Okay, look, here’s the thing. I can be okay with not being exclusive, within certain boundaries and with some rules and understandings. You’re right, I’d probably be fine with it if you didn’t come back to me with bruises, so yes, I’d be a small-minded prick if I said I wouldn’t be fine with it when you do. But your . . . Professor. Carson. Whoever the hell he is. He won’t be.”

James scoffed. “Oh, please. Carson’s the least jealous person on the planet. Not only will he not mind, he’ll get off on knowing I’m out there with someone else.”

“I don’t want him to get off!” Satish glowered for a moment, then he sighed again. “In any event, you’re wrong. I don’t know what his deal is, but trust me, he’s definitely jealous.”

The idea was so absurd that James couldn’t help but smile. Whatever it was Satish was imagining, there was no chance that Carson had any issue with James having another relationship on the side. But he wasn’t about to argue about it here and now. “Even if you’re right, it doesn’t matter. He doesn’t make my decisions for me anymore. Not in this, at least.” He smiled and stretched his legs out, rolling to his knees and crawling the small space toward Satish.

“Now, since we’re not calling it quits, can we get back to what we were doing?”


Contest Info:
If you haven’t fallen in lust with the Professor, yet, now’s your chance! We’ve got two ebooks to give away to two lucky commenters: one copy of Giving an Inch, and one of An Inch at a Time. That’s two chances to win! Let us know your thoughts and hopes for the rest of the series! Be sure to include your contact info (email, Twitter, or Facebook!) on this or any of the other of the posts on this tour for a chance to win. More comments=more entries, so to increase your odds of winning, be sure to follow the entire tour! We’ll pick a winner New Year’s Eve, so you can start 2014 right! 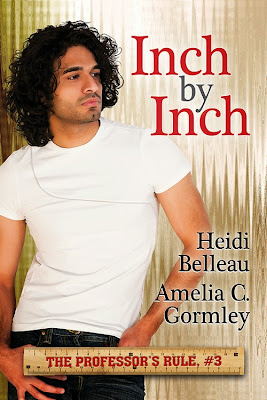 Inch by Inch (The Professor's Rule #3)

After two long, kink-free years apart, James Sheridan has reunited with his Professor: the sexy, dominant Evander Carson. But this time, things will be different. James is older, more sure of himself, and confident that he can draw the line between Carson’s demands and his own principles.

One of those lines is gorgeous menswear salesman Satish Malhotra. After their steamy dressing room encounter, James feels an unexpected connection to Satish, and he wants to explore it further. But Carson’s involvement—in James’s life, and in James and Satish’s budding relationship—complicates things.

Carson’s penchant for using other men in their sex games has always troubled James, and he’s adamant that Satish not be just another notch in their whipping post. But when Satish learns what prompted James to pursue him in the first place, will James’s new ability to draw the line even matter?

Click here to read an excerpt or purchase Inch by Inch (The Professor’s Rule #3.)


Heidi Belleau was born and raised in small town New Brunswick, Canada. She now lives in the rugged oil-patch frontier of Northern BC with her husband, an Irish ex-pat whose long work hours in the trades leave her plenty of quiet time to write. She has a degree in history from Simon Fraser University with a concentration in British and Irish studies; much of her work centered on popular culture, oral folklore, and sexuality, but she was known to perplex her professors with papers on the historical roots of modern romance novel tropes. (Ask her about Highlanders!) Her writing reflects everything she loves: diverse casts of characters, a sense of history and place, equal parts witty and filthy dialogue, the occasional mythological twist, and most of all, love—in all its weird and wonderful forms. She also writes queer-flavoured M/F as Heloise Belleau.